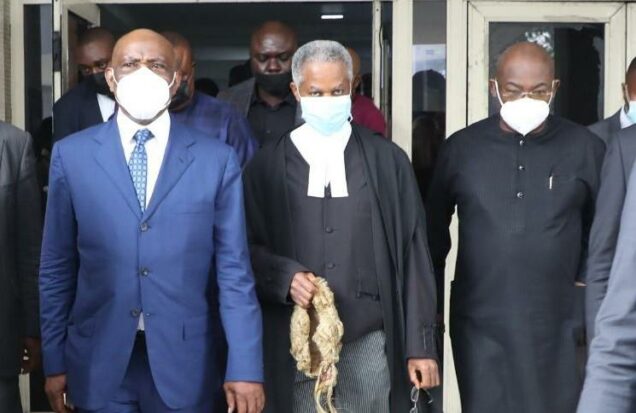 Governor of Rivers State, Nyesom Ezenwo Wike on Tuesday appeared before the State High Court in Port Harcourt, to testify as a witness in a N7 billion libel suit against THISDAY Newspaper.

Governor Wike, said he was in court to seek justice and clear his name as a person from the malicious publication by THISDAY Newspaper.

He claimed the paper portrayed him as deceitful, untrustworthy person, who exerts subterranean influences on judicial matters and over court sittings in Port Harcourt.

The defendants in the suit are THISDAY Newspapers Limited, Leaders and Company Limited, Davidson Iriekpan, Chuks Okocha and Adibe Emenyonu.

Wike told Justice A. Enebeli, asserted that the defendants maliciously and falsely portrayed him as an unreliable friend/person.

In his written statement on oath, Governor Wike had stated that the defendants had accused him of influencing the decision of the Court sitting in Port Harcourt that granted an injunction restraining Godwin Obaseki from participating in the primaries of Peoples Democratic Party (PDP) in Edo State in 2020.

He stated that the defendants maliciously accused him of undemocratically exerting influence on the primaries process of PDP in Edo State in aid of his ally, Omoregie Ogbeide-Ihama, who was the beneficiary of the court order restraining Obaseki from participating in the PDP primaries.

According to him, contrary to well known journalistic tradition and practices, the defendants did not investigate properly to ensure the information they relied on was accurate.

“They did not seek to verify the facts from me or in any manner oblige me with the opportunity to state my own side of the story before proceeding to make the false publication.”

Governor Wike stated that the defendants further denigrated him before the entire world as a fake democrat, who engages in meddling in the internal affairs of All Progressives Congress, in order to get at his political foe, Chibuike Amaechi.

The governor explained that he is not a member of the APC and have had no hand in the internal crisis which has bedevilled the party both in Rivers State and all over Nigeria.

The governor, while responding to claim by lawyer to the defendants, Turudu Ede, SAN, that the essence of the lawsuit was to intimidate and harass his clients, said the whole essence of the suit was to get justice and clear his name as a man of substantial character, honour and repute.

“The essence of the suit is to get justice since they (defendants) refused to retract the publication or apologise. So, I sued them to clear my name.”

The court adjourned the matter for further hearing till 12 January 2022.