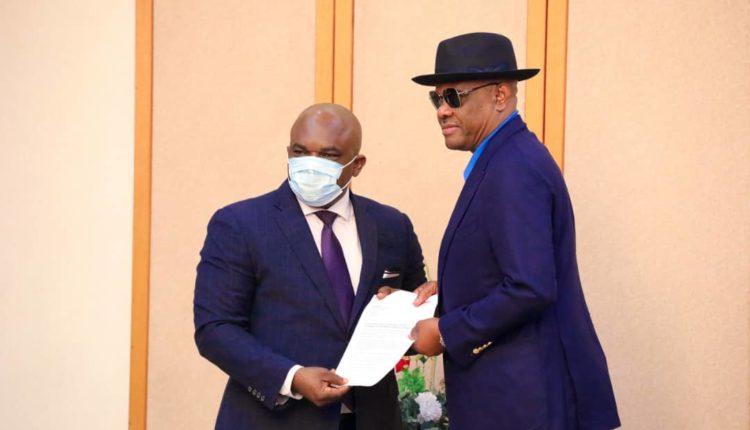 Governor of Rivers State, Nyesom Wike, has said the historic legal battle between Rivers State government and Federal Inland Revenue Service (FIRS) on the Value Added Tax (VAT), will be a test case to Nigeria’s respects for the rule of law or otherwise.

He said the decision of the state government to seek judicial interpretation on VAT collection, is aimed at strengthening rule of law and Nigeria’s democracy.

The governor stated this when the Managing Director of BusinessDay newspaper, Dr. Ogho Okiti led a delegation to present a letter of nomination to him as the “BusinessDay Most Impactful Governor Award” at Government House, Port Harcourt on Monday.

Wike commended the management of the newspaper for acknowledging the numerous projects his administration has accomplished since 2015 saying the award conferred on him is for the entire people of Rivers State.

He adde that beside the implementation of physical projects in the state, another project that is dear to him is making sure that the rule of law is respected and applied in the country.

He explained that when the legal issue on VAT collection between the Rivers State government and FIRS came up, some people had accused him of trying to divide the country, even when they had not bothered to take a look at the 1999 constitutional provisions regarding the collection of VAT.

“I am happy today that the Attorney General (of the Federation) has gone to the Supreme Court to sue Rivers State government over VAT. Now, that Attorney General has gone to court, we are happy. But, nobody wants to talk about him dividing the country. It is only when Rivers State government goes to court that they will say we want to divide the country.

“There is nothing wrong in interpreting the law. The judiciary has been given assignment and they took oath of office to interpret the law. If you don’t go to court, how will we know the position of the law. How will democracy thrive? How will we know that this country respects rule of law?”

Governor Wike revealed that even the Senior Special Assistant to President Muhammadu Buhari on Niger Delta Affairs, Senator Ita Enang, was among those that commended him for approaching the court over the VAT matter.

He said it is however baffling that the same presidential aide could turn round to accuse him of treating judges badly in the State.

The governor reiterated that the Rivers State government would not succumb to any committee set up by the Federal Government on autonomy of State judiciary. According to him, such committee is unnecessary, since the 1999 Constitution explicitly guarantees the independence of the judiciary.

Governor Wike noted though the Federal Government tend to profess it supports autonomy of the judiciary, but in reality, it has deliberately stifled that arm of government.

The Rivers State governor said the BusinessDay award will spur his administration to do more for the people of the state adding that he does not subscribe to the idea that governors should relent in service delivery in their second tenure.

The Managing Director of BusinessDay, Dr. Ogho Okiti, said the award was conferred on Governor Wike based on the newspaper’s observation of his achievements since he assumed office in 2015.