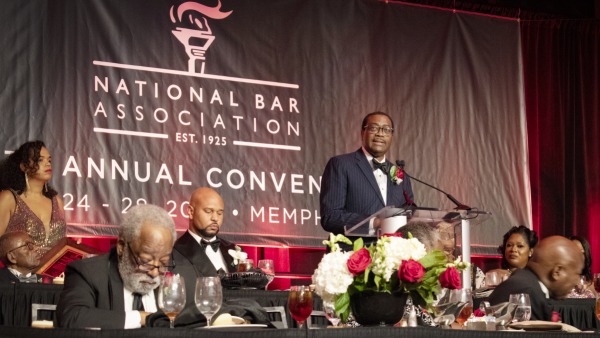 Other award recipients include the NBA’s chief policy officer, Alicia Hughes, who received the organization’s highest award; Hajia Alima Mahama, Ambassador of the Republic of Ghana to the United States; and Kamil Olufowobi, CEO, Most Influential People of African Descent (MIPAD).

Moore cited Adesina’s transformative role as head of the African Development Bank, and as a former Nigerian Minister of Agriculture.

Receiving the award, Adesina lauded the late Ron Brown as an inspirational figure who believed that “every idea was an impossibility, until it is born.”

As President of the African Development Bank Group, Adesina said he and his team set out to accomplish the seemingly impossible. This included the largest ever general capital increase in the bank’s history, from €90.94 billion to €203.39 billion; a transformative High5 development strategy that has impacted 335 million Africans in six years; and the creation of the Africa Investment Forum, the continent’s premier investment marketplace, which has attracted €107.56 billion in investment interests in Africa, over three years.

Adesina, who dedicated the award to his wife Grace—”his inspiration and greatest supporter,” —said: “I thank all my staff and the management of the Bank for their exceptional work, and our Board of Directors for their incredible support. They make our ideas come to life. They turn impossibilities into possibilities.”

The National Bar Association was founded in 1925 and is the oldest and largest national network of predominantly African-American attorneys and judges. It represents the interests of approximately 65,000 lawyers, judges, law professors and law students. The NBA is organized around 23 substantive law sections, 10 divisions, 12 regions and 80 affiliate chapters throughout the United States and around the world.