Two Years After, Wike Queries Why Amaechi Has Not Been Punished For Shutting Down Judiciary 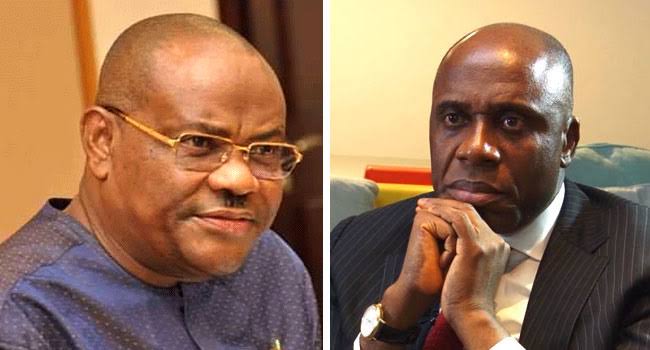 Rivers State Governor, Nyesom Wike, has described closure of courts in the state for nearly two years by the immediate past administration of Chibuike Amaechi as coup against the judiciary. He regretted that Nigeria is the only country where persons, who violate the sanctity of the third arm of government go unpunished.

The governor made the assertion at the New Year state banquet in Government House, Port Harcourt on Sunday night. Wike said it was outrageous for his predecessor, who closed courts for almost two years and denied people access to justice, to claim Rivers State has been badly governed since 2015.

Wike said it was ludicrous for Amaechi, whose eight years reign in office allegedly epitomised maladministration, to accuse his government, hinged on rule of law of bad governance.

“I am happy that even if we did not achieve anything, we did not shut down the courts. I did not drag the legislature to Government House to pass budgets.” He took a swipe at the National Assembly for confirming Amaechi as a minister, despite his alleged atrocious attack against the judiciary as governor of Rivers State.

“You made a whole state not to have access to justice and nobody is saying anything. It is only in this country where I see parliament screen somebody to be a minister that shut the gate of justice.

“We came, opened the court. Who was the first person that rushed to court when the court was opened? The same man, who closed the court, the man who denied other people liberty,” he said.

He observed that Amaechi often bragged about building modern secondary schools while in office. According to him, a report of the state economic advisory council set up by Amaechi had denounced siting of these schools in locations far from communities.

The governor noted that any government that provides the people infrastructure, but denies them liberty and access to justice could best be described as a failed government.