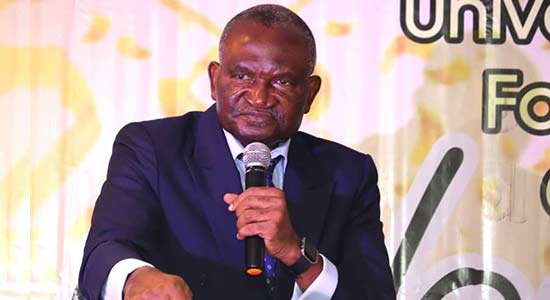 My Lord, Justice Ngwuta, you stand now before Him who is able to see the human spirit in all its nakedness and with whom titles are of no account. Even then, I must still address you as ‘My Lord’. It is a title that the Lord gave you. Death has not taken it away from you. And so ‘My Lord’ you are and ‘My Lord’ you will always be.

Sylvester, in life we were friends. In death we are still friends. And so, I speak as such at your funeral. Had the Lord called me before He called you, it is you who would have spoken at my funeral. As it is I am compelled to speak at yours. Fortunately, the words of commendation which I speak at your funeral are words of commendation which I spoke to you and about you several times before you died. You were, therefore, in the remarkable position of hearing your own funeral oration delivered to you before you died. Now that you are gone, I deliver it as your witness, testifying before men that you were a good man. This oration is my prayer to the Lord for the salvation of your soul.
Of Moses, it was said that when he died, the Lord himself buried him in the land of Moab:
“So, Moses the servant of the Lord died there in the land of Moab, according to the word of the Lord. And he buried him in a valley in the land of Moab, over against Bethpeor but no man knoweth of his sepulchre unto this day.”

There can be no greater privilege than that a man who has died be buried by the Lord himself. The nearest that we come to that is when a man dies and he is buried by the state. That is what has happened to the Hon. Justice Nwali Sylvester Ngwuta. It is to the Governor of this state, His Excellency, Engr. (Chief) David Nweze Umahi that the credit goes for this great honour done to our late brother. Governor Umahi, may the Lord bless your generous spirit. By this action you have kindled in the people of this state a fire of self-pride. And you have demonstrated that you will stand by your people in their hour of need. The Lord says that if we profess him to a hundred he will profess us to a thousand and if we profess him to a thousand he will profess us to ten thousand. By this singular action, Governor Umahi, you have professed the Lord to many. He will profess you to many more.

As for you, Justice Ngwuta, you were a man of rank and position. Having risen to the highest position in the judiciary, no purpose is served by dwelling upon the lesser offices you held in life. You rose from humble beginnings. You overcame every obstacle that life placed in your way in order to become the man that we honour today. Who can take away the fact that you are the first indigene of this state to rise to the Supreme Court Bench.

The heights that you attained is a lesson to us that we ought not to suffer any inhibitions whatsoever on account of the limited circumstances of our birth or upbringing. You laboured from the beginning to the end. You were a steadfast and humble man. You were grateful to the nation that gave you your education; the nation that protected you when you were defenseless; the nation that appointed you a judge of the High Court and Justice of the Court of Appeal and finally Justice of the Supreme Court. After your ordeals at the Code of Conduct Tribunal and the Federal High Court, that same nation repented her onslaughts on you and allowed you to resume your seat on the Supreme Court bench. Your feelings towards the nation were only feelings of gratitude. Your life is an example to us that whatever the onslaughts on us, we should not yield ground or be driven to condemn our fatherland. It is credited to Marcus Tullus Cicero that:

“… people are under an obligation to pass over in silence the wrongs they have suffered from their parents, and indeed even to endure these wrongs with resignation.”

That is what you did, Sylvester. You went the extra mile. You turned the other cheek. You added you coat when your cloak was taken. You prayed for them who hated and despitefully used you. In your lifetime you were a slave, but it was the Lord that you served. You served quietly and patiently so that your right hand did not know what your left hand was doing. In all your endeavors you did not strive to be understood by man. It was enough for you that He whom you served understood you. You lived by your hopes. In a nation proliferating with violence and terror, you did not live by your fears. By so doing, you were an example to us all. You set for us a never to be forgotten example of patience and humility.

Justice Ngwuta goes to render account of his stewardship, our prayers go with him. May the Lord have mercy on him. The Lord who knew him before He created him. The Lord who knew that he would stumble. Yet in mercy He created him. It is understandable that he fell several times under the several crosses that he had to bear. He stands now to be judged by that Man of Sorrows And Acquainted With Grief who understands what it means to fall under a cross, to be maligned and to suffer injustice. He was led to the slaughter and uttered only words of forgiveness. Seven times he spoke seven words of love.

‘Father, forgive them for they know not what they do.’

He will forgive you, Sylvester, for you knew not what you did. He will go the extra mile with you. He will cleanse you of all unrighteousness and give you a mansion in his Father’s house. You are the prodigal son come back to your Father’s house. He will put upon you a new robe of righteousness.

Justice Ngwuta would never have laboured and sacrificed as much as he did but for the hope that he entertained that the honours we lavished upon him in his lifetime will extend beyond the grave. That so many men and women of rank have come together to mourn him is proof that by his labours and sacrifices were not in vain. He would never have taken the pains he took over the several judgments he delivered had he believed that those judgments will perish with him. He served with honour and distinction and so generations to come will remember him and honour him. It is men and women like him that the nation shall remember.

“Behold, here I am: witness against me before the LORD, and before his anointed: whose ox have I taken? Or whose ass have I taken? Or whom have I defrauded? Whom have I oppressed? Or of whose hand have I received any bribe to blind mine eyes therewith? And I will restore it you. (1 Samuel 123)“

Even then, fear not, Sylvester. You stand before him who is mighty to save – the Lord of Mercy and Compassion. He knew you before He created you. He will not forsake you now. In mercy He created you and saw that you were good. It was by His grace that you came so far. He was with you in the valley of the shadow of death. And when you were cast into the valley of humiliation, He never forsook you. It was in Him that you lived and moved and had your being. He knew of your wanderings in this wilderness. It was He who preserved your soul. He bore all the weight that you laid upon Him. He was with you wherever providence led you. He supported you in every trouble. He never left you unsatisfied. In the beginning He was sufficient. In the end he will be sufficient. It was He who renewed your strength. When you passed through the rivers your passage was supported by His divine presence. When you walked through the fire you walked through unharmed. He satisfied your mouth with good things and made you to lie down in green pastures. In mercy He called you back. We give Him thanks.

As you depart all our courts will remain open and work will go on as if nothing happened. We are like soldiers who step over their dead and dying and go on fighting as long as the war is on. The war is still on. We shall go on fighting. As lawyers and judges we are enjoined to share in the sorrows and anxieties of society. It is we who console the bereaved. And so, we ought to know how to console ourselves at a time like this. We mourn you as learned men and women. We mourn as those who have hope.

Justice Ngwuta goes to take his rest at God’s appointed time. He did not live one day more or less than the Lord appointed. Some think that his departure was sudden and that it was hastened by all the pressures on him from the humiliations that he suffered. We never go before the Lord’s time. We cannot extend our days beyond those appointed by the Lord. God is never before His time and He is never behind. There was nothing that a Judge could wish to attain that Justice Ngwuta did not attain. There was little or nothing for him to gain by the addition of a few more years. And so the Lord called him when He did.

My dear Sylvester, whatever fears may have attended you in life, now you know that it is blessed to die. No more shall you labour to bend your knees. They shall bend of their own accord before the one before whom all knees must bend. Intercede now for us. While you were in our midst, you were witness to our sicknesses, our poverty, our cruelty and our wickedness. Intercede now for us. Find a voice for the suffering in our midst.

We pray for the repose of the soul of our friend, Nwali Sylvester Ngwuta. Overcome by the dust from which he was made he has now returned to it. May the Lord redeem him who sojourned the earth as a stranger. Grant, O Lord, that his soul may not wither nor wander but stand radiant in the congregation of the saints. Remember, Lord, that he was but flesh, a wind that passeth away, and cometh not again.

Lord, we do not ask that your son, Nwali Sylvester Ngwuta should come back and live in our midst.. We ask only that You may grant him a place in the Eternal Mansions of Heaven. At this time when we are overwhelmed by sorrow and driven to question even your own judgment, sanctify our thoughts and our words, strengthen our hearts and our hands and grant us submission to thy will. Unite the family he left behind and grant them peace. Amen.