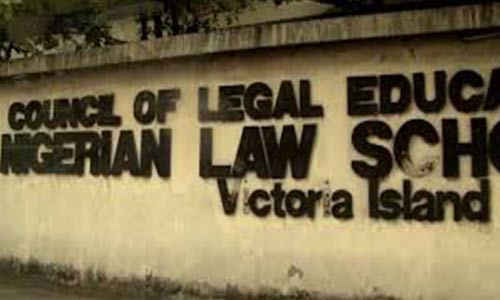 Indications emerged Tuesday afternoon that the first batch of the 2022 Call to Bar ceremony of graduates of the Nigeria Law School, would no longer hold as scheduled at the headquarters of the institution in Bwari, Abuja.

A Senior Advocate of Nigeria, who gave the hint said the swearing-in of the new Lawyers, would take place at the headquarters of the Body of Benchers (BoB) in Jabi, along the airport road.

The senior lawyer who craved anonymity cited the worrisome insecurity in the country.

He was responding to journalists’ questions on issues discussed at the July meeting of the body, which was held at the headquarters of the BoB, in Abuja.

Journalists: Sir, we want to know what was discussed during the meeting and whether the request of the NBA for the Chairman of the BoB, Chief Wole Olanipekun, SAN to step down as chairman was also discussed?

SAN: No, nothing like that was discussed, this meeting was fixed three months ago and what was discussed was solely the Call to Bar ceremony which will be held here because of the security situation in the country.

Our next meeting will be in September and nothing regarding the NBA was even mentioned for that meeting.

Recall that reports of planned attack on public institutions by terrorists have been in the media for some time now forcing the Ministry of Education to order the immediate closure of some secondary schools in the Federal Capital Territory (FCT).

Another report also has it that while a convoy of Brigade of Guard was attacked by terrorists along Bwari-Kubwa highway, the terrorists have besieged the Nigerian Law School in Bwari, possibly planning an attack.

The terrorists were also said to have vowed to kidnap the president and a governor in their protest against the administration.

Kidnapping for ransom of recent have become a booming business for terrorists and kidnappers as they appear to operate unhindered and unchallenged by security operatives.

Similarly, a staff of the law school confirmed the shift from Bwari to BoB’s headquarters in a telephone call but insisted he must get clearance before giving information to journalists.

Also, a staff in the office of the Secretary of the BoB confirmed the holding of the ceremony at their office but stated that her boss, who is the appropriate person to speak on the issue, was currently in an emergency meeting and cannot attend to our inquiry.

Meanwhile, the President of the Nigerian Bar Association (NBA), Mr  Olumide Akpata, it was learnt did not attend Tuesday’s meeting of the BOB.

Although no reason was said to have been given, Akpata had a few days ago written to the Chairman of BoB to recuse himself from presiding over the affairs of the body pending the hearing of a petition against a lawyer in his chambers.

The lawyer, Ms Adekunbi Ogunde, was alleged to have dropped the name of Olanipekun in an attempt to get a brief from an oil firm.

Akpata had in his letter to Olanipekun urged him to step aside in the interest of justice, considering the fact that the Legal Practitioners Disciplinary Committee (LPDC) responsible for disciplining erring lawyers is under the BoB which is currently being presided over by Olanipekun.

However, key stakeholders in the legal profession who attended the meeting include; Acting Chief Justice of Nigeria (CJN), Justice Kayode Ariwoola, past CJNs – Justice Mahmud Mohammed and Justice Walter Onnoghen.

Others are; Justice Mary Odili (Rtd), who doubles as the Vice-Chairman of the Body of Benchers, past Presidents of the NBA, Paul Usoro (SAN), O. C. J. Okocha (SAN), J.B. Daudu (SAN), Okey Wali (SAN), A.B Mahmud (SAN), amongst several others leaders of the legal profession, some of whom participated virtually.

Akpata, who, by virtue of his office, is a member of the BOB, failed to attend Tuesday’s meeting, the first since he requested the BOB Chairman, Chief Wole Olanipekun (SAN) to step down over a petition against a lawyer in Olanipekun’s firm.