The Unpopular Move to Unseat Ekweremadu – By EJIKEME EKPETE 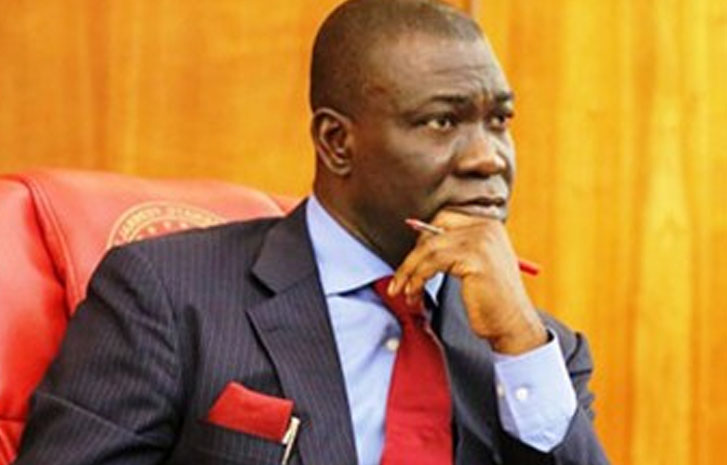 In Suit No. FHC/EN/CS/7/2022, Onyema also seeks an order of the court “commanding and mandating” the National Chairman of the PDP, Dr. Iyorchia Ayu, and PDP to “select, nominate, and forward” his name to the National Assembly “as a replacement” for Senator Ekweremadu.

He equally seeks another order of court “commanding and mandating the Chairman of the Independent National Electoral Commission (INEC), Prof. Mahmood Yakubu and INEC to withdraw or revoke, as the case may be, the Certificate of Return earlier issued to Ekweremadu and issue a fresh Certificate of Return to him as “the only available runner up” that can validly replace the embattled lawmaker.

Among others, he wants the court to decide: “Whether it is the intendment and contemplation of the Constitution of the Federal Republic of Nigeria (1999) as amended in 2018; the Senate Standing Orders 2015 as amended; and the Senate Legislative Calendar 2022, that the seat of Enugu West Senatorial District in the 9th Senate will be declared vacant by default, if the Senator representing, without just cause absents from sittings of the Senate for a period amounting in the aggregate to more than one-thirds of the total number of days during which the Senate meets in any one year, which is one-thirds of 181.

“Whether by virtue of the continuous absence of the 3rd defendant (Ekweremadu) from the Senate since 22nd day of June 2022 or days prior (when he last attended the sitting of the Senate), up till the date of adaptation of this Summons, or any other date thereafter, it could be said that the 3rd defendant is still validly representing the plaintiff (Chief Onyema) and Enugu West Senatorial District, as provided by the Constitution of the Federal Republic of Nigeria, and the Senate Standing Order 2015 as amended, in Nigeria Senate.

“Whether by virtue of the 3rd defendant’s travails, which was not caused by the plaintiff or any of his constituents, and going by the provisions of the Constitution of the Federal Republic of Nigeria (1999) as amended, the Senate Standing Order 2015 as amended, it is wise and best, for the 3rd defendant to honourably agree that he has defaulted in representation, withdraw from his position, and mandating the 1st and 2nd defendants (the President of the Senate and the Senate) to declare his position vacant by default, and instantly communicate same to 4th, 5th, 6th, 7th, and 8th defendants (Clark to the National Assembly, Dr. Ayu, PDP, Prof. Yakubu, and INEC) for appropriate and timeous actions, of his replacement with the plaintiff, by the 5th and 6th defendants and Certificate of Return to be issued to the Plaintiff by the 7th and 8th defendants”.

To advance his case, Onyema lied on oath that the 1st runner-up, Mr. Isaac Okah, is dead. But Okah, a retired Director in the Federal Civil Service, has come out to state that he is “alive”, “well”, and running his private business.

Okah has dissociated himself from a lawsuit, he described as “wicked” and having “no bearing whatsoever with Nigerian laws, conventions and practices of the National Assembly of Nigeria, and our humanity and culture as Ndigbo”.

He said “it is a shame that naked and unbridled ambition has pushed O.A.U Onyema into the sacrilege of wishing his fellow man dead”.

On the points of law, it baffles that O.A.U Onyema, a lawyer of over 25 years and a perennial senatorial aspirant, is ignorant of the provisions of the 1999 Constitution (as amended) and the Electoral Act 2022 on the matter.

Among others, Section 68 (1) of the 1999 Constitution (as amended) provides: “A member of the Senate or of the House of Representatives shall vacate his seat in the House of which he is a member if: (a) he becomes a member of another legislative house; (b) any other circumstances arise that, if he were not a member of the Senate or the House of Representatives, would cause him to be disqualified for election as a member; (c) he ceases to be a citizen of Nigeria; (d) he becomes President, Vice-President, Governor, Deputy Governor or a Minister of the Government of the Federation or a Commissioner of the Government of a State or a Special Adviser; (e) save as otherwise prescribed by this Constitution, he becomes a member of a commission or other body established by this Constitution or by any other law; (f) without just cause he is absent from meetings of the House of which he is a member for a period amounting in the aggregate to more than one-third of the total number of days during which the House meets in any one year; (g) being a person whose election to the House was sponsored by a political party, he becomes a member of another political party before the expiration of the period for which that House was elected: Provided that his membership of the latter political party is not as a result of a division in the political party of which he was previously a member or of a merger of two or more political parties or factions by one of which he was previously sponsored; or (h) the President of the Senate or, as the case may be, the Speaker of the House of Representatives receives a certificate under the hand of the Chairman of the Independent National Electoral Commission stating that the provisions of section 69 of this Constitution have been complied within respect of the recall of that member”.

However, Section 68 (3) clarifies that “A member of the Senate or of the House of Representatives shall be deemed to be absent without just cause from a meeting of the House of which he is a member, unless the person presiding certifies in writing that he is satisfied that the absence of the member from the meeting was for a just cause”.

Evidently, none of the above conditions has applied to Ekweremadu yet. Not only that a reasonable mind cannot claim that he has been absent for no just cause, Ekweremadu has also not been absent for one-thirds of the total number of sitting of the Senate in 2022 since 365 days make a year and the Senate sits for only three days in a week. Ekweremadu was arrested in the UK around 22nd June, but the Senate proceeded on recess in July and only resumed plenary on 20th September. Consequently, he can’t possibly be absent from plenary for one-thirds of 2022 before the end of the year, as the upper chamber would only sit for a maximum of 42 days. And when Christmas recess is subtracted, it would not be up to that.

Likewise, when the New Year and 2023 election breaks are subtracted from what would remain of the tenure of the 9th National Assembly between January and around May 2023, Ekweremadu would still not have violated Section 68 of the 1999 Constitution 2023.

Furthermore, should a vacancy occur, Section 76 of the 1999 Constitution (As Amended) unambiguously states that INEC shall conduct an election within 30 days to fill it.

In other words, Ekweremadu’s seat cannot even be inherited by Okah, who secured 84 votes to place second behind Ekweremadu, who polled 690 in the October 2018 senatorial primary, let alone O.A.U Onyema, who scored a miserly 61 votes to place a distant third.

The Electoral Act is equally clear that a prospective occupier of an elective position must have participated in all the processes and Nigerians have wondered how he expects to be made Senator without going through the processes of election. But these are as far as law and legalities go.

But, there is even something equally as important – our humanity, fidelity to friendship and kinship, and who we are as Ndigbo and a people of deep cultural values.

It is likely that most people, who have read about the lawsuit, assumed that O.A.U Onyema is someone far-removed from Ekweremadu.

But on the contrary, he is until the unfortunate development in London, someone who regularly ate and drank with the ever-hospitable Ekweremadu (Ikeoha Ndigbo) at his dining table; and I’m speaking literally.

In “Things Fall Apart”, Ogbuefi Ezeudu, while informing Okonkwo that the Oracle has decreed that Ikemefuna (the sacrificial lamb Mbaino handed to Umuaro three years earlier) should be killed as an atonement for an Umuaro woman killed by Mbaino, he is quick to advice Okonkwo not to have a hand in Ikemefuna’s death, for the boy calls him “father”.

So, assuming, but without conceding that Ekweremadu has infringed Section 68 of the 1999 Constitution, must such lawsuit come from O.A.U Onyema?

Besides, has it been the convention of the National Assembly to declare vacant the seat of their members, except in the event of death? Has any member been ever successfully recalled even?

It’s heart-wrenching that whereas Akaeze community in Ebonyi State called off their new yam festival in solidarity with Ekweremadu for the kinship they share with Mpu and for the good roads he attracted to Akaeze and surrounding Ebonyi communities, O.A.U Onyema, who should be preoccupied with his kinsman’s vindication, freedom and Sonia Ekweremadu’s survival is more interested in profiting from his misfortunes.

Unfortunately for Onyema, the suit is legally incompetent and dead on arrival.

Therefore, while God, our ancestors, and history to whom Okah committed Onyema’s sacrilegious death wish to him do their best, one hopes that the Inspector-General of Police and the Nigeria Bar Association take note of Onyema’s shameful perjury in pursuit of his unholy ambition and do the needful.

Ekpete is an Enugu-based lawyer