The Judiciary And 2023 General Elections By Raymond Nkannebe 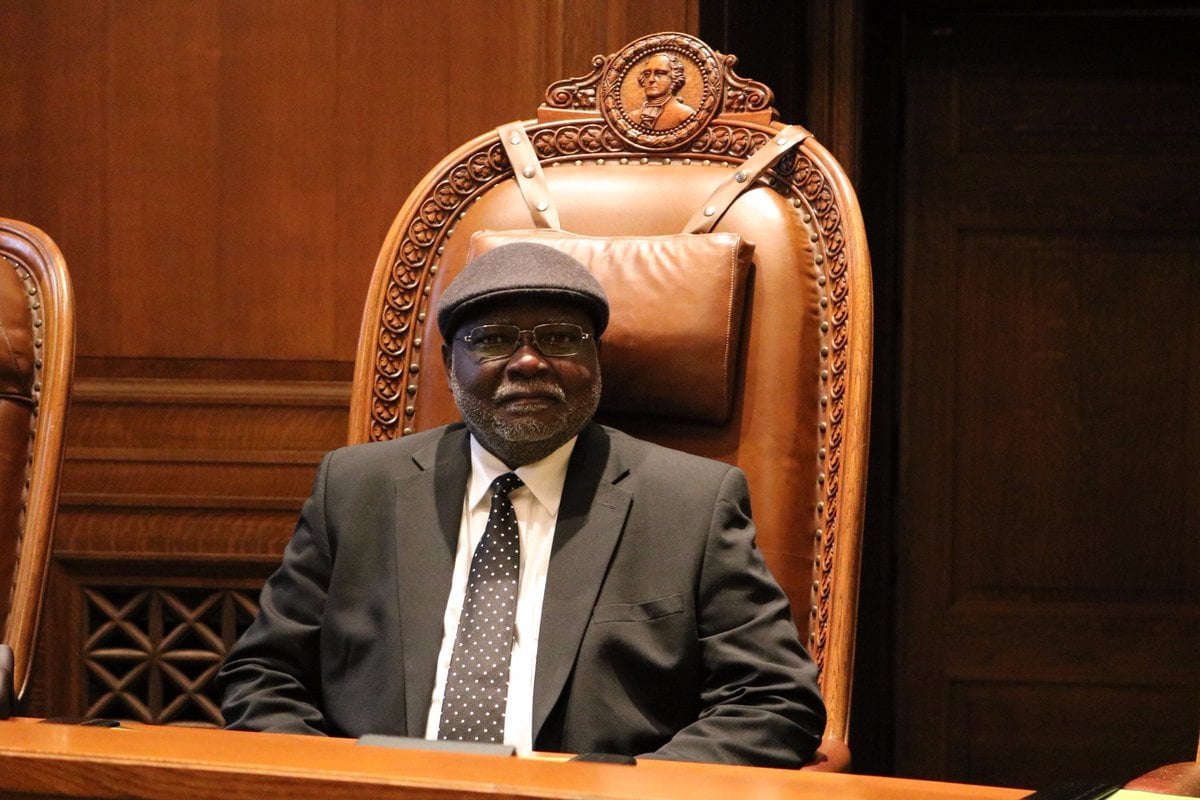 This article by Raymond Nkannebe discusses the issue of post-election litigation in the Nigerian electoral process, which has become just as important as our elections themselves, pointing out the fact that even though election litigation is not exclusive to Nigeria, in other countries while it seems to consolidate and strengthen their democracies, it has not particularly improved our own democracy

One of the unintended consequences of the zero-sum nature of Nigeria’s politics and the historical electoral heist that has characterised electioneering in Nigeria, is the foray of the Judiciary into the murky waters of politics. But, perhaps, it is meet to point out here that this phenomenon is not peculiar to Nigeria.

As democracy and society continues to evolve, the Judiciary has had increasing intervention in the political arena. There is perhaps, no better illustration of this, than the manner in which the last general election in the United States of America was litigated owing to the notion held by former President, Donald Trump, that the election that sacked him from power was stolen by the Democrats. Recent elections in Kenya, Ghana and elsewhere, have also been staunchly litigated by the losing parties. The only difference however, relative to the Nigerian situation, is in the rather expeditious and complimentary manner these cases have been conducted, resulting in the consolidation and strengthening of the democracies of the respective States.

The situation back home however, does not leave a similar taste in the mouth. The general impression of many Nigerians, is that the Judiciary has failed on several occasions, to deploy its very enormous powers in a manner the serves to consolidate Nigeria’s democracy. A ruling of the Supreme Court of Nigeria, three years ago, which returned a candidate that came fourth at the ballot as the duly elected Governor of a State in the South East against all rules of arithmetic and disregard of the electoral formula, has often been referenced as a key exhibit in in this regard.

What does the 2023 Election Mean for the Judiciary?

Incidentally, the Nigerian political clock has had its full orbit, and we are again on the cusp of another general election. The question is, what does this mean for the Judiciary?

In the interval between the last general election and the imminent 2023 polls, the Electoral Act – a major legislation at the heart of Nigeria’s electoral jurisprudence has been amended with some radical innovations, some of which have not received juridical introspection.

Whereas, it was thought that the amendment to the Act would reduce the incidence of political cases, given the level of transparency and accountability-structures introduced in the pre and post electoral processes; the experience from the concluded primary elections across the 18 political parties registered by the electoral body – INEC suggests otherwise. While the electoral framework has been commendably amended, our political actors remain stuck in their bad behaviour of compromising laid down rules and guidelines. For this reason, an already over-worked Judiciary has had to be called into the fray, at the cost of other matters bordering on the economic livelihoods of individuals and businesses whose cases would have to wait until these political cases are determined to finality.

Last September, the Chief Judge of the Federal High Court – the sole court with exclusive jurisdiction over pre-election matters as per the 2022 amendment to the Electoral Act, had to set up a special Panel of Judges to attend to cases emanating from the primary elections of political parties. These cases have kept a good many officers of that Court thoroughly engaged, and considering that almost all of these cases find their way to the Apex Court, our appellate Judges have not been spared the onslaught. But, that is not all.

As Nigerians prepare to go to the polls, the Judiciary is also gearing up to attend to the cases that would most likely emanate from the elections. As has become our misfortune in Nigeria, preparing for election also means preparing for election petitions. Thus, one of the first official acts of the newly sworn Chief Justice of Nigeria – the Hon. Mr. Justice Olukayode Ariwoola GCON, was the constitution and swearing-in of over 300 Judges that would be serving on different panels of election petition tribunals to adjudicate over disputes expected to arise from the February and March 2023 elections.

In his remarks at the engagement, the CJN seized the opportunity to admonish the judicial officers, on the need to undertake the assignment with great sense of responsibility and fidelity to their judicial oath of neutrality and fairness. “I will not condone any act of recklessness, abuse of power and public trust”, he warned.

Perhaps, in recognition of the critical role Court Registrars and Secretariats of Election Petition Tribunals play in the justice-delivery value chain, the workshop organised recently by the President of the Court of Appeal (PCA), Hon. Justice Monica Dongban-Mensem for Court Registrars who will be serving at the various election petition tribunals, is very instructive. During the event, the Head of the nation’s penultimate court, warned the Registrars not to see the task as an “opportunity to make money to enrich yourselves”, as “the court will not hesitate to deal with anyone found wanting in this regard”.

The separate admonitions of the CJN and PCA respectively, to the judicial and non-judicial staff of the election petition tribunals, is not totally without context. Indeed, they were being made against the backdrop of an ugly history, which has altogether served to undermine the perception of the Nigerian Judiciary.

Election petition tribunals are seen as a cash cow of sorts; an opportunity for quick money by all the major players involved in it: the Lawyers, the Judges and the Court Registrars. As one who has had the privilege of being actively involved in some of the most contentious electoral contests in our recent history, I should know.

This periodic bazaar of sorts has also left in its wake a long list of victims, especially amongst Lawyers and Judges who have been caught pants down, perverting the course of justice. On one occasion, a Judge of an election petition tribunal was alleged to have been engaged in intimate telephone exchanges over the case he was handling with a Senior Advocate of Nigeria (SAN), representing one of the parties in whose favour the tribunal eventually decided. These allegations eventually ended up before the National Judicial Council (NJC), in a petition against the Judge. At the end of investigations, the NJC found that he had violated his judicial oath in his dalliance with the SAN, and terminated his judicial career.

Separately, the Legal Practitioners Disciplinary Committee (LPDC) took up a complaint against the SAN for violation of the Rules of Professional Conduct (RPC) in the legal profession. On 21 May, 2015, the LPDC found him guilty of multiple violations of the RPC and disbarred him. He would later regain his Silk after an appeal at the Supreme Court, which quashed the findings of the LPDC on a rather technical ground, as the Court has become accustomed. The above instance, is one, out of many other cases.

It is thus, within the above context, that the separate admonitions of the top two courts in the land should be situated. After the experience of 2019, where certain decisions that emanated from the Judiciary over election cases in some respects undermined the concept of democracy itself, by foisting unpopular candidates on some electorates, the Judiciary this time must seize this fresh opportunity as a course-correcting exercise.

To be able to do so, it must approach the cases that would come before it from a legal cum moral prism that shuts every door of technicalities, in order to render judgements that are not only sound in law, but also in tune with the popular sentiment of the electorates. Election petitions, it is said, are sui generis: however, it would appear that the application of this principle has only taken a stultifying construct that only suffices in the adoption of arcane rules of technicalities that deliver justice ‘without a human face’, as Justice Chukwudifu Oputa JSC (of blessed memory) might have put it. To this end, an expansionist application of the new innovations in the Amended Electoral Act, some of which will fall for judicial interpretation for the first time, should be considered.

In an election year that has witnessed an unprecedented surge in civic interest and participation especially from the Nigerian Youth, the Judiciary must put its best foot forward, if it must live up to its cherished banner as the last hope of the common man.

In all, it is submitted that the outlook for the Judiciary in 2023 is a tricky one. To be sure, there have been moments in our history when the Judiciary distinguished itself as a bastion of our democracy and cherished rule of law principles. Opinions are however, bound to be divided, as to whether the recent outlook of that institution inspires similar hope at this time. Whatever side of the divide one might identify with, what is however, clear, is that we might have just come to one of such critical junctures in our history again, and the enormous role of the Judiciary in shaping it, should not be lost on it.