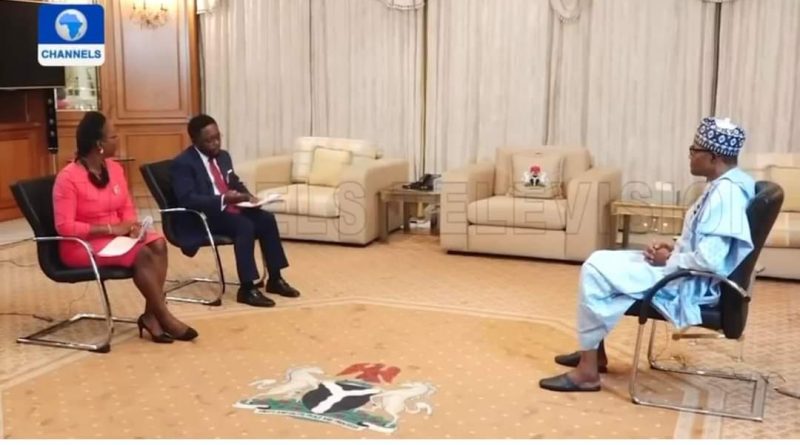 That Buhari’s Interview! By Levi Obijiofor

President Muhammadu Buhari’s interview with Channels Television last week was quite extraordinary and explosive in terms of the insights he provided and how he responded to interviewers’ questions. Some of his answers have already created deep divisions within the country and generated controversies also. There were answers that astonished some people. In my view, the number one amazing remark was Buhari’s clarification that he would not intervene to release Nnamdi Kanu, leader of the Indigenous People of Biafra (IPOB), who is currently on trial.

The finality of Buhari’s tone in his response to the question about Kanu, coupled with the expression on Buhari’s face, baffled many people who watched the interview on television. This was a major surprise given that a group of Igbo leaders had visited Buhari in November last year. It was during that visit that the leaders presented Buhari with a request that the government should consider releasing Kanu in order to ease tension and disruptions to social life in the South-East region.

Following that historic visit that was led by statesman Mbazulike Amaechi, expectations were high that Buhari might, just might, grant the ageing Igbo leader his wish. Buhari has now poured cold water on public expectations that he might grant Amaechi his major wish by releasing Kanu.

Buhari cited the principle of separation of powers and the independence of the judiciary as his main reason for not appealing to the trial judge to release Kanu. On that basis, it appeared as though Buhari’s reason for declining the appeal made by Igbo leaders was based on the principle of non-interference.

In the television interview, Buhari argued extensively as follows: “There is one institution that I wouldn’t interfere with, that is the judiciary. Kanu’s case is with the judiciary but what I wonder is, when Kanu was safely in Europe, abusing this administration and mentioning too many things, I thought he wants to come and defend himself on the accusations…So, we are giving him an opportunity to defend himself in our system, not to be abusing us from Europe as if he was not a Nigerian. Let him come here with us and then criticise us here. Nigerians know that I don’t interfere with the judiciary, let him be listened to. But those who are saying that he should be released, no, we cannot release him.”

No sooner did Buhari make his position on Kanu clear than questions began to pop up in the public domain. Could it be that Igbo leaders who tabled their request to Buhari did not realise that Buhari might use the independence of the judiciary as a good ground to knock back their request? Did the delegation consider all possible options before travelling to Aso Rock to present their main request?

Just as the visit to Buhari by Igbo leaders took everyone by surprise last November, Buhari’s announcement of his decision on television also contained some elements of surprise. A request was made in a private forum. And the request was rejected but conveyed to the public (not Igbo leaders) on television. Igbo leaders might learn some hard lessons from this experience.

Other than his wish to respect the independence of the judiciary, what were other reasons given by Buhari for rejecting the appeal by Igbo leaders?

During the interview, Buhari said something that suggested immediately that the government was on a vengeance mission by subjecting Kanu to a prolonged period of trial. He said: “There is a possibility of political solution. If people behave themselves, all well and good but you can’t go to a foreign country and keep on sending incorrect economic and security problems against our country and thinking that you would not account for what you have been doing. Let him (Kanu) account for what he has been doing.”

Human rights activists would find Buhari’s reason to be uncomfortable, high-handed, unforgiving, unedifying, and the utterances far from being statesmanlike. They would argue that a President is supposed to act like a respected father figure who does not go after his children with a sledgehammer in order to extract a “pound of flesh” where a closed-door meeting or dialogue would have offered an opportunity to resolve any misunderstanding.

Human rights advocates would also remind Buhari that it is human to err, as long as the defence of one’s kith and kin, or the expression of one’s desire for autonomy should not be considered a punishable offence in a democracy. A democracy, we should be reminded, promotes free expression of views. This is why Article 19 of the United Nations Universal Declaration of Human Rights, as well as major democracies in Europe and North America argue that no one should suffer political persecution for expressing their views in the public sphere, as long as the views are not defamatory.

Certain things have emerged from Buhari’s interview on Channels Television. Buhari is as upset with Kanu and IPOB as Kanu is outraged by the unjust and excessively harsh way the government has treated people in the South-East, including the government’s marginalisation of the people. These facts are incontestable. There is a saying that two wrongs do not make a right. Buhari could have used the request by Igbo leaders to demonstrate that he has no hard feelings against people in the South-East, that he is President to all Nigerians (as he claimed during his inauguration in 2015), and that his government has been exploring ways to address serious issues that undermine socioeconomic development of the South-East.

The following points have been made previously and deserve to be reinforced here. Restlessness by youth in the South-East region cannot be solved through military force or confrontation or mass killings of people in the region. Effective and successful national leaders approach national problems through a mix of dialogue, communication, open consultation, and strategic policies. Marginalisation of the South-East will always generate distrust, suspicion, anger, violence, and an atmosphere of instability.

It has been said that the hallmark of maturity is the ability to remain calm in the face of all provocations. Buhari and his government need to apply this apothegm in the way they handle the volatile situation in the South-East. Military force will aggravate, rather than ease, the tension in the region.

As he approaches the conclusion of his second tenure, Buhari should aim to unify people from all ethnic groups, religious faiths, and geographic regions. Government programmes that create divisions among people or construct artificial boundaries within a country are unproductive and unhelpful. A country that claims to be united should demonstrate that it is truly unified in principle and in practice.