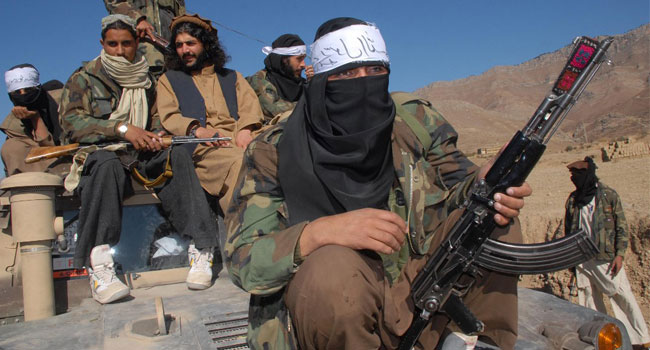 A small carpeted room serves as a makeshift jail for 12 “criminals” who are awaiting Taliban justice, caught in the legal system which the Islamists are building at the heart of their new Afghan regime.

None of the prisoners being held on the ground floor of the Taliban headquarters in Panjwai district in southern Afghanistan have yet seen the local judge, who is busy in another area.

Until he arrives, the Taliban fighters of the unit in Kandahar province — left to their own whims and understanding of the group’s interpretation of Islamic law — represent the entirety of the justice system.

“They will keep me here until I can pay back the person I owe money to,” said Haj Baran, a 41-year-old businessman arrested three days earlier for an outstanding debt.

“We have a good system of judgement with the Islamic law of the Taliban,” he told AFP, as a guard watched closely.

After a nearly 20-year insurgency, the Taliban took power in Afghanistan in August by force.

But they long ago placed their version of justice at the centre of their ideology, and have “made the courts a means of conquering power”, says Adam Bazco, a researcher who conducted a field investigation on the Taliban judicial system from 2010 to 2016.

From 2004 on, in areas the Taliban controlled, “people were turning to them because of growing discontent with the interference of Western groups in their land disputes and a judicial system that appeared increasingly corrupt and nepotistic”, Bazco says.

In the context of war, he explains, the severity of the Taliban punishments was welcomed by some.

They were known for their harshness — but also their impartiality, speed and predictability.

Three months after the Taliban seized power, however, they are still struggling to implement that system across the country.

At the nearby central prison in the city of Kandahar, the deputy director Mansour Maulavi brandishes a length of electric cable as a whip as he shows off the fetid barracks.

One wing houses 1,000 drug addicts going through forced withdrawal, he says. Now 200 “criminals” are also being held there.

“It is better for Islamic law to decide” who is a criminal, says Maulavi, who used to run the region’s clandestine Taliban prison. Under the previous ineffective and often corrupt system, “they didn’t know.”

Mohammad Naeem, sitting cross-legged in the prison yard, is among those awaiting judgement.

He was arrested two months ago while at home with his wife and a 14-year-old girl he said he wanted to marry.

“The girl agreed but the parents didn’t,” the 35-year-old says, explaining that the parents called the Taliban to complain of sexual assault.

“But I didn’t touch the girl, they can do tests and check,” Naeem says.

If he is found guilty of having sexual relations outside marriage he risks being condemned to death by stoning.

“I just want to be judged according to Islamic law, because I did nothing wrong,” he says.

In some cases since the takeover, the Taliban judges — wary of losing support — have tried to avoid being too harsh.

Bazco recalls an infamous case from the Taliban’s previous regime in the 1990s in which a wall was pushed onto a man convicted of sodomy, killing him.

Now, he says, such cases “do not represent the daily life under Taliban justice”.

Instead, Afghanistan’s masters say they are seeking international respectability.

“If someone takes it upon himself to kill a person, even if it is one of our men, it is a crime and we will bring him before the courts and he will have to face the law,” government spokesman Zabihullah Mujahid said after three guests were recently killed at a wedding by Taliban fighters over a dispute about music.

And yet, the new government has already resurrected some of the most feared instruments of deterrence from its first regime — such as the dreaded religious police, and the Ministry for the Promotion of Virtue and Suppression of Vice.

The Taliban also continue to carry out violent punishments.

In the western city of Herat on September 25, they hung the bodies of four men accused of kidnapping from cranes to “teach a lesson” to others, officials said.

The Taliban are walking a thin line between “their moral vision that can go to the worst extremes” and a “willingness to give pledges, to demonstrate a functioning bureaucracy and knowledge of norms, including on the issue of human rights”, Bazco says.

That they are discussing such things at all — even if there is still a huge gap between words and deeds — is “the biggest evolution of the movement” since their previous regime, he says.

Pul-e-Charkhi, Kabul’s largest prison, is mostly deserted since the Islamists released tens of thousands of criminals in the final hours of their battle to oust the US-backed government.

Now a Taliban official, Asadullah Shahnan, is preparing to reopen the facility.

Shahnan himself spent six years in Pul-e-Charkhi as a prisoner under the previous government, which continued to exercise the death penalty.

He remembers how, on execution days, prisoners were brought to the windows, forced to watch.