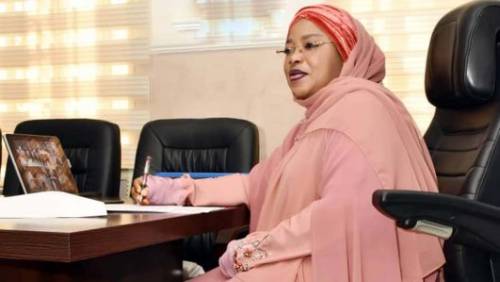 The National Coordinator, Nigeria Sex Workers’ Association, Amaka Enemo, has taken a swipe at the Minister of State for the Federal Capital Territory, Ramatu Aliyu, over the latter’s moves to get rid of commercial sex workers in the country’s capital.

Speaking with SaharaReporters, Enemo said sex workers were not criminals as she argued that the Nigerian constitution is not against sex work in the country.

According to her, it is not logical to criminalise a set of persons for consenting access to their bodies as business as she asserted that all women could be sex workers.

She said, “I don’t know about the arrest; our network covers organisations; we give health and human rights services to sex workers. In the constitution, sex work is not a criminal offence. I don’t know why someone will come out and say what is not in the law should automatically be in the law.

“Sex workers are not criminalised, they are human beings like every other person and every woman is a sex worker because if you have a husband and he buys something for you; you will always be happy.

“Let’s say; he buys you a car, the way you will ‘service’ him will be different from every other day. So, concentrating on a particular group because they chose to call it work is the problem we’re having. There are other important things that they (the government) should have been doing or they should have done but they are not doing it.

“Are sex workers criminals? It’s an agreement, consent from two adults, they negotiate and at the end of the day, both of them, consenting adults agree and you’re telling them you don’t want such, it doesn’t make sense.”

Recall that on October 29, the Minister of State for the Federal Capital Territory, Ramatu Aliyu, ordered the sanitisation of the FCT against all forms of human nuisances and social vices such as commercial street workers and brothels.

This, according to Malam Sani Amar, the Acting Director, Social Welfare Services, FCT Social Development Secretariat, is part of efforts to safeguard the health of residents in the territory.

Amar had led a team of security agencies and evacuation squad of SDS, to raid a brothel, on Friday in Abuja.

He said the FCT minister of state had directed the social development secretariat to sanitise the area thoroughly.

He said no fewer than 27 commercial sex workers had been arrested and handed over to the police for prosecution as he reiterated the commitment of FCTA to ensure that rule of law propel in the city.

He cited the Penal Code of Northern Nigeria, the Immigration Act and NAPTIP (National Agency for Prohibition of Trafficking in Persons) Act which stipulates that operation of a brothel, street commercial sex work, child abuse, child labour, human trafficking are criminal activities.

“The FCT Minister of State, Dr Ramatu Aliyu and the FCT Permanent Secretary, Mr Olusade Adesola and the acting Secretary Social Development Secretariat (SDS), Dr Kevin Ike, are committed to safeguarding the health and lives of the residents.

“The minister has declared war against operators of brothels in FCT and given us marching orders to ensure we rid the city of such illegal activities and business.

“This is a clear demonstration of the commitment of the minister of state to ensure that the rule of law propels in the FCT,” Amar had said.

He further appealed to the public, especially those engaged in the operation of brothels and commercial sex work to have a change of mind and business.

“COVID-19 pandemic is real and a commerce sex operator and their patronisers don’t have the luxury of time to check or ensure how healthy they are.

“Therefore, it is an avenue for easy spread of COVID-19 and it is the duty of the FCT Administration to safeguard the lives and health of residents,” he said.