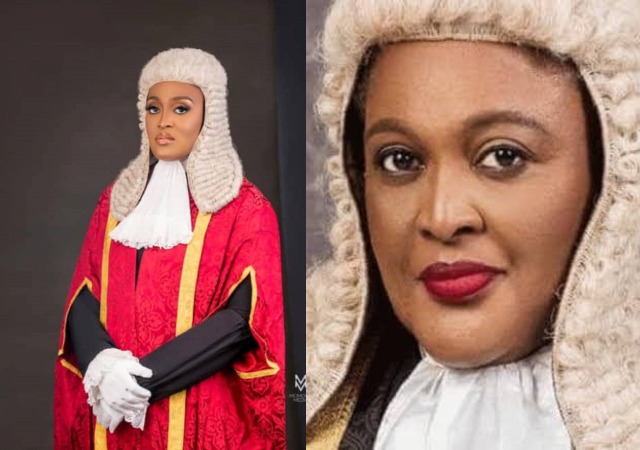 Four of the newly inaugurated judges Federal Capital Territory are children of serving and retired judges in the country while one other is the sibling of a serving judge.

The inauguration comes barely a year after protests erupted over the controversial list of nominees that was forwarded to the President, Major General Muhammadu Buhari (retd.), by the National Judicial Council for consideration.

A letter marked ‘confidential’ and signed by Buhari this month conveyed the President’s approval of the 22 judges.

Some of the newly inaugurated judges include Njideka Nwosu-Iheme, who is the daughter of Justice Mary Odili of the Supreme Court. Nwosu-Iheme was appointed into the FCT Judiciary in March 2015 and was until recently a Magistrate at the Wuse Zone 6 Magistrate court.

According to a petition dated May 6, 2020, which was signed by Silas Onu and Chidi Odinkalu, the conveners of the Open Bar Initiative, the relatives of at least eight judges were on the list.

Others inaugurated on Tuesday whose nominations had been challenged include; Fatima Abubakar Aliyu, the daughter of the immediate past President of the Court of Appeal, Justice Zainab Bulkachuwa; Mimi Katsina-Alu Apena, the daughter of late CJN, Aloysius Katsina-Alu, and Ibrahim Mohammed, the son of a former grand-khadi of the FCT.
Some others are: Nwabulu Chineze, said to be a sister to the presiding Justice of the Court of Appeal, Akure.

Speaking at the inauguration of the 22 judges, the CJN, Justice Tanko Muhammad called on the 22 new Judges to refrain from anything that would smear their name or bring them into disrepute.

The CJN gave the advice on Tuesday while swearing in the judges at the Supreme Court Complex in Abuja.

He said, “The bench is neither for the prosaic, the greedy nor those with questionable character who can easily fall for a plate of porridge offered by desperate litigants.”

The CJN charged them to rise above temptations and trials that might obstruct or even halt their rise to the pinnacle of their career.

According to him, the newly sworn-in judges have entered a lifetime covenant with God and the Federal Republic of Nigeria, adding that whatever they do right would be counted and accordingly recorded in their favour.

“Appointment to the bench is not an appointment to wealth, vainglory, dishonest disposition or ostentatious lifestyle through corrupt acquaintances”, he said, warning that the searchlight of the National Judicial Council had been beamed on all judicial officers in the country.

The CJN said, “Our radar is sophisticated enough to detect every form of corruption and wrongdoings. The remoteness of your location of adjudication can never blur our sight on you.”

While informing the judges that the NJC has a powerful lens to capture and document their conduct, Muhammad urged them to be careful in their conduct to avoid regretting being appointed a judicial officer.

The CJN said the letters and words of the oath they have taken must reside in a prime place of their heart and be applied generously in their adjudications.

Muhammad urged them to be impartial, fair to all and apply justice and equity in all their undertakings.