The event saw the consecration of two Monsignors, and the bestowment of the Papal Medal of Honour on four deserving faithfuls, including Senior Lawyer, Chief Sena Anthony. 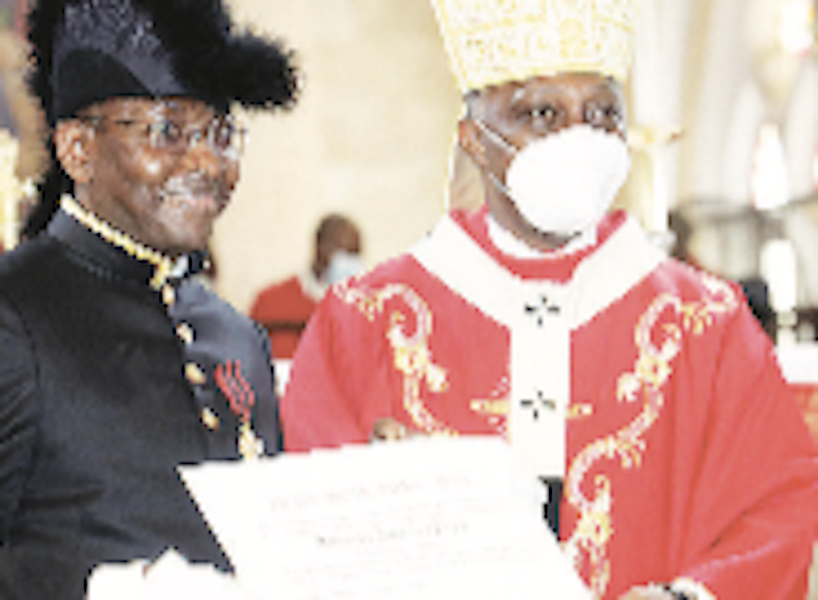 It was an honour well deserving when two Senior Advocates of Nigeria, Chief Tony Idigbe, SAN and Mr Toyin Pinheiro, SAN were conferred with the exalted ranks of Knights of St. Sylvester by the Pope, Francis.

On the significance of the Papal Knighthood, Sir Idigbe said ‘the award is quite significant for me, because this is an honour that you don’t ask for. I don’t know how the process works. All I know is that, I was given the award by the Pope. You don’t know how the process works. You don’t apply for it; however, I appreciate it a lot. I believe there is something I was doing in the Church which was appreciated, and I was considered worthy to be so honoured by the Pope. There are very few awards in the world, that you don’t have to apply for. This is one of them.

On the call by members of the Christian Lawyers Fellowship of Nigeria for the creating of Ecclesiastical Court, Idigbe had this to say ‘I don’t see what is wrong with that. It is important to narrow down the issues. First, is there anything conceptually wrong with the idea? If there is nothing wrong, I don’t see why we cant have Ecclesiastical Courts. The next issue is, what are the challenges, and like every other challenge, they can be surmounted. All that is required is more training to equip Lawyers who would practice in that area’.

For the Laity, Papal Knighthood is about the highest honour for anyone, but, for Sir Idigbe, ‘what I have done in the Church up to this time, was never because I was expecting any award. I wasn’t looking forward to this. It wasn’t a motivation. So, for me, I am a Senior Advocate of Nigeria. While some consider the SAN award as a retirement, I have been SAN for over 21 years and I am still in active practice, going to court, advising clients and so on’.

Would Sir Idigbe consider a political office, or a position of authority? He said he is not enthusiastic.

According to him, ‘Being over 60, I am not that young for any political office. However, I actually think there should be leadership in everything you do. I deprecate political office, but one can lead in so many other ways, to lead without taking up political office. It depends on the profession, and I chose the legal profession to serve and to lead. It is part of the reason I took the Harvard Certificate Course in Leadership. I also like my knowledge to touch the Church’.

The solemn ceremony which held at the Holy Cross Cathedral was presided over by the Archbishop of Lagos Archdiocese, His Lordship, Most Rev. Dr. Adewale Martins with other bishops in attendance.

The event saw the consecration of two Monsignors, and the bestowment of the Papal Medal of Honour on four deserving faithfuls, including Senior Lawyer, Chief Sena Anthony.