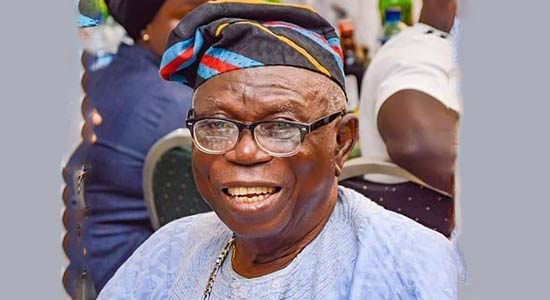 The Lagos State Governor, Babajide Sanwo-Olu, on Thursday, named newly completed 480 housing units of LagosHOMS at Ibeshe in Ikorodu after B.O. Benson who passed on at the age of 89 in 2020.

Mr Sanwo-Olu, while inaugurating the 480 homes delivered through direct budgetary allocation, echoed the virtues of the late patriarch while enumerating the impact of good and decent homes on the welfare of residents of Lagos State.

He said that decent shelter enhances the quality of life and promotes general wellbeing to generate ripple effects on other areas of life by adding meaning and essence to living .

The governor said decent housing was a priority for his administration, adding that the inauguration was in fulfilment of his electoral promises, describing the estate as a modern residential estate dedicated to the well-being of the good people of Lagos State.

He said his government had in the past two and half years adopted measures to bridge the huge housing deficit compounded by increased population due to influx of people to the state.

“In order to cope with this trend, the state government regards it as a duty to keep on building more homes to take care of the increasing housing needs of its residents.

“About five weeks ago, we commissioned an Estate of 100 homes constructed through joint venture in Lekki. Today, we are here again to release another set of 480 homes delivered through direct budgetary allocation.

“In utilizing these two strategies of partnership with the private sector and budgetary allocation, we have been able to deliver 13 major housing schemes all over the state.

“We are still counting because we are still at work in a number of housing construction sites all over the state.

“Apart from the one being commissioned today, three schemes are virtually ready and awaiting commissioning at Sangotedo, Odo-Onosa Ayandelu, and Agbowa,” he said.

Mr Sanwo-Olu assured that his administration would mark its third anniversary with 7,000 homes, adding that the state government was also embarking on partnership with private sector to meet more housing needs.

He said the private sector involvement in housing development was important for robust housing delivery policy while listing projects achieved through the partnerships.

The governor said the Phase 2 of the Ibeshe Housing scheme that its foundation for the construction was being laid will yield a total of 192 two-bedroom flats with good supporting infrastructure.

Mr Sanwo-Olu, who also performed the Ground Breaking Ceremony of LagosHOMS Ibeshe Phase 11, said that his administration had created 17,000 direct and 18,000 indirect jobs in the construction value chain.

The Commissioner for Housing, Moruf Akinderu-Fatai, described Mr Sanwo-Olu as an accomplished housing development award winner who was passionate about making shelter available to all classes in the state, through deliberate consistent policies to bridge the shelter gap.

“With more decent homes, the family ecosystem is better preserved, living standards are improved and the beauty of the environment is enhanced,” he said.

He reeled out the achievements of the governor and commitment of ministry officials while calling for support of residents of the state.

“It is important to note that this estate which is constructed through budgetary allocation is located close to the shoreline thereby making it a choice residential scheme,” he said.

Rasheed Makinde, chairman, House Committee on Housing, said the governor took over all moribund housing projects and completed them while giving assurances and support of the state Assembly.

NAN reports that the newly inaugurated estate located opposite Nichemtex factory, Ibeshe Road, Igbogbo – Baiyeku LCDA, sits on15 hectares and consists of 40 blocks of one, two, and three bedrooms apartments.