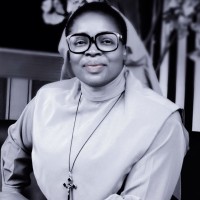 Rev. Sister Winifred Moneme who was among the 880 successful candidates that were recently called to Bar made history as the second Nigerian to have studied Canon Law.

Canon law is most simply the rules and ordinances governing the Christian community specifically the Catholic Church.

The Rev. Sister of the Congression of Sisters of Jesus the Saviour, Rivers State, combined both Civil and Canon law and studied both at the doctorate level.

Speaking with Daily Sun, an elated Moneme dismissed the perception that the legal profession lacks morality.

According to her, “it’s a wrong perception to say that religion and law are strange bedfellows. Religion is like a vocation while law is a profession.

” Like every other profession, there are good and bad people, so the issue of morality really is an individual thing. Besides, the rules of professional conduct for lawyers and ethics does not accommodate immoral conduct.”

Moneme said she is open to practice law in the areas of forensic, Medical and religion.

While advising parents to allow their children to choose their careers and not to force it on them, she called on the management of the Nigerian Law School to improve in the area of academic facilities especially the digital aspect of it.

Meanwhile, the Chairman of the Body of Benchers and retired Justice of the Supreme Court, Justice Olabode Rhodes-Vivour, had while speakingat the ceremony  advised the 880 law graduates not to stray from the ethics of the profession.

Rhodes-Vivour urged them to avoid acts or conducts that could obstruct or adversely affect the course of justice.

You must adhere strictly to the provisions of the rules of professional conduct and maintain best practices at all times,” he said. The eminent jurist spoke in Abuja at the Call to Bar ceremony held for the 880 who were successful in the December 2020 Bar final examinations of the Nigerian Law School (NLS).

He warned that the Legal Profession and Disciplinary Committee (LPDC) was ready to discipline erring lawyer, who engages in acts amounting to infamous conduct.

The Director-General of the NLS, Professor Isa Hayatu Chiroma (SAN) had while charging the new lawyers to adhere strictly to the norms and ethics of the profession, noted that 1,561 students sat for the December 2020 Bar final examinations, out of which 880 came out successful.

Culled from the Sun

NEWER POSTExtradition Of Abba Kyari To The US Not Automatic
OLDER POSTAlleged Rape: Benue Govt Closes Case Against Lecturer Over Death Of Ochanya