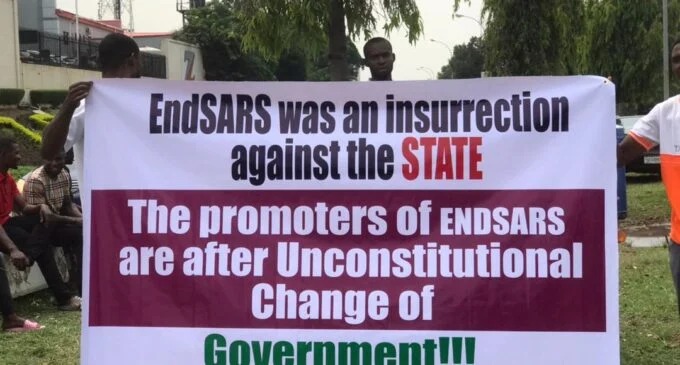 A group of pro-Buhari protesters converged on the Unity Fountain in Abuja, saying “nobody died at Lekki tollgate” in Lagos.

The protesters who were conveyed to the venue on a bus, held up placards stating,”#EndSarsProtest; Lekki shooting was a hoax”, and ”Nobody died at Lekki tollgate”.

Okpokwu Ogenyi, leader of the pro-government protesters, said the #EndSARS protesters were mobilised to blackmail the Buhari administration.

“We shall no longer keep quiet while unscrupulous elements are trying to blackmail the Buhari government,” he said.

Some of the protesters TheCable spoke to said they did not know why they were brought to the Unity Fountain.

When asked if she was paid to be there, she said, “it’s when we go that we will be paid”.

Also Joy, another protester, said one Miss Bello asked her to show up, adding “I don’t why I am here”.

While some reports, including civil society groups say some protesters were killed in the attack, the federal government has disputed this account.

Lai Mohammed, minister of information, on Wednesday described the Lekki incident as a ”phantom massacre”.

Nigerians poured into the streets in Lagos, Abuja and other places today to mark the first anniversary of the #EndSARS protest.