The House of Representatives has passed the Electoral Act Amendment Bill with the retention of the controversial section 52 of the bill. 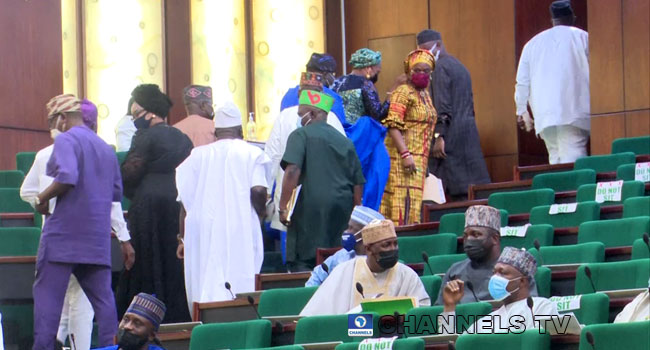 The House of Representatives has passed the Electoral Act Amendment Bill with the retention of the controversial section 52 of the bill.

Section 52 (3) as approved says, “The Commission may transmit results of elections by electronic means where and when practicable.”

The bill was passed in absence of the Peoples Democratic Party (PDP) members, who had earlier staged a walk-out.

The Minority Leader, Ndudi Elumelu, had led the PDP out of the chamber over the contentious section.

PREMIUM TIMES had reported the controversy that trailed the consideration of clause 52 on Thursday, which forced the House to adjourn after the stalemate.

After the consideration of other clauses in the bill, Mr Wase attempted to revert to plenary to report progress, but Mr Elumelu raised a point of order that section 52 should be decided.

In response, Mr Wase said clause 52 was considered on Thursday, hence, the decision can only be changed with a substantive motion for ‘rescission’.

In protest, the PDP lawmakers walked out, while the other lawmakers stayed behind to adopt the report. The bill was also passed for a third reading in absence of the opposition lawmakers.

We are disappointed in Wase – PDP

While briefing journalists, the PDP caucus, led by Mr Elumelu, said the caucus walked out because they cannot be part of “a fake process”.

“We cannot be part of that fake process where they’re depriving Nigerians of their right for their results to be counted accurately. Because e-transmission will guard against rigging and votes can count. But what they have done is to discountenance our agitations that let there be transparency in the next conduct of our elections,” he said.

The caucus also accused the leadership of the House of preventing Mahmood Yakubu, the Independent National Electoral Commission Chairman and Umar Danbatta, the Executive Vice Chairman of the Nigerian Communications Commission from briefing the House.

Mr Elumelu said the directors who represented NCC ”could not substantiate issues”.

“To our greatest surprise upon resumption this morning we found out that INEC was asked to stay back. We tried to inquire why, they told us that it is because they do not want us INEC to be seen to be biased and that was why they deprived INEC from coming in the NCC itself also, they asked the Executive Vice Chairman not to show up and thereby, he resorted to asking somebody in capacity of a director to show up.

“Even the director himself couldn’t even substantiate issues. The man, while he was making his submission, couldn’t be heard and I asked him, “You are under oath, is it that you could not be heard or are you always like this or stage fright but I was shouted down.”

The bill will still have to go through the conference committee of the National Assembly because the Senate and House have passed two different versions.