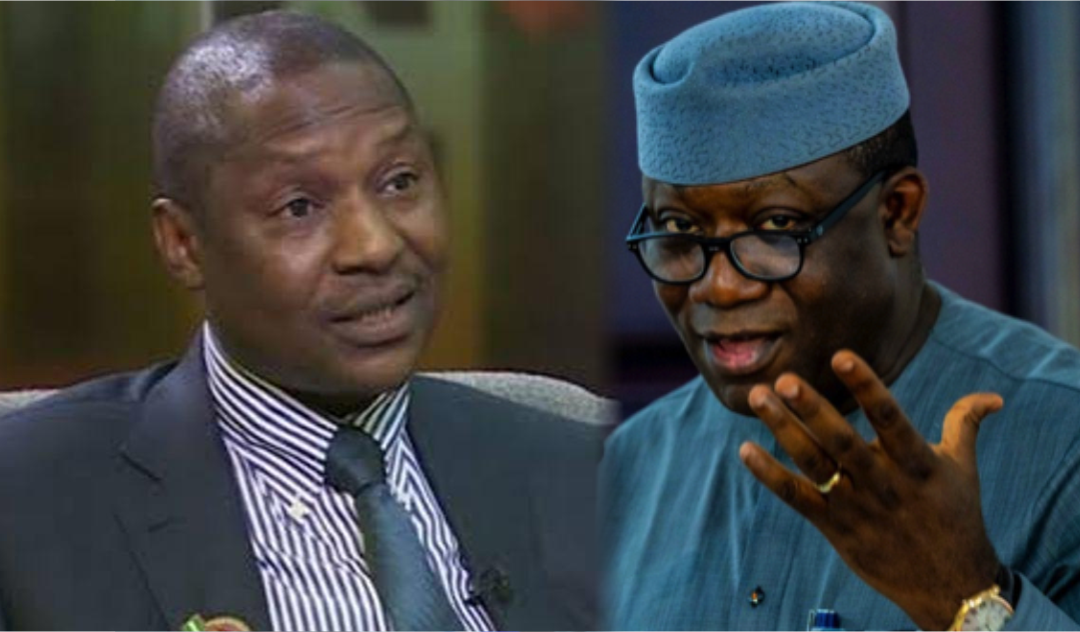 The Nigeria Governors’ Forum (NGF) yesterday maintained that the Attorney General of the Federation and Minister of Justice, Mr. Abubakar Malami has continued to mislead President Muhammadu Buhari in the case of the €354.33 million (N169 billion at official FX rate) Paris Fund deductions being claimed by some consultants.

Speaking on Arise News Channel, in response to comments made on the matter earlier by Malami, the NGF Chairman, Dr. Kayode Fayemi, wondered why the attorney general was taking sides with people he described as “dubious”, instead of defending the country against them.

The federal government had approved the payment of the controversial sum to six creditors, in defiance of the issues raised by the 36 state governors on the legitimacy of the demands by the claimants.

Also, Ted Iseghoghi is claiming €134781915.00, while a firm, Panic Alert Security System Limited, owned by George Uboh, is claiming €40546401.11 in separate “consent judgments”.
The Debt Management Office (DMO) was recently directed to commence issuance of promissory notes to the creditors, a development the governors have continued to resist.

Malami had insisted that the consultants were deserving of the monies, from his own assessment of the situation, alleging that the governors had admitted to owing the debts and had actually been paying them off for some years.
According to Malami, contrary to claims, the NGF had signed a contractual agreement authorising the deduction of fees from the federal allocation of the states as payments to consultants, who handled negotiations on behalf of the 36 States and FCT.

He had stated that having committed to the deduction of the fee from the federal allocation which the governors of the 36 states had signed to and which preceded the Buhari administration for which payments were made in the past, the federal government could not but follow through with the payment hence the recent approval to effect the payment to the consultants via promissory notes.

But speaking yesterday, Fayemi, who stated that he was ordinarily reluctant to discuss the matter since it was already in court, noted that the governors had held several consultations with Buhari, his chief of staff, the attorney general and the finance minister in the last eight months to sort out the contentious issues.

According to the Ekiti state governor, the consultants were taking advantage of Buhari’s “decency and generosity of spirit” to fleece the Nigerian people, having tried and failed during the administrations of Presidents Olusegun Obasanjo, Umar Yar’adua and Goodluck Jonathan to rip off the Nigerian people.

He argued that there was no order of mandamus against the governors anywhere as alluded to by the attorney general and challenged Malami to produce the document if he’s in possession of one.

The NGF chairman further pushed back on a statement made by Malami during the interview, that there exists a consent judgment confirming that the monies were owed the consultants and there was an agreement to pay, saying that there was nowhere in the so-called document that any amount was mentioned.

He mentioned that whatever consent judgment the consultants claimed to have obtained was entered into by a faction of the governors’ forum in the days when the then chair of the NGF, Rotimi Amaechi, was purportedly removed, maintaining that Amaechi’s NGF which was the authentic body never sanctioned the deal.

He stated that not even the best lawyers in the United Kingdom would NOT charge those huge amounts for a “two-page letter” purportedly given to the faction of the governors’ forum on review of the judgment, insisting that it doesn’t appeal to common sense.

“The attorney general of the federation is pushing so vehemently on the side of people whose primary intent is to fleece the Nigerian people. Even the EFCC that reviewed all of these matters, actually accused the federal ministry of justice of lack of diligent prosecution of this matter.

“These matters were not appealed by the federal ministry of justice, admittedly not under Malami at the time. But what is happening now is just a continuation of the sleight of hand and that’s what the governors are challenging.
“I wrote to the president on behalf of my colleagues, sat with Mr. President on this issue and clearly Mr. President was misled and there’s no way governors are going to allow this.

“I will ordinarily not come out and do this, but my brother Abubakar Malami directed his media aides to accuse governors of being the ones behind this and he has repeated on your programme (on Arise Television) that we are forum-shopping,” he said.
He stated that Malami’s claims that part of the monies had been offset in the past and therefore was a basis for further deductions did not hold water, since it was possible to obtain money by fraudulent means, but that the governors are now insisting that the right thing should be done.

Fayemi pointed out that since the activities of public servants would be scrutinised by the public at some point after they exit their positions, it was imperative to display the highest form of transparency in all their dealings.
“I am afraid that we do not believe that the attorney general has demonstrated this (transparency) and that’s what has brought this about,” he declared.

Asked to confirm if the EFCC verified the amount being claimed by the consultants, he stated that it wasn’t possible, reason the governors had been calling for a forensic audit, since members of the anti-corruption agency are not forensic auditors.
For instance, he stated that the EFCC report revealed that one of the documents which was used to claim the huge amount by one of the consultants was forged, describing the whole matter as clouded with a lot of “malfeasance”.

He questioned why the attorney general, who is a Senior Advocate of Nigeria (SAN) was in a hurry to execute the so-called judgment of the lower courts when the governors had appealed the matter in a higher court.

He explained that because governors wanted access to the Paris Club fund when Buhari agreed to disburse it in 2017, they had some agreements with certain parties who had gone to court to block the money from being released, but noted that whatever they got was the full and final payment.

On the accusation of forum-shopping, he described the allegation by Malami as “ingenuous”, alleging that the directive by the attorney general for the release of the monies was basically to rip Nigerians off.

Fayemi stressed that it was an “insult” for the attorney general to insinuate that the governors were forum-shopping, a practice where a party attempts to have his action tried in a particular court or jurisdiction where he feels he will receive the most favourable decision or verdict.
“We have been very clear that these claims, to the best of our knowledge are fraudulent and should be subjected to a forensic audit.

“If states are found to be liable on account of the purported consultancy allegedly delivered by these people, because I don’t know how anybody can claim to have delivered on the refund that is already established, for anyone to suggest that they did that is a red herring.

“The best way to describe this 419 million dollars is to say that this is a local equivalent of the P&ID case and it’s an irony that the attorney general is the one prosecuting the P&ID all over the place and trying to rescue €8.48 billion for the Nigerian people and yet is so willing to release €355.18 million to people of dubious circumstances who are demanding for the money I don’t believe they worked for.”

But an analyst of the development who does not want his name mentioned told THISDAY that it would be disingenuous for Malami to continue to push for the payment of such a huge amount of money at this point in time when the economy is still reeling from the effects of the COVID-19, the consequent slump in federal government’s revenue and its inability to meet its OPEC daily crude export quota . “All these challenges have made the federal government to remain in the debt market, borrowing monies from every available avenue to meet its obligations.

Therefore, under the situation that the country finds itself, managers of the nation such as Malami should be more concerned about efforts to reflate the economy and should not be seen as the one encouraging steps that would further make the economy bleed.

At a time like this, focus should be on how to spend our way out of the present economic situation and on job creation for our huge youth population so as to raise productivity. All Malami is interested is paying consultants dubious consent judgment;

The analyst argued further that whether the governors initially allowed deductions to take place in 2016, “does not hold water because the variables available then are not the same as 2021 and there are now different players entirely who have looked at matter and realised something is not quite right in the all scheme. More so, when the deal was consummated in 2016, the dollar was around N150/€0.85 and now he is pushing for the consultants to be paid at around N450/$. We are talking about a colossal amount of money to be paid to a few people to the detriment of over 200 million people. This is just immoral however one looks at it, said the analyst.

“Clearly, as the chief law officer of the country, Malami should know that all his actions on this matter are not morally right and purely against public interest and it would be immoral for the president to even endorse the payment.”