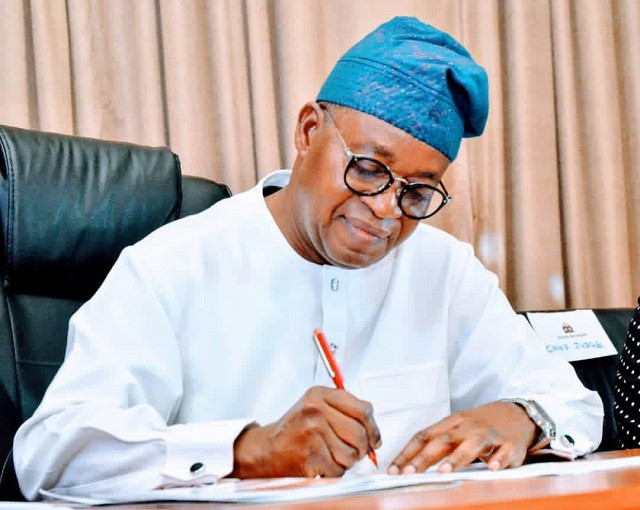 Osun state Governor Adegboyega Oyetola has signed the bill banning the practice of open grazing in the state into law.

The state House of Assembly passed the bill to regulate animal grazing and establishments of cattle ranches and other related matters.

Addressing the plenary, Speaker Timothy Owoeye said as passed, the bill would prevent the destruction of farms, crops by open rearing and grazing of livestock.

He said: “Mr Governor has signed the anti-open grazing bill into law immediately the bill was transmitted from the House of Assembly to the office of His Excellency.

“We have notified the security agencies that will enforce the law in every part of the state; so, it is a crime to practice open grazing in Osun state.

“Osun State is one of the most peaceful states in the country, we have fewer challenges of herders invading people farm to destroy the crop or attacking farmer because we had in place Committee on Peaceful Co-Existence between Fulani/Bororo and Crop Farmers led by Hon Mudasiru Toogun to foster peace between these communities.

“Before enacting this law, we have summoned stakeholder meeting to deliberate on the matter and we have enlightened the herders in the state on the benefit of embracing ranching system. We have made provisions for the practice of ranching through the ministry of agriculture.”

He said the law would prevent killings, sexual molestation, protect the environment from degradation and pollution caused by open rearing and grazing of livestock.

“Any person or group who contravenes the provisions of subsections (1) and (2) of this section shall be guilty of an offence and shall be liable to terms of imprisonment of not less than 3 years without the option of fine as well as forfeiture of the herds of cattle or livestock under his or her control to the state government.

“A minor is prohibited from grazing, rearing or herding of livestock except under the supervision of an adult.

“A minor who contravenes the provision of Section 3 (4) committed an offence, and the guardian or parent of the minor or owner of the livestock as the case may be, shall be vicariously liable on conviction to a fine of N300, 000.00 only,” Omipidan said.

The governor’s spokesman also said the conveyance of livestock on foot from one destination to another in the state is prohibited, except such movement is by rail wagon or truck or pick-up wagon and is within 7:00 am to 6:00 pm.

Similarly, Akwa Ibom state Governor Udom Emmanuel has signed into law a bill that prohibits open grazing of cattle in the state.

The bill was presented to the governor Wednesday by the Attorney General of the State, Uko Udom, in the presence of Speaker House of Assembly Aniekan Bassey at a brief signing ceremony in Government House Uyo.

Signing the bill into law, the governor said the new law is a no respecter of persons, irrespective of status.

With the signing of the bill into law, Akwa Ibom now joined Rivers, Bayelsa, Oyo, Ekiti, Abia, Lagos and Enugu as states with anti-open grazing legislation. It is the eighth state in southern Nigeria to enact the law.

The new Akwa Ibom law, which also provides for the establishment of ranches in the state, was passed Tuesday (yesterday) by the Akwa Ibom House of Assembly.

Emmanuel directed relevant authorities of government to ensure the law is enforced in the state, adding culprits must be brought to book.

Southern governors in Nigeria had reached a resolution July 5, 2021, in Lagos, for member states to enact legislation against open grazing of cattle in their states on or before September 1.