Northern Lawmakers Visit Tinubu In London, Endorse Him For President 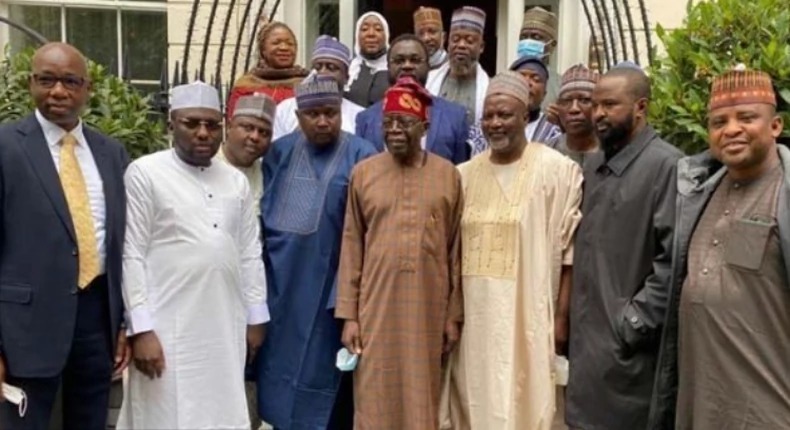 National Leader of the ruling All Progressives Congress, Asiwaju Bola Tinubu continues to receive visitors from Nigeria as members of the House of Representatives from the north visited him in London to endorse his rumoured presidential ambition.

There have been rumours that Tinubu might be interested in running for president in 2023 even though he has yet to announce his interest.

On Friday, October 1, 2021, a delegation of northern lawmakers led by Ahmed Wase, the Deputy Speaker of the House of Representatives visited Tinubu in London where he has been receiving treatment.

According to Punch, a member of the delegation disclosed that the visit was to endorse Tinubu for President.

The lawmaker said, “We in the North (House of Representatives caucus) are kind of endorsing his candidature because he is a national leader and you know that he is aspiring (allegedly). Whether you like it or not, he wants to be President of this country. So, we felt that if the northern caucus of the National Assembly — in the House of Reps — would come to see how he is recuperating, we thought that it would mean so much.

“He really appreciated our coming because he said he rated our coming second after the visit of President Muhammadu Buhari. He mentioned that governors and others came but this is a mini Nigeria in the House of Reps, for the entire northern caucus to find time to come and see how he is faring.

“He stood up and walked. I’m sure you have seen the video. I think he has recovered; he is not doing badly at all — this is not politics. I think because of his age, he has to still go for physiotherapy and things like that. These are things that will take time for him to fully do some politicking. He will soon come back to Nigeria.”

Suleja while accompanying Tinubu to a waiting car alongside other lawmakers said “Mr President, see you soon,” and the former governor of Lagos replied, ‘Thank you.’

It would be recalled that President Muhammadu Buhari while in London to participate in the Global Education Summit on Financing Global Partnership for Education (GPE) 2021–2025) seized the opportunity to visit Tinubu.

Some of the politicians who have visited Tinubu in London with photo-ops to boot, include Governor Babajide Sanwo-Olu of Lagos, Governor Umar Ganduje of Kano, Governor Dapo Abiodun of Ogun and Rotimi Akeredolu of Ondo.