NJC Moves To Sanitise The Judiciary

The move by the CJN as well as the NBA will help redeem the image of the judiciary, especially when any judge or lawyer found culpable is given the maximum sanction to serve as a deterrent to others. 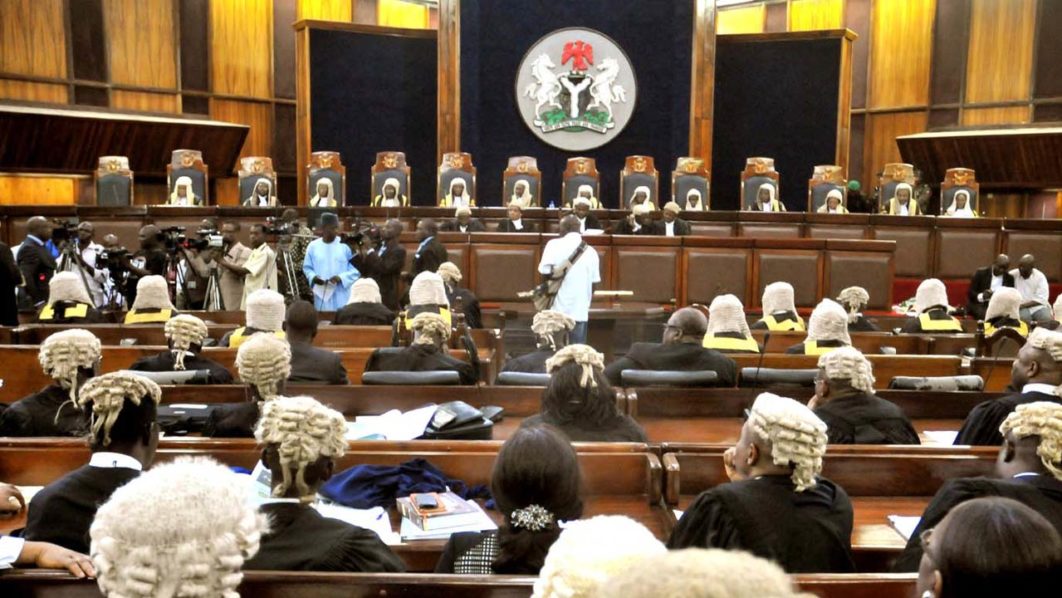 The recent actions by the National Judicial Council ahead of the 2023 general election show that the body is determined to put an end to impunity and misconduct in the judiciary, on election matters, writes Vanessa Obioha

As part of efforts to remove the bad eggs from the judiciary, the Chief Justice of Nigeria (CJN), Justice Ibrahim Tanko Muhammad, has ordered the Judicial Service Committee (JSC) of the Federal Capital Territory (FCT) to immediately initiate disciplinary action against the Upper Area Court Judge who issued direct criminal summons against a former governor of the Central Governor of Nigeria (CBN), Professor Charles Chukwuma Soludo.

Justice Gambo Garba of the Upper Area Court, Zuba, Abuja, had in July 2021, issued a direct criminal summons against Soludo over his alleged failure to declare his assets while serving as the CBN governor between May 29, 2004 and May 29, 2009.

It was gathered that from all indications, the Chief Justice of Nigeria and Chairman National Judicial Council, Muhammad, seems determined to put an end to impunity and misconduct in the judiciary”.

The acting Chief Judge of FCT is expected to submit his findings to the CJN within 21 days.

The CJN had met with the chief judges of the FCT, Rivers, Kebbi, Cross River, Jigawa, Anambra and Imo states on Monday, September 6, 2021 and directed some of them to admonish the judges in their jurisdictions on the danger of granting ex parte injunctions.

The move followed concerns by Nigerians over the spate of incongruous and conflicting orders by courts of coordinate jurisdiction against political parties, politicians and the Independent National Electoral Commission (INEC).

This was obviously accentuated following the build-up to the Anambra State governorship election.

Muhammad had recently summoned Chief Judges of six State High Courts across the country where these were prevalent.

The move was fuelled by an urgent need to halt the decay, disregard, contempt of the judiciary, occasioned by the indiscriminate granting of court orders and injunctions by some judges.

Unlike previously when the NJC would wait for a petition from the public before investigating and disciplining any erring judge, the CJN on his own, in this instant case, took the decision to look into the issue with the possible punishment of any judge found culpable.

Among the affected CJs the CJN had invited for explanation is that of Rivers, Kebbi, Cross River, Anambra, Jigawa and Imo States High Courts.

According to the invitation letter dated August 30, the heads of the courts were to appear before the CJN as a prelude to the forthcoming plenary of the NJC to explain what might have warranted the issuance of conflicting court orders by judges in their courts.

Between June and August 2021, no fewer than six High Court judges had issued restraining orders on INEC and major political parties in the country, as well as the National Chairman of the Peoples Democratic Party (PDP), Prince Uche Secondus.

From the tone of the CJN’s invitation letter, it was obvious that the CJN was very bitter over the development, which sources around the CJN noted is a huge embarrassment to the Nigerian judiciary and the country at large.

However, it was not only the leadership of the bench that had been worried about the unfortunate descent of the judiciary in recent times.

Few hours after the CJN’s summons of six Chief Judges, the leadership of the umbrella body for lawyers, the Nigerian Bar Association (NBA) issued a statement condemning the development.

President of the NBA, Mr. Olumide Akpata, in the statement issued August 30, promised that the body would support necessary steps to stem the tide, adding also that it would not hesitate to sanction lawyers behind the unfortunate acts.

It would be recalled that Justice Chioma Nwosu-Iheme of the Court of Appeal, Awka, Anambra State in a judgment early August had indicted lawyers for shopping for favourable judgments for politicians. The judge in a ruling on the authentic governorship candidate for the APGA, called for disciplinary actions against the judges of the High Courts that went out of their territorial jurisdiction to entertain motions due to alleged inducements.

She also made similar recommendations against the lawyers that brought those applications before the judges.

“By the issuance of this statement, the NBA confirms unequivocally that it will not stand by and watch a ridiculing of the profession and the justice administration system by a handful of its members and will be considering its deterrence options in this regard,” Akpata said.

To this end, Akpata said the NBA would urgently seek audience with the CJN to address this issue holistically and as such would “enlist the support of the Chairman of the NBA Judiciary Committee, Dr. Babatunde Ajibade, (SAN) as well as the Chairpersons of the NBA Section of Legal Practice (NBA-SLP) and NBA Section on Public Interest and Development Law (NBA-SPIDEL), Mr. Oluwaseun Abimbola (SAN) and Dr. Monday Ubani for this proposed engagement.”

Although the country’s constitution and the Electoral Act allow the judiciary (courts and election tribunals) to intervene particularly when issues of non-compliance, manipulation, violence allegedly marred the process of electing a particular representative, however, the manner and ways these interventions are being carried out by some judges have become a source of worry and strong concerns, particularly as preparations for the 2023 general election gears up.

There are fears that if the interventions of the courts within the last two months in the Anambra governorship election are anything to go by, one can only predict dangers in 2023. Between June and August alone, various courts have given orders and counter orders to INEC over who to be on the ballot for the three major political parties contesting the November 6, governorship election. And sadly, most of these orders were issued by courts that lacked the territorial jurisdictions to hear such matters.

Most sadly is the fact they the orders were hinged upon ex parte application for which the leadership of the judiciary has warned judges to be “circumspect” of. For example, INEC had on July 16 published the name of Umeoji as the APGA candidate following an order by the Jigawa State High Court on June 28. On July 18 Justice Charles Okaa of Anambra state High Court directed INEC to publish Prof. Charles Soludo’s name as APGA’s candidate. Meanwhile justice Iheka of the Imo state High Court again ordered INEC to publish Umeoji’s name as APGA’s candidate.

Still on the Anambra governorship poll, Justice Obiora Nwabunike, of an Anambra State High Court, had declared Ugochukwu Uba as the PDP candidate for the November 6 governorship election, while at the same time, Justice Hyeladzira Nganjiwa, of a Federal High Court, Awka, ordered INEC to publish the name of Valentine Ozigbo as candidate of the PDP for the same election.

At a point, INEC had to drop the names of APGA and PDP candidates from the list despite its assurance to obey court orders. According to INEC, the decision was taken in cognisance of the judgments/court orders served on it in relation to the primaries of the political parties and other processes leading to the election.

The courts were again indicted for another professional misconduct in the case of PDP National Chairman, Secondus with one High Court appearing to be sitting as an appellate court over another, suggesting that something else is involved outside the pursuit of justice.

First, Justice O. Gbasam of a High Court of Rivers State, on August 23, 2021 issued an order of interim injunction restraining Secondus from carrying on as Chairman of the PDP, pending the hearing and determination of a suit challenging his continued stay in office.

Justice O. Gbasam of the Degema Division of a High Court of Rivers State, sitting in Port Harcourt issued the orders while delivering ruling in an exparte application by some chieftains of the PDP in Rivers State.

But three days later, August 26, Justice Nusirat Umar of the Kebbi state High Court ordered Secondus to return to his position as the National Chairman. The judge made the order while delivering ruling in a suit marked KB/AC/M. 170/2021, filed by three concerned members of the party, Yahaya Usman, Abubakar Mohammed and Bashar Suleman.

Just like the electoral umpire, which was confused on which of the various High Courts orders to obey, the PDP was also confused on which of the orders to obey. Initially Secondus obeyed the order of his suspension but later said he is obeying the latter order to go back to office. So, the confusion continues, with negative impact on the judiciary and the image of the country globally.

An exparte application, which is a preservative order is usually granted by a court to protect the ‘res’ from being destroyed, abused, or tampered with. Before granting it, a judge must be fully convinced that something is being endangered and needed court’s temporary order for protection, and preservation before parties are called upon to present their cases for adjudication. However, in all these cases where the affected courts have issued restraining order, nothing seemed to be in danger that must be protected by the court.

Rather than granting the applications, these judges ought to have placed the respondents on notice. This is where the need to be circumspect as has been advocated comes in.

Since the Supreme Court in several decisions, had held that the internal matters of political parties are not issues of the courts, one begins to wonder the attraction to disobedience and disregard to precedence by some judges.

The move by the CJN as well as the NBA will help redeem the image of the judiciary, especially when any judge or lawyer found culpable is given the maximum sanction to serve as a deterrent to others.