Nigerian Law School Student Graduates With 2nd Class Lower Despite Having 4 As And 1 B, Many React To Result

He didn't make a first class due to the grading system but he wasn't going to let his efforts go uncelebrated, so Al-Ameen uploaded a copy of his results online to celebrate himself. 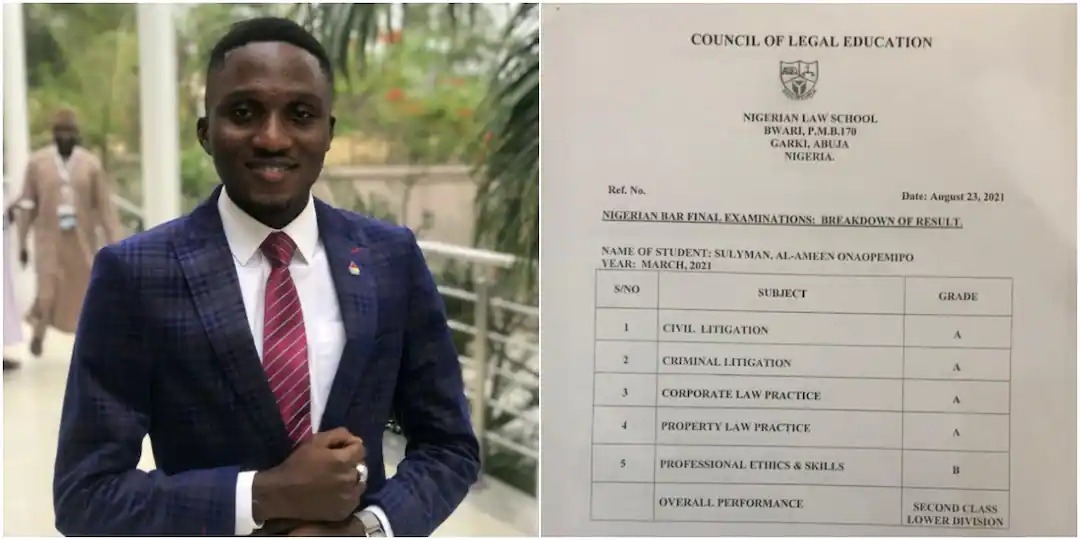 He didn’t make a first class due to the grading system but he wasn’t going to let his efforts go uncelebrated, so Al-Ameen uploaded a copy of his results online to celebrate himself.

He wrote: “I remember joking with my friends earlier on about how we were part of not part of the exclusive Top 7.5% that posted their results on LinkedIn and I really always dreamt of coming on here and celebrating a first class from Law School so of course,I was going to post this,regardless.” He was less than 20 marks away from a first class The young man made B in just one course, which deprived him of a first class. He noted that he was hurt by the development. In his words: “Getting a B in Ethics in particular hurts, knowing I was less than 20marks away from a first class might take time to come to terms with.

“Considering it was a final paper in a 5 day exam marathon, the mental and physical exertion eventually took its toll and I just had to get it over the line. To be judged on your worst grade hardly makes any sense.” He plans to show the world his ability Al-Ameen wouldn’t allow his law school result to discourage him from showing the world what he can offer. According to him, he will work to change the unfair grading system the Nigerian Law School has adopted. He said: “I’m still super proud of my efforts, studying in a Pandemic, self taught for most of the academic session and rather than be discouraged, I’m even more motivated to show the world the stuff I’m made of,being the best lawyer possible and work as much as I can to change such an unfair grading system at any chance I get.”

Social media reacts
Nosa John Graham Garrick said: “I’m super proud of you and can attest to your work ethics and willingness to learn.
“You’re not defined by this grade and I’m sure you will excel nonetheless. Keep your head up! Al-Ameen Sulyman . You’re doing just fine.”

Ameh Adejo commented: “I feel you brother. I can only imagine how you feel; but let it be a spring for greater tomorrow as you consign this to yesterday.”

Olabode Olajide wrote: “Do not let the grade define you Al-Ameen Sulyman. Go in, show your worth, and conquer. I am sure you’ll do exploits!”