Chief of Naval Staff, Vice Admiral Awwal Zubairu Gambo, has said Nigerian Navy is set to establish an outpost at Ikang and a naval security station at Dayspring Island. 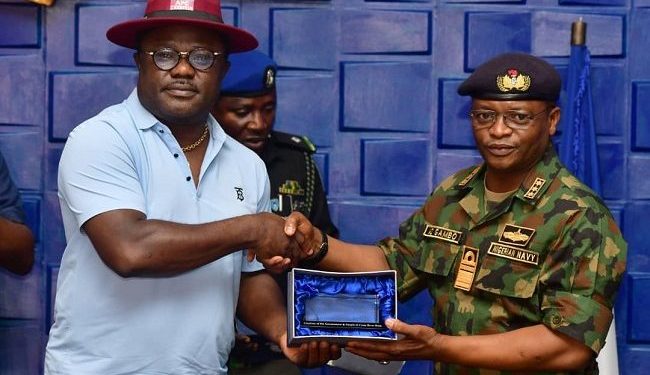 Chief of Naval Staff, Vice Admiral Awwal Zubairu Gambo, has said Nigerian Navy is set to establish an outpost at Ikang and a naval security station at Dayspring Island.

Both locations are in the Bakassi Local Government Area of Cross River which shares maritime boundary with the Republican of Cameroon.

Vice Admiral Gambo, yesterday, during a visit on Governor Ben Ayade in Calabar, said the move has become necessary “because we are aware of the security situation in the state, including cultists, kidnappers and other criminal elements- and to that effect, it has been part of our strategic plan. I think it is expedient, speedily, we establish outpost and security station in these locations so that we can improve our security architecture in the state and of course, secure our borders and around the Republic of Cameroon.”

Assuring the governor of the Navy’s commitment to the security of the state, the Naval boss said: “We have to keep our eyes open and to ensure Cross River State and Nigeria at large is secured from that angle.

“We want to reassure you of the availability of the Nigerian Navy; we are at your service to ensure Cross River State and its people are safe and secured for economic prosperity and development

“I want to inform you of the ongoing general operations in the creeks around the state to ensure we rid it of all criminal elements; the cultists, the kidnappers and all that to make sure it is safe for maritime business to thrive since Cross River is a littoral state. In that regard, we are also collaborating with other agencies, including the Army, the Air Force and of course, the police and other security agencies to ensure the waterways are safe and secure for the prosperity of the people of Cross River State.”

NEWER POSTLagos Assembly Adopts Report To Stop Provision Of Houses For Ex-Governors, Others
OLDER POST11 Requirements For Obtaining Letters Of Administration At The FCT High Court