He said:” The most important thing to do now is to thank God. God made it possible, not anybody. We won at the Tribunal, we won at the Court of Appeal and we also won at the Supreme court. It is good to thank God”, he stressed. 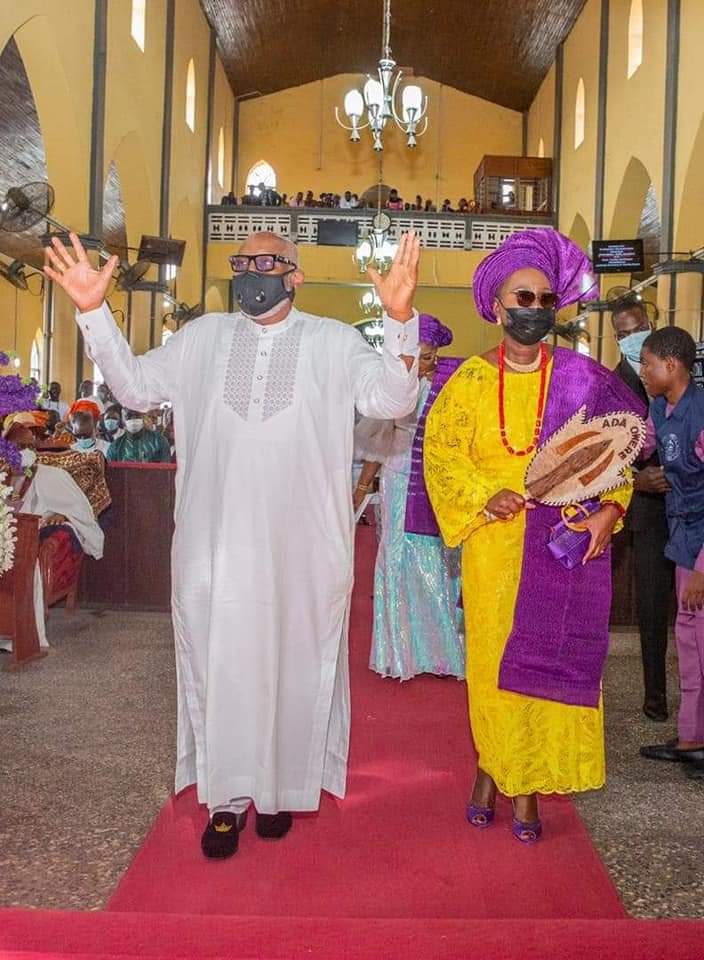 Ondo State Governor, Arakunrin Oluwarotimi Akeredolu, SAN, has described his victory from the Election Petition Tribunal to the Supreme Court as one of the many miracles of God in his life over the years.

Governor Akeredolu, who led eminent citizens of the state and other dignitaries across the country to a Thanksgivings on Sunday, noted that he owed his victory at the apex court to God Almighty alone.

Speaking at a special thanksgiving service held at the Cathedral Church of St. Andrew’s Anglican Communion, Imola, Owo, his home town, the Governor who was full of joy vowed to continue to offer praises to God for his endless mercies.

Arakunrin Akeredolu, his wife, Betty Anyanwu-Akeredolu; the Deputy, Lucky Aiyedatiwa, his wife Oluwaseun, led the government of the State, members of the ruling All Progressives Congress (APC), the people and well-wishers to give thanks and adoration to the Lord in grand style.

While thanking the people of the state who voted him overwhelmingly in the October 10, 2020 governorship election, the Governor said the Thanksgiving was a fulfilment of his pledge to God.

He said:” The most important thing to do now is to thank God. God made it possible, not anybody. We won at the Tribunal, we won at the Court of Appeal and we also won at the Supreme court. It is good to thank God”, he stressed.

He appreciated his legal team for doing a good job while assuring that he will continue his developmental projects across the state.

Governor Akeredolu also solicited the support and prayers of all, saying the prayers of the religious leaders and others have always been answered over him.

In his sermon, the Bishop of Owo Anglican Diocese, Rt. Rev Stephen Fagbemi, who spoke on “Divine Intervention in the Hour of Need”, described God as a God of mercy who can rescue people from any situation.

He congratulated the Governor, his wife, the Deputy Governor and wife for the series of victory both at the governorship polls and the various courts, saying that only the fool would say there is no God.

“If God is for us who can be against us? God is greater than all technicalities. My Chancellor and Mr Governor, I don’t know how you deserve this unmerited grace but what I know is that God has a covenant of grace and mercy with your family. But for God, this judgement could have gone the other way.” He said.

At a grand reception for guests and well-wishers held at Midas Hotels and Resorts, Owo- Ikare Road, Owo, The APC Acting chairman, Ade Adetimehin and the Minister of State for Niger-Delta Affairs, Tayo Alasoadura, appreciated God for not allowing enemies to rejoice over APC and the people.