Mohammed Uwais At 85: A Remarkable Bench Career By Lillian Okenwa 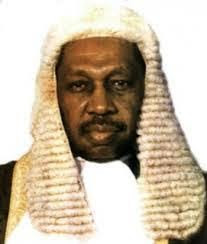 I was transferred from Lagos to Abuja as the Judicial Correspondent for ThisDay Newspapers in the early part of 2001. Later that year, my Law Editor, Ms Funke Aboyade, now a Senior Advocate of Nigeria, on a visit to Abuja, told me it was important that I cover the Supreme Court; collect all their judgments which were usually delivered on Fridays and despatch to Lagos. She also told me that I needed to get acquainted with the Chief Justice of Nigeria.

Putting action to her words, she took me on a visit to his chambers. His Lordship, Hon. Justice Muhammadu Lawal Uwais received us warmly. It was a memorable visit. What struck me then was his simplicity; I found it hard to believe that this man with a humble mien was the head of the entire country’s judiciary. He acted so ordinarily and approachable. I was deeply impressed.

Over the years, Justice Uwais has remained an epitome of humility. I have been privileged to be a beneficiary of his wisdom, guidance, magnanimity.

His Lordship believed so much in me that he gave me an opportunity to produce my first video documentary; The Supreme Court of Nigeria, First 50 Years. My acknowledgment of him in my book – Court of Appeal, 40 Years and Counting, bears testimony of his immense influence on my professional development and I hereby reproduce it.

“To Hon Justice M.L. Uwais, for paving the way into documentary making; patiently enduring my continual borrowing of his books, materials, and ideas. What about the unending phone calls to ask questions? Your, Lordship, I can’t thank you enough!”

At 36 Hon. Justice Uwais was already on the High Court Bench. At 41 he was at the Federal Court of Appeal, as it was then called. By the time he turned 43 he’d made it to the Supreme Court and earned the nickname “baby of the court.” He would eventually serve for 27 years, out of which he was Chief Justice of Nigeria for 11 years. Having attained the statutory retirement age of 70 for appellate court judges with a little over 33 years in judicial office, His Lordship retired June 12, 2006.

For one whose dream was to become a judge at 45 and probably retire from the High Court at 65, Hon. Justice Muhammadu Lawal Uwais is indeed a child of destiny.

Following his elevation to the Supreme Court on August 15, 1979, along with the late Attorney General of the Federation, Hon. Justice Augustine Nnamani under General Olusegun Obasanjo, then military Head of State, his first case was the popular 12 two-third case between the late Chief Obafemi Awolowo and Alhaji Shehu Shagari.

Still very fresh at the court, Uwais was invited by the then Chief Justice of Nigeria, Hon. Justice Atanda Fatai-Williams to join the panel that decided the appeal which today is a cause célèbre. This was because Justice George S. Sowemimo who later became a CJN himself declined to be part of the panel. Sowemimo’s excuse was that he convicted Awolowo in the 1960s in the then Western Region.

Hon. Justice M.L. Uwais, born on June 12, 1936, in Zaria, Kaduna State, will be remembered for making many remarkable imprints on the court and indeed, Nigeria’s judicial system. His court, amongst many notable judgments, will be remembered for expanding the political landscape by allowing the registration of new political parties by the Independent National Electoral Commission (INEC) in November 2002.

Okenwa, a legal practitioner is Editor-in-Chief/Publisher of Law & Society Magazine. She wrote from Abuja.