Lekki Procession One Year After – By TONY AFEJUKU 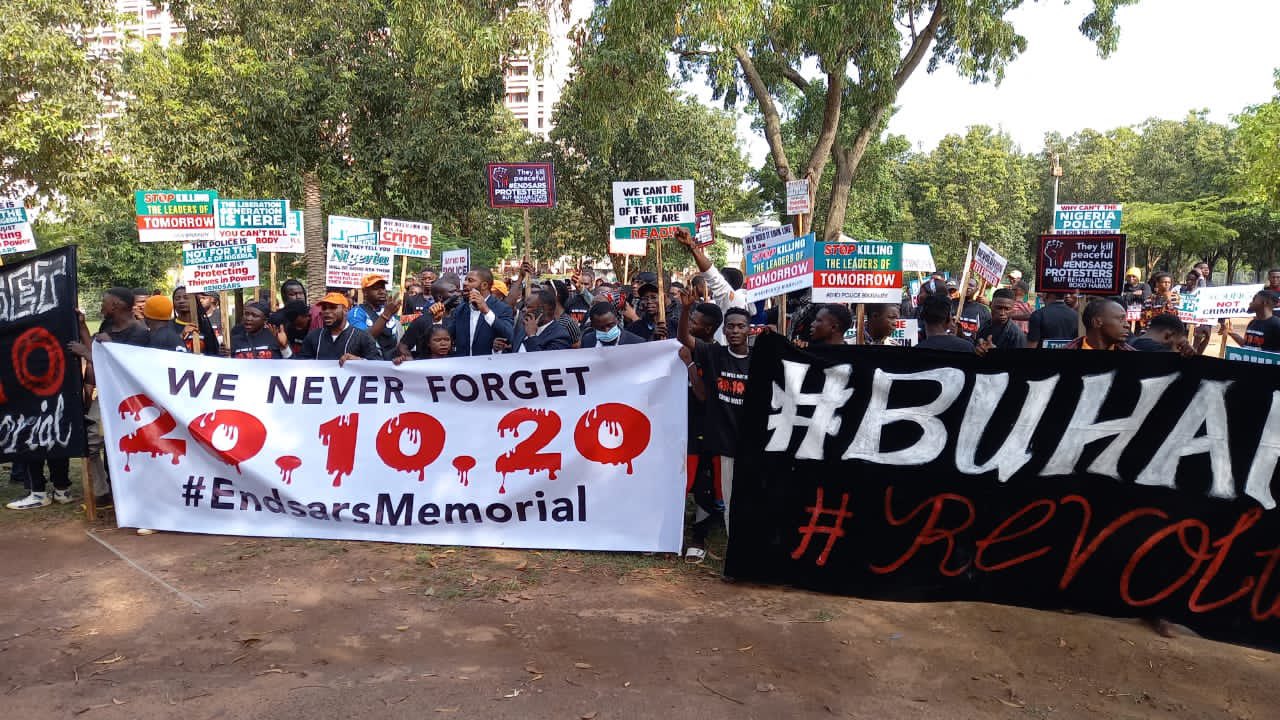 I was toying with the idea of submitting my creative and journalistic concision to the matter of Justice Mary Odili, the Supreme Court justice next to the Chief Justice, who everything being equal would be succeeded at the appointed time by the brilliant and concentrative female jurist who has appealed to me as our apex court’s juristic lioness – who seemingly is a charming lover of juristic jousts. She is positively addicted to jurisdiction as a thoroughly bred jurisprudent top officer of the law. We all remember that very, very recently her official residence was going to be turned into a place of chaotic chaos by some juntos in control of our apex jural establishment. But the super-woman, the super-lioness resisted stoutly the chaotic invasion. Her will to power of the superman or superhuman in her enervated – and still enervates – me to the extent that she must elicit from my pen rhetorical-oratorical descriptions without excessive word-play and word-play. What do we make of this? What do you make of this? Of course, whatever we can or will and whatever you can or will. Phew!

When at the point of firm readiness for me to pen this column on the juristic super-heroine, the rich news report regarding the October 2020 Lekki incident visited me, to wit: “Lagos State Judicial Panel of Inquiry on Restitution for Victims of SARS Related Abuses and other Matters.” The 309-page report was procreated by numerous persons in my phone. The chair-person of the judicial panel was Justice Doris Okuwobi, another judicial lioness, honourable retired judge of the Lagos High Court whose badge of particularity is her calling a spade a spade without mincing words. She is indeed a unique judge worthy of emulation by all lovers of high integrity. I have not read the full report. In fact, I have not even begun my studious and diligent reading of the report. But the quotation, the epigraph that heralds it somewhat anticipates its conclusion: “Between the agitation and the state’s political cum belligerent reaction to lawful dissents there is a space and in that space is our power to choose to engage responsibly in the spirit of unity, equity and fairness towards winning the peace.” This looks captivatingly good and more than captivatingly good.

The reports from the print media as well as the ones in my phone clearly stated that the judicial panel indicted the Army and the Police and concluded that what happened at Lekki at the material time was massacre and nothing short of massacre. What this means is that the Army and Police lied when they claimed or declared that nobody died when they went to disperse the Lekki chaps who legitimately were in procession at Lekki to exercise their legitimate and fundamental rights as human beings and as citizens of this country that the young and youthful flowers of our age of bombs and chaos and thunderous thunder wanted to change and reconstruct for our common good and desire against destruction. The unquenched desire of reconstructive and restorative Nigeria that like vivid lightning flashed from each clear mind of those on the procession was raged against and paralyzed by our brutes in uniform and out-of-uniform.

The Army lied. The police lied. Lai Mohammed, the megaphone of this central regime of death, lied when he joined the peddlers and paddlers of death in the lagoon city to say that no one was butchered when the sharks of annihilation swam on land to devour innocent young ones maimed and killed by mad dogs who were madder than mad dogs. The Lagos judicial panel has given us the portrait of our hard government men who are now, ironically, victims of their lies, madness and wickedness. I hope Lai Mohammed will now fully recover his harsh hatred for the CNN of America that stuck to its gun and did not relent in its marvellous efforts to depict the terror of the monstrous monsters who consumed our marvellous young ones? Lai Mohammed can now re-banish from our shores CNN who said “no” to the very end. Lai Mohammed can now re-bar CNN from our air space and screens. Of course, the government the megaphone serves has no bar of decency. For this reason he and his cohorts can whip up new sentiments of lies and insanity and cruelty to cage our compatriots and to defame CNN and our local and national media – electronic and print and social. Their lies and wickedness will be part of the calumny that will swallow them as the python of their very own very destruction.

Everything I am saying here now comes into my mind as the Lekki procession one year ago re-enters me. The hymn the members of the procession(s) sang and hummed was the hymn of patriotism. The hymn was the emanation of the Holy Spirit of Godly patriotism and of goodness that should be satiable and insatiable at the same time. The procession was a kind of cleansing odyssey which was expected to bring supreme patriotic virtue and value to our compatriots in and not in government. All the people at the procession were super-people who were imbued with the will to power your country my country our country to our love-land and love-island of patriotic virtue to enable us to conquer our encumbrances. The Holy Spirit of the procession was the Holy Spirit to protect our humanity and to cage the inhumanity of the sharks, jackals and hyenas and pythons devouring your country my country our country. Their aggressive bombs, stubborn thunder, and flesh-eating greed constantly tormented our humanity as they still do.

Now will the governor of Lagos State be man or superman enough to be thunderously hard to deflate the dreams and longings of the Lekki sinners? Is Governor Babajide Sanwo-Olu possessed of the super-human genius which should create in him simultaneously the form and content of justice that is justice to point and paint a very visible and very potent vision to liberate all evil people in power from their respective states and islands of un-happiness, greed and cruelty that compel them to bury the happiness of the citizens they lord it over? Can Governor Sanwo-Olu be the exemplary governor to give the people what they seek: “ultimate happiness upon blissful islands,” as Friedrich Nietzsche would put it? Can the governor use the report of the Lekki judicial panel he courageously set up to give Nigerians “mines of happiness and treasure-houses and new gold-veins of happiness”? I have quoted Nietzsche finally for now even though I am not a full disciple of Nietzsche yet. Very clearly and very visibly and very potently so, the Lagos State governor will write himself in our history of everlasting happiness if he has the will power of the Superman to do purely what he purely must do. His significance, his appreciation will be the appreciation of ageless ages. We will forever remember him the way we remember poets of intense humanity. Thus spoke Zarathustra! This was in my moment of sacred and revered contemplation and meditation.