According to Odinkalu, “One remarkable thing here is the collective failure of indignation. If this incident took place in open court, then it was public. That makes it a classic case of #InfamousConduct in Rule 1 of the Rules of Professional Conduct. It belongs to the #LPDC, pronto!” 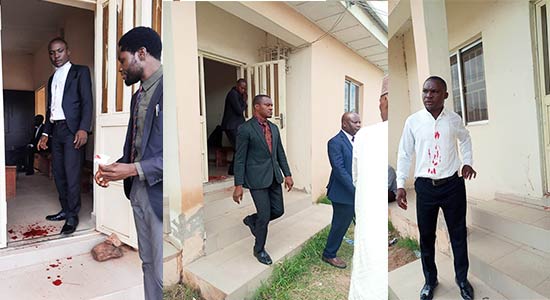 Two lawyers, Messrs John Yuwa and M.K Gurumyen on Thursday during proceedings in a criminal case before a Gombe Chief Magistrate Court exchanged hot words and turned the court room into a temporary boxing ring where the latter serially punched the former’s jaw until blood streamed out, staining the ‘combatants’, their robes and the court floor.

The cause of the open fight, it was learnt, was an oral application moved by a Jos-based lawyer, John Yuwa for a 30-minute stand down in Case No: CMCIII/GM/42/20t7 between Hajiya Ladi Baba Umar & 2 Ors V Bilyaminu Shehu & 2 Ors before the Gombe Chief Magistrate Court to enable his client who stepped out of the courtroom to get drugs come back to enter the dock.

According to a petition forwarded to the President of the Nigerian Bar Association (NBA), Yuwa said the moment he mentioned to the court that he wanted a stand down because of his client that was sick and who had stepped out to get drugs, he said the prosecution counsel, M.K Gurumyen reacted provocatively.

His exact words in the petition: “After my application for a 30-minute stand-down, the prosecuting counsel, Oct Mukna’an Kingsley Gurumyen Esq. with Enrolment Number: SCN051591 was invited by the trial magistrate to respond.

“In his response, the respondent stated that if the third accused person, for whom I had sought the stand-down, was actually sick, he should be healed, but if my submission was a lie, then the third accused should suffer more severe pains.

“Although his submission was highly provocative, I resisted the urge to quickly register my objection thereto.

“Perhaps perceiving that there was weight in his submission, his emphasis on the fact that I was lying surged; he repeatedly informed the Honourable Magistrate that I was lying, and that God would punish the third accused person for lying.

“Initially, I had thought the Honourable Magistrate would call the Respondent to order on his line of submission; but I noticed that the Magistrate was urging him on. It was at that point that I rose to object, pointing out that I was speaking from the Bar; hence I should be given the benefit of the doubt.

“More to the above, I reiterated to the Magistrate that the third accused had been in court before the commencement of the day’s proceedings; and that my application was for a stand-down, not an adjournment.

“Whilst I was still standing and trying to draw the Magistrate’s attention to the objectionable aspects of the Respondent’s submission- that is, the name-calling, the respondent started shouting and ordering me to sit down immediately.

“And before I could comply with the respondent’s “magisterial” order, he stretched his hand, and punched me ferociously on my jaws. The punch tore my jaws into ugly halves, and left a stream of blood flowing profusely and unabatedly.

“It is important to state clearly that the punch came with so much ferocity and suddenness that I was left only with the option of trying to escape death. And luckily for me, one of the accused persons, other lawyers in court and litigants came to my rescue.

“May I add, as it can never be over-emphasised that, as a law-abiding citizen and a gentleman of the revered Bar, I did not retaliate or attempt to do so even afterwards: I immediately requested the other accused persons who were in court, specifically the second accused person in the case to put a call to the police.

“The police immediately arrived at the court premises and arrested the respondent. He was taken to the Police Command Headquarters in Gombe, Gombe State for investigation and possible prosecution.

“Whilst we were at the Command Headquarters, the Chairman of the Gombe Branch of the Nigerian Bar Association intervened: he requested the police to allow members of the Bar resolve the matter amicably.

“However, at the secretariat of the NBA, Gombe Branch where members gathered to plead with me to forgive the respondent of the criminal and highly unprofessional conduct notwithstanding the grievous bodily hurt I suffered, the respondent, to the utmost surprise of all, including myself, remained remorseless. He refused to utter any word of apology, and even grew more hostile towards me raining more insults and threatening more vicious blows!

“In fact, it took the intervention of senior members of the Bar, and others present at the NBA secretariat, for me to escape that second wave of the respondent’s physical assault.

“This petition has, therefore, become necessary in view of the fact that, beyond the grievous physical assault on my person in court—in the presence of litigants, the respondent had on previous occasions as testified by colleagues, judicial officials and even litigants, manifested these thuggish and un-lawyerly attitude, in one of the many instances, the respondent was reported to have attacked a court clerk; but that incident passed without retribution.

“It is against the backdrop of the foregoing, specifically the need to foster respect for the legal profession, and to save the Bar from being dragged into disrepute, that I petition your good office for immediate disciplinary actions against the respondent.

“While anticipating your kind and prompt response, and confirming my availability to provide more details in support of this Petition, kindly accept the full assurances of my high regard.

The former Chairman of the National Human Rights Commission (NHRC), Professor Chidi Odinkalu, has described the incident involving the two lawyers at the Gombe State Magistrates Court as infamous conduct.

According to Odinkalu, “One remarkable thing here is the collective failure of indignation. If this incident took place in open court, then it was public. That makes it a classic case of #InfamousConduct in Rule 1 of the Rules of Professional Conduct. It belongs to the #LPDC, pronto!”

He blamed the bar, the bench and the leadership of NBA Branch leadership for such conducts.

According to him, a profession without consequences makes law irrelevant.

“What this case advertises is the failure of all facets of the profession-the Bar, the Bench, the branch leadership & more. A vocation without consequences invariably makes the law an irrelevant instrument without consequences, That’s how you end up with a place like #Nigeria.” Odinkalu added.