[INTERVIEW] “Poverty Is Not An Excuse….”- ‘Mai-ruwa’ Who Is Now A Lawyer

My struggle started when I was in secondary school because I lost my father and life became difficult for the family. I hired a cart from a neighbour and started selling water. With the little money I was saving, I was able to help my mother and sponsored my secondary school education and diploma in Law. I wrote JAMB examinations three times and also sat for WAEC and NECO examinations for eight consecutive years from 2001 to 2008 before I was able to make credit in English Language. 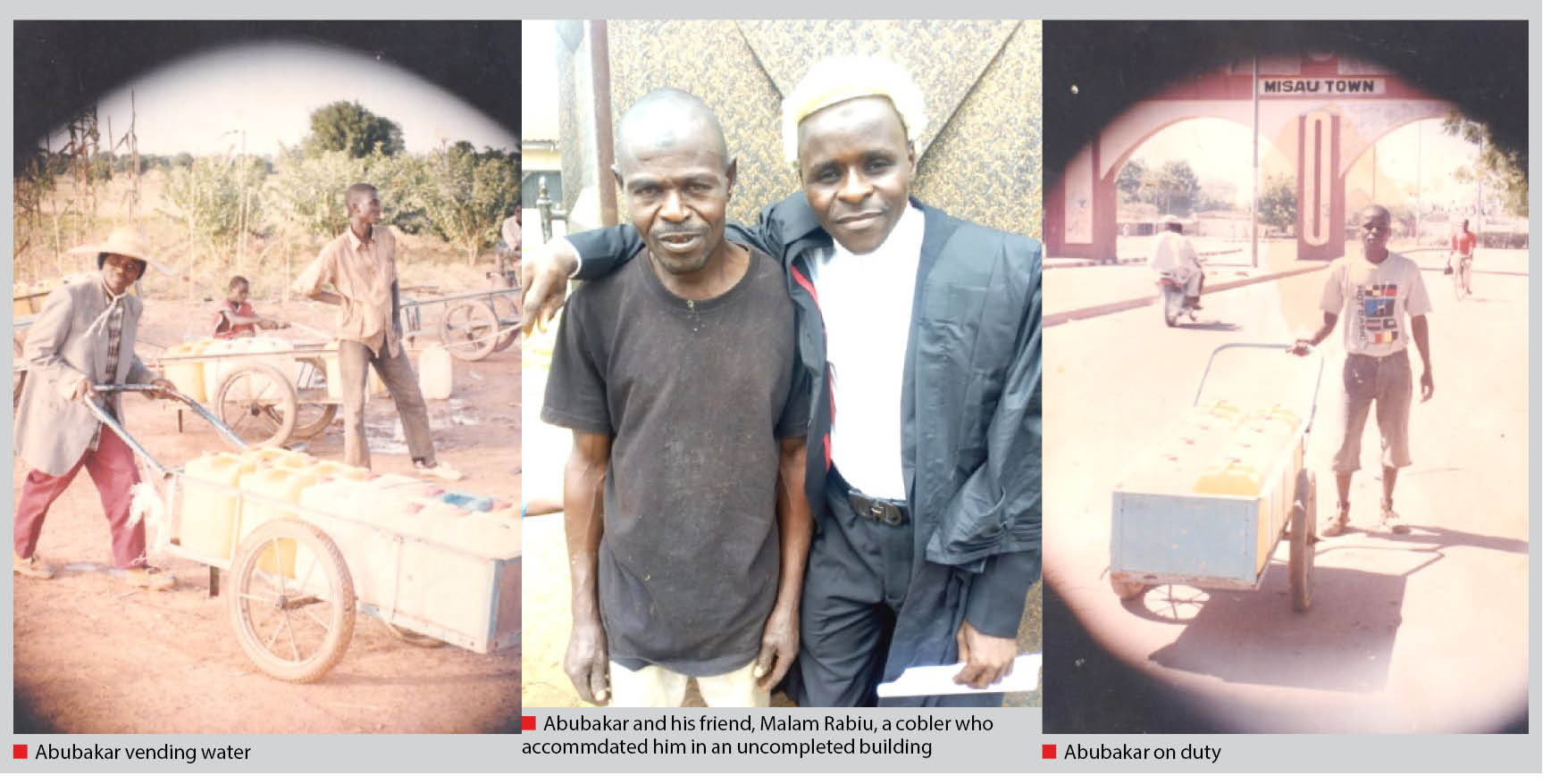 Ibrahim Abubakar, popularly known as ‘Mai Kayan Law,’ was ﬁnally called to the bar after his successful second attempt at the Abuja campus of the Nigeria Law School, Bwari. In this interview, he tells the story of how he sponsored his education through water vending.

You were a water vendor but now a lawyer. How did you achieve this feat?

My struggle started when I was in secondary school because I lost my father and life became difficult for the family. I hired a cart from a neighbour and started selling water. With the little money I was saving, I was able to help my mother and sponsored my secondary school education and diploma in Law. I wrote JAMB examinations three times and also sat for WAEC and NECO examinations for eight consecutive years from 2001 to 2008 before I was able to make credit in English Language.

How did you source money for the registrations?

Because I was determined to achieve my dream of becoming a lawyer, I had to sell all my belongings, including a copy of the Holy Quran that I inherited from my father. I also painstakingly went about my normal business as a water vendor. Interestingly, I got some help from one of my sisters and other well-meaning friends. So, I was able to survive the hardship before I could finish my diploma in Law from Bauchi State Polytechnic.

Were you into water vending even when you were in tertiary institution?

Yes, of course. It was because of the circumstances in which I found myself. I didn’t have anybody to sponsor my education. I had to do it because it was something I could do in the morning and make money before going for lectures or after closing in the evening.

Did you at any time feel shy of your school mates, especially the ladies?

No. I did not even hide the business from anybody. In fact, there was one of my course mates, a lady, whose father was my regular customer. Any time I entered their house with my cart, she used to turn her face as if she had never seen my face before. Whenever we met in the class later in the day, she would keep gossiping about me as if I was a beggar.

Did such attitude discourage you at any point?

No, I was never discouraged by anybody. That was due to my humility and the fact that I believed that I was nobody. I knew that I was only working to become somebody someday. I knew that the road isn’t smooth at all. I met many characters like her. Even, some of them were my relations who had concluded that I would never fulfill my ambition to become a lawyer because of my poor background. When I graduated from Bayero University, Kano, I also met many people who looked down on me because I sought their assistance to be able to secure registration fees for my admission into the Nigeria Law School. But I have forgiven them all.

Did you also sell water when you were in Bayero University?

No. I was selling lecture materials to my mates and other students in the Faculty of Law. There were some lecturers who understood my situation. So, they were assisting me with the materials which I used to photocopy and sell to be able to survive. Throughout my first year in Bayero University, I was sleeping in a mosque because I couldn’t afford the accommodation fee. Later on, I started squatting with some of my course mates.

Whenever the school was on break, I used to stay back in the school. That gave me the opportunity to register by proxy for students who were far away from Kano. They would send their registration numbers and fees to me, plus additional two or three thousand naira as an incentive to me. That was how I was making money to sponsor my studies at the university.

How was life at Law School Bwari, Abuja?

It was also tough because I failed the first attempt which was sponsored by some well-meaning Nigerians whose names I can not mention here. But the last one was sponsored by Mr Samuel Aruwan, the Kaduna State Commissioner for Internal Security and Home Affairs. Before I finally graduated I had slept in an uncompleted building and a mosque.

How do you feel now that you have fulfilled your dream of becoming a lawyer,?

First, I thank the Almighty Allah for giving me the wonderful opportunity to realize the dream. Secondly, I appreciate my mother for her support and understanding as well as many well-meaning friends and lecturers because without their support it wouldn’t have been possible.

So what is next now?

Well, the struggle has just started. I am now in a labour market. I thank God that I am a lawyer who studied Shari’a and Common Law. I am ready to give my best back to society.

Can you offer free counsel to the less privileged?

Yes, with all the hardships I have passed through in life, I think I will not be fair to myself if I fail to do that. At a point, when I said I wanted to become a lawyer, nobody believed in the dream except my mother who kept encouraging me. I said earlier, I had passed through many difficulties. That is the reasons I want to set up a foundation through which I would be able to offer free legal consultations to poor people.

What life lessons would you want the youth, especially those from poor backgrounds, to learn?

Obviously, my liFe is full of lessons to them. First, they should admit that poverty is not an excuse for someone to achieve his goal in life. Secondly, most youths of this generation are lazy and full of arrogance. These two evils are impediments to self resilience.