In Nigeria, Lady Justice Wears No Blindfold By Osmund Agbo 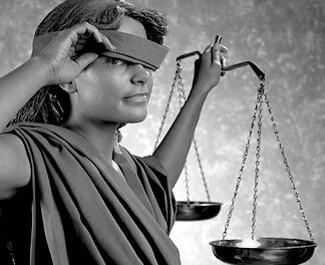 Friday, August 20 was unlike any regular day for the over four million residents of the Kano metropolitan area. More than 70 private airplanes invaded the ancient city’s airspace and jostled for space in the already crowded parking area at the Mallam Aminu Kano International Airport. It was the day politics met royalty, as two kids of immense privilege took the nuptial vows. The jury is still out but thus far, Yusuf Buhari and Zahra Ado Bayero’s wedding is undeniably Nigeria’s biggest royal event of 2021. Obi Cubana can feel good all he wants, with his festival of cows, but the Oba event was no match to the crème de la crème assemblage at Bichi.

The presidential delegation was led by Professor Ibrahim Gambari, the Chief of Staff to the President. Following were the Ministers of Defence, Bashir Magashi; Agriculture, Sabo Nanono; Aviation, Hadi Sirika, and other members of the Federal Executive Council. To make the 30-kilometre journey to Bichi upon arrival in Kano, the president was ferried across in a chopper.

As expected, the ceremony was a roll call of who is who in Nigeria; from past presidents to the top echelon of the country’s ruling class; from the business community to the members of the diplomatic corps. Mamman Daura, President Buhari’s uncle, stood in for the groom, while Aminu Dantata represented the bride’s family and accepted the N500,000 dowry payment. The Minister of Communication and Digital Economy, Dr Isa Ali Pantami was the officiating Imam.

Young friends of the couple, visiting from all over, many of whom are children of the rich and famous, however, did not let the religious piety that marked the ceremony observed earlier in the day ruin the thrill of their own Western-styled wild party later on. After all, rules made for the talakawas are not to be observed by these feral creatures.

A video of the wedding party showed the Nigerian singer, Mayorkun singing to the ecstatic crowd which responded in loud choruses. The music, for sure, was not a nasheed. Going by the look on the faces of those epicureans, one could have sworn that not all the kids in the party were cool with drinking just Coca-Cola and orange juice. Some were seen spotting trendy Mohawks and big Afros; anything but those hairstyles approved by the Kano State Hisbah.

Hisbah, modeled after the Saudi Arabia’s Commission for the Promotion of Virtue and the Prevention of Vice, is an Islamic doctrine that seeks to enforce community morals, based on the Quranic injunction to promote good and forbid wrong. Inadequate hijab covering, consumption of alcohol, public display of affection are some of the vices frowned upon and such infractions attract punishments.

Following public criticism for staying silent over the Yusuf/Zahra’s not-so-hisbah-friendly affair, the Kano State Hisbah Board responded by prohibiting the sharing of the bridal shower photographs, as if that would make the “sin” go away before Allah. Explaining why it treats the rich and the poor differently, while enforcing some of its rules, Aliyu Kibiya, one of the directors of the Hisbah Board, suggested that it is against the tenets of Islam to publicly criticise a leader. Oh really? That must be nice!

In February, Elija Ode, a barber from Benue State, was arrested by Kano Hisbah in the Sabon-gari area of the State for giving his customers haircuts considered offensive to the Islamic faith. He has since learnt his lessons the hard way and two of his customers now know the type of haircuts that are not approved.

Yusuf/Zahra’s wedding was a weekend of glitz that proved unstoppable, even by the scourge of a pandemic. It did not even matter that Nigeria is on Level 2 of COVID-19 regulations and that the maximum number of people allowed to congregate is 50. A similar party by a nobody would have attracted the attention of the “ubiquitous” officers of Nigeria Police Force, who will not fail to remind the person of the difficult time we are living in. The person would then happily submit to extortion, just to prevent being hauled into one of our nasty and God forbidden detention centres.

This piece is inspired, in part, by a video I watched recently, in which three young Nigerians (I refer to them as the Bobrisky boys) were stripped naked and beaten to a pulp by a mob, for having attended a party dressed as girls. The issue here is not about the morality or legality of what they did. It is about the fact that these young people were almost killed for an offence that the one who inspired them is being idolised. It’s akin to giving millions to terrorists in the name of amnesty, while condemning to death those who protested against the government. The issue of one country but two systems of justice, one for the poor and another for the rich, is a daily encounter in Nigeria.

It is true that former President Goodluck Jonathan, on January 7, 2014, signed the Same-Sex Marriage (Prohibition) Bill into law. The law, which criminalises lesbianism, transgender and all LGBTQ behaviours, attracts jail terms ranging from 10 to 14 years. But it’s not left for a mob to try, condemn and dispense justice. The same mob will probably cheer on Bobrisky and hit the like button on his Instagram posts.

Okuneye Idris Olanrewaju, nicknamed Bobrisky, is a very popular Nigerian crossdresser with a large social media following. It was a little bit of a shock to find that people in an overwhelmingly homophobic society like Nigeria are willing to pay money, in order to follow an individual who is an epitome of a lifestyle we all love to condemn. In fact, according to Google’s Communications and Public Affairs Manager for West Africa, Bobrisky was the most searched individual in Nigeria from October 26 to November 2016. But unlike the poor boys attacked by the mob, Bobrisky is rich and famous. His police escorts will likely beat to coma, anyone attempting to come even a mile close to him, let alone smell his cologne.

Lady Justice with her trademark blindfold is a personification of the moral force in judicial systems all over the world. Her blindfold represents the idea of impartiality in the nature of law and justice, be it for the rich or poor, man or woman, elder or child. She also has a scale in one hand with which to measure the strength of a case’s support and opposition, and a sword which represents authority, as well as conveys the idea that justice can be swift and final. Unfortunately, our nation continues to maintain an unsafe distance to Lady Justice, letting her realise in no uncertain terms that she does not belong here.

The problem is not about rich kids or anyone for that matter having fun, as long as it does not become an issue of public nuisance. The issue is in criminalising certain behaviours and enforcing the rules only when it involves the poor, while pretending to be deaf and dumb or even applauding when perpetuated by the rich and powerful.

Life has always been rigged against the poor in every society, but in Nigeria the odds are so heavily stacked that the idea of getting justice for our nation’s poor is a pipe dream. Little wonder why the primitive accumulation of wealth has become a national obsession. We hardly look back while grabbing whatever we can in the world, with no care about how such behaviour impacts others.

George Orwell might have had Nigeria in mind when he wrote his critically acclaimed satirical allegory in 1945. His Animal Farm is domiciled in our country where Lady Justice has a 20/20 vision.

Osmund Agbo, a public affairs analyst is the coordinator of African Center for Transparency and Convener of Save Nigeria Project.