Senator Garba Muhammed stated this in Abuja during the unveiling of the Agency’s remodelled communication platforms which included an ultra-modern call centre and the debut of its 627 short code that will enhance the prompt reportage of cases of human trafficking anywhere across the world. 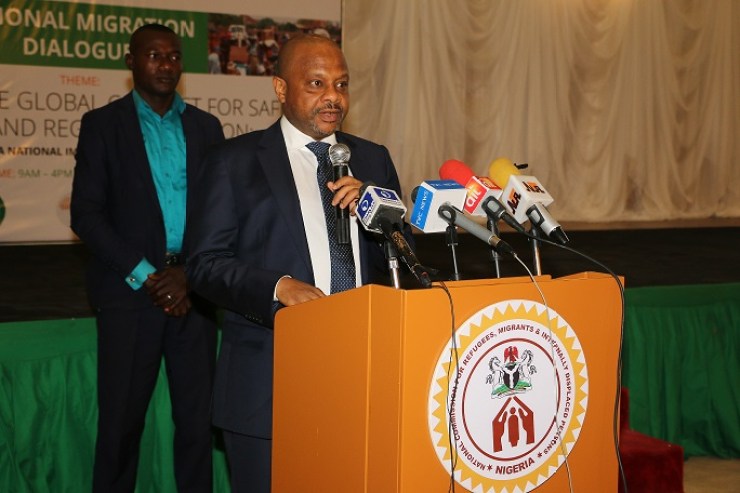 Director General of the National Agency for the Prohibition of Trafficking in Persons (NAPTIP), Senator Basheer Garba Muhammed, has described human trafficking as a deadly crime that is capable of truncating the future of any nation due to its spiral effects on not only the victims, but the entire family.

He disclosed that the agency has commenced acquisition of modern equipment and upgrading of the existing operational strategies coupled with enhanced capacity building for its operatives for the purpose of fishing out trafficking barons and their accomplices no matter their hideout within and outside the country.

He therefore called on members of the National Assembly, State Governors, development partners and other stakeholders to join hands with the agency for improved advocacy and support.

Senator Garba Muhammed stated this in Abuja during the unveiling of the Agency’s remodelled communication platforms which included an ultra-modern call centre and the debut of its 627 short code that will enhance the prompt reportage of cases of human trafficking anywhere across the world.

The project was sponsored by the Expertise France with the funding from the European Union.

Expertise France is one of the partners that support authorities and civil society in six countries in the fight against human trafficking through improved institutional and operational capacities, law enforcement, victim protection and regional cooperation. The project aims to support the authorities and civil society in six Gulf of Guinea countries (Guinea, Ivory Coast, Ghana, Togo, Benin and Nigeria) in tackling human trafficking.

Speaking shortly before commissioning the projects, Senator Garba Muhammed expressed displeasure over the huge statistics and frightening data of the prevalence of human trafficking across the country.

He said, “Human trafficking is one of the deadliest crimes that is affecting many families across the country and yet under-reported. The statistics and data on the prevalence of this phenomenon even in the Northern parts of the Country, makes me sad. Therefore, there is the need for full cooperation and support of the whole nation.

“This is why I commend our partners, Expertise France for sponsoring this huge project. They have done the fundamentals with the donation of the state –of – the art call centre which comes with the Customer Relations management facilities, multiple call platform, call back devices and others supporting channels.

“Worthy of commendation is the 627 toll free short code aimed at enhancing swift reportage of cases of human trafficking and other associated crimes. With the latest development, human traffickers are in for big trouble because we shall continue to blow up their cover, arrest and prosecute them.

“We shall do everything possible to ensure that 627 short code is in the heart of all Nigerians so that when confronted with any trafficking situation, they can call the toll free line and help will swiftly come their way”, the NAPTIP Director General said.

In their separate speeches, representative of European Union Delegation, Eleni Zerzelidou and Project Manager of Expertise France Nigeria,  Abimbola Adewumi, promised to continue to support the agency in order to tackle the menace of human trafficking in the country.

Adewumi listed some of the assistance to NAPTIP to include building capacity of critical stakeholders to combat human trafficking, support for the setting up and training of members of State Task Force on Human Trafficking in Ondo and Ekiti states, Provision of high –tech investigation and profiling modern devices in addition to advocacy and sensitization sponsored by the Organization.

Highpoint of the programme was the official commissioning of the facility by the NAPTIP Director General and Representative of the EU Delegation as well as the Project Manager, Expertise France Nigeria.