How And When Kyari Can Be Lawfully Extradited (1) By Aare Afe Babalola, SAN

An appraisal of the extradition law and treaty: The Extradition Act cap E25, Laws of the Federation of Nigeria, 2010 generally makes provisions relating to the extradition of persons wanted in a foreign nation for criminal prosecution. 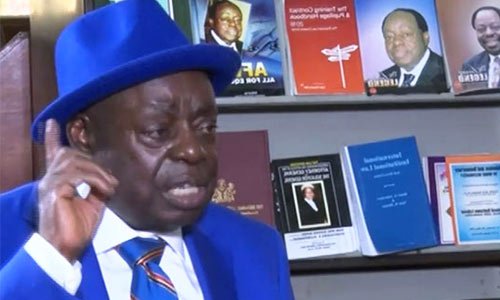 The Nigerian news media was recently abuzz with the news of a criminal charge of an allegation of conspiracy to commit wire fraud and conspiracy to engage in money laundering levied by the US Federal Bureau of Investigation, FBI, in a United States District Court against Mr Ramoni Abass (popularly known as Hushpuppi) and others, including Nigeria’s highly celebrated police officer, DCP Abba Kyari.

According to the charge, Kyari arranged the arrest of one Chibuzo at the request of Hushpuppi to prevent Chibuzo from interfering in the scheme defrauding a victim of over €820571.00. Further, in the detailed charge, Kyari allegedly held Chibuzo in custody for a month in order to prevent him from notifying the alleged victim of the impending fraud, and therefore, Kyari’s knowing involvement in the scheme allegedly allowed Hushpuppi to continue defrauding the victim undetected.

An appraisal of the extradition law and treaty: The Extradition Act cap E25, Laws of the Federation of Nigeria, 2010 generally makes provisions relating to the extradition of persons wanted in a foreign nation for criminal prosecution. Section 1(1) of the Act provides:

Where a treaty or other agreement (in this Act referred to as an extradition agreement) has been made by Nigeria with any other country for the surrender, by each country to the other, of persons wanted for prosecution or punishment, the President may by order published in the Federal Gazette apply this Act to that country

By the above provision, there has to be in existence an extradition agreement or treaty between Nigeria and the foreign country for the provisions of the Extradition Act to apply. However, by Section 6 of the Act, an extradition request must be made in writing to the Attorney-General of the Federation by a diplomatic representative or consular officer of the country seeking the extradition, accompanied by a duly authenticated warrant of arrest.

While the Act generally grants the Attorney-General the discretion to refuse to make an order for extradition, but particularly, shall refuse to extradite in the following cases, i.e.:

If the extradition is being sought to be made for the purpose of prosecuting or punishing a person on account of his race, religion, nationality or political opinions or was otherwise not made in good faith or in the interest of justice

That if surrendered, the person is likely to be prejudiced at his trial, or to be punished, detained or restricted in his personal liberty, by reason of his race, religion, nationality or political opinions.

If the nature of his offence is considered trivial

If having regard to all the circumstances in which the offence was committed, it will be unjust or oppressive or be too severe a punishment, to surrender the offender.

If the fugitive criminal has been charged with an offence under the law of Nigeria or any part thereof, not being the offence for which his surrender is sought; or is serving a sentence imposed in respect of any such offence by a court in Nigeria, he shall not be surrendered until such a time as he has been discharged whether by acquittal or on the expiration of his sentence.

If the Attorney-General is not satisfied that the fugitive will not be detained or tried in that country for any offence committed before his surrender other than the extradition offence.

In addition, the Act empowers a magistrate, consequent upon an order received from the Attorney-General of the Federation, to issue a warrant of arrest of a fugitive criminal, executable anywhere in Nigeria.

Having earlier stated that there must be an extradition agreement with such a foreign country in order for the provisions of the Extradition Act to apply, it is important to consider the bilateral extradition regime between Nigeria and the United States of America.

At Nigeria’s independence in 1960, the treaty became applicable as was the case with all laws inherited from the United Kingdom. Since then, the extradition treaty became part of the nation’s legal system. This treaty, however, became validated by the provisions of Section 1 of the Extradition Act.

Article 1 of the Extradition Treaty provides that ‘contracting Parties engage to deliver up to each other, under certain circumstances and conditions stated in the present Treaty, those persons who, being accused or convicted of any of the crimes or offences enumerated in Article 3, committed within the jurisdiction of the one Party, shall be found within the territory of the other Party.’

The crimes to which the Treaty may apply were listed under Article 3. It includes the offence of “obtaining money, valuable security, or goods, by false pretences; receiving any money, valuable security, or other property, knowing the same to have been stolen or unlawfully obtained”. It is on the strength of this provision that the government of the United States of America has, through its Federal Bureau of Investigation, obtained an order of Court for the arrest and extradition of DCP Abba Kyari from Nigeria to stand trial for the crimes of conspiracy to commit wire fraud and conspiracy to engage in money laundering.

It is, however, important to note that the provisions of the Treaty on the prohibition of extradition are similar to those under the Extradition Act. The Treaty prohibits the extradition of persons already tried and convicted or discharged, or still standing trial, for the offence for which his extradition is demanded. Also, there shall be no extradition if there had been a lapse of time, or if the offence is one of a political character.

The Abba Kyari case: Operatives of the Federal Bureau of Investigation reportedly met with the Inspector General of Police to discuss the allegations against DCP Kyari and to demand his arrest and extradition to the USA. Consequent upon this meeting, the Police Service Commission, PSC, based on the recommendation of the IGP, suspended DCP Kyari from office as a Deputy Commissioner of Police and head of the Intelligence Response Team, IRT.

However, it is clear from the afore-referenced provisions that an application for extradition can only be made to the Attorney-General of the Federation, and upon receipt of such application, he must first consider whether the fugitive is precluded by any of the exceptions identified above.

The law equally grants the AGF a measure of discretion in refusing an application for extradition, subject to the terms of the extradition treaty, and where he exercises his discretion to refuse, there exists no other legal recourse for the requesting country to extradite the fugitive.