Nigerian social media users keenly followed the deluge of stories of the alleged activities of the defendants after they were indicted on criminal charges. 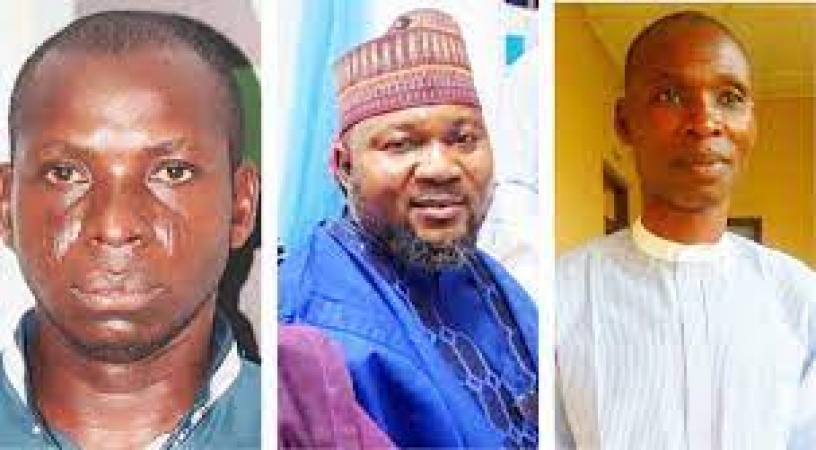 The delayed conclusion of some of the most ‘celebrated’ criminal cases in the country has raised concerns among relatives of victims and observers.

Five of these cases are those of Chukwudubem Onwuamadike, popularly known as Evans; Hamisu Bala, also known as Wadume; Abdulmuminu Danga, a commissioner in Kogi State, who allegedly assaulted a young woman; Andrew Ogbuja, who was charged with the violation and murder of young Ochanya Ogbanje; while a former Secretary to the Government of the Federation, Babachir Lawal, was charged for alleged corruption.

Nigerian social media users keenly followed the deluge of stories of the alleged activities of the defendants after they were indicted on criminal charges.

The expectation of the public was that the cases would be speedily concluded to help resolve the several allegations of criminality and the perception of slowness or the absence of justice in the country.

Analysts have submitted that despite these cases enjoying rave reviews in the media and public space, several factors could account for their delay, some since 2017.

Among the identified challenges are the usual technical problems in the Nigerian judiciary, some occasioned by lawyers, the  COVID-19 pandemic, #EndSARS protest and strike by the Judicial Staff Union of Nigeria (JUSUN).

Five of the most ‘celebrated’ cases are those of Chukwudubem Onwuamadike, popularly known as Evans; Hamisu Bala, also known as Wadume; Abdulmuminu Danga; Andrew Ogbuja, who was charged with the violation and murder of Ochanya Ogbanje, while a former Secretary to the Government of the Federation, Babachir Lawal, was charged for alleged corruption.

Analysts have submitted that the cases, which enjoyed rave reviews in the media and public space, had lasted for an average of four years due to the usual technical problems in the Nigerian judiciary, the COVID-19 pandemic, #EndSARS protest and strike by the Judicial Staff Union of Nigeria (JUSUN).

Evans
Despite the uproar in 2017 by the arrest and prosecution of a kidnap kingpin, Evans, the case has not been concluded in 2021.

Evans, popularly referred to as the ‘Billionaire Kidnapper,’ was arraigned in two judicial divisions of the Lagos State High Court, one in Ikeja and another in Igbosere, over a series of alleged kidnap, murder and attempted murder charges.

Others charged alongside Evans are Uche Amadi, Ogechi Uchechukwu, Chilaka Ifeanyi, Okwuchukwu Nwachukwu and Victor Aduba. They are facing trial over the kidnap of the chief executive officer of Maydon Pharmaceutical Limited, Donatus Dunu, in 2017.

Although like other cases, the COVID-19 pandemic dealt a serious delay on the case in 2020, on August, rumours made the rounds that Evans had been sentenced to death by

hanging following his confession for the several alleged offences against him. But findings revealed that he had not been convicted and sentenced as reported; rather, what transpired was that his application of no-case-submission, alongside five of his co-defendants, which sought the quash of the charges against him, was refused by Justice Hakeem Oshodi of the Lagos High Court in Ikeja.

Sources said the burning of court properties, including files and exhibits during the #EndSARS protests greatly affected Evans case, which meant that the trials would have to resume afresh, with the prosecution supplying fresh copies of documents.

The case came up at the Lagos High Court in Ikeja in June but was stalled due to the absence of a defence witness, who his counsel, Oyekunle Falabi, informed the court, could no longer be reached on phone.

This is even as Evans had earlier testified that his nickname was not ‘Evans’ and that he was not a kidnapper but a legitimate businessman who was coerced to admit wrongdoing.

The case is expected to resume after court vacation in September.

Wadume
Wadume is facing trial before a Federal High Court in Abuja on a 13-count charge on allegations of terrorism and kidnapping in Taraba State.

Before the JUSUN strike which stalled his trial, Wadume was expected to open his defence on May 8 after the prosecution concluded its case in March with six witnesses.

The police alleged that soldiers helped set him free after he was arrested by a team of police officers from Abuja, who were conveying him to Ibi in Jalingo on August 6, 2019, which led to the death of three police officers and two civilians.

The case has been faced with controversy after the military officers indicted in the attack of the police personnel were separated from the trial of the other defendants.

After the removal of the names of the 10 soldiers indicted in the offences in June 2020, federal government’s prosecuting counsel, Magaji Labaran brought in an amended 13-count charges against the remaining civilian defendants.

The controversy forced the Attorney-General of the Federation and Minister of Justice, Abubakar Malami to stress that military authorities would conduct the trial of the officer in accordance with “existing institutional legal framework” while assuring that justice would be done in the matter.

Malami explained that the names of the soldiers were removed to protect the fundamental human rights of the other defendants in the matter, pending when they are brought by the appropriate authority – the military.

The six witnesses who testified in the trial narrated how six rifles were allegedly recovered from Wadume and his men.

As the federal government has concluded its case, the court has fixed November 4 for the defendants to open their defence.

A defence counsel in the matter, Mohammed Tola said: “We are ready for the matter; it will be for definite defence.”

Ogbuja
The rape and murder trial of two men, who were guardians of a 13-year-old Ochanya Ogbanje at a Federal High Court in Makurdi, Benue State, has suffered set back, with the last hearing in June 2020.

There was public outrage in October 2018 after Mr Andrew Ogbuja and his son, Victor (at large), allegedly severally molested Ochanya, leading to her death on October 17, 2018, due to complications from the act.

Ogbuja was a senior lecturer in the Department of Catering and Hotel Management, Benue State Polytechnic, Ugbokolo, while his son, Victor, who is now at large, was a final year student at the Federal University of Agriculture, Makurdi.

His wife, Felicia, 43, was equally arraigned by the National Agency for the Prohibition of Trafficking in Persons (NAPTIP) on a two-count charge bordering on sexual exploitation and negligence over Ochanya’s death.

The defendants had entered a no-case-submission in the trial in 2020, but it was refused by Justice M. O. Olajunwo, who maintained that the prosecution had led substantial evidence to warrant the defendant to enter her defence.

The matter would have proceeded with defence but for the various incidents which affected the courts in Nigeria.

Danga
The end result of the case of assault of a girl identified as Elizabeth and the Commissioner for Water Resources in Kogi State, Abdulmumini Danga, has gone cold without needed information despite the wild attention and condemnation it elicited.

It was reported that the lady had requested the commissioner’s financial assistance for her sister on Facebook, which allegedly led to her abduction and torture.

It was also reliably learnt that the commissioner was invited by the police for questioning during the heat of the case, which details were not made known to the public.

A source told our correspondent that the case was referred to a High Court in Abuja, where the commissioner was granted bail.

Not satisfied, some non-governmental organisations in Kogi State questioned the merit of the bail in a case that is ordinarily not bailable.

Babachir Lawal
The former Secretary to the Government of the Federation, Babachir Lawal, was enmeshed in a N544 million grass-cutting contract awarded to a company linked to him, Rholavision Engineering Ltd and Josmon Technologies Ltd, by the Presidential Initiative for the North-East (PINE).

He was arraigned on 10-count charges in February 2019 before a Federal Capital Territory (FCT) High Court over the deal. He was re-arraigned on November 30, 2020 before Justice Charles Agbaza following the death of the former presiding judge in the matter, Justice Jude Okeke.

Others charged with him for the fresh trial include his younger brother, Hamidu Lawal, Suleiman Abubakar, Apeh Monday and the two companies.

The speedy conclusion of the matter was believed to have been affected by several other incidents that hit the judiciary in recent times.

Lawal’s trial was adjourned on June 24 after the court rejected the forensic report tendered by the Economic and Financial Crimes Commission (EFCC).

The defence lawyer had objected to the document on the grounds that the computer-generated evidence violated the provisions of the Evidence Act, 2004.

The case is expected to resume in October.

Many factors responsible for the delays – Lawyers

Reacting to the cause of the delays in criminal cases in the country, Sunusi Musa, a lawyer, said the Administration of Criminal Justice Act (ACJA) in Nigeria had provided for the hearing of criminal cases on a daily basis and to conclude them speedily, but each individual case may have different reasons for their delays.

Also reacting, Hameed Ajibola Jimoh said the congestion in the courts caused by inadequate number of judges was a contributory factor to the delays in cases.

“We have had several cases of courts being shut down by COVID-19, #EndSARS, even this JUSUN strike. So 2020 contributed because there were no court proceedings for almost the whole year because of social distancing,” he said.

He also identified the impracticability of the full adherence to the ACJA, the delays in calling witnesses and the evidence and frivolous delay applications by the defence, who may feel he/she is guilty.

“You would observe that a defendant who is innocent would feel pained and would be interested in quick justice, but when a defendant is guilty and looking at the activities for which he or she is being charged, he will not want the case to go ahead,” he added.

Also, Lillian Okenwa said delays may be caused by either the nature of the case or antics of lawyers, resulting in undue adjournments.

“Sometimes there are some inadvertencies and emergencies. I appeared in a matter for 22 times and no lawyer appeared on the other side. I kept serving the defendant, and eventually, when a lawyer appeared, he started playing all kinds of tricks until the court had to pin them down and the trial started. There is no clear-cut reason for such delays, if you ask me,” she said.