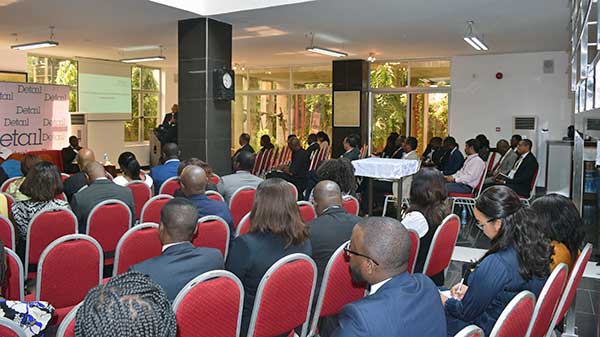 Women in the legal profession have been advised to be intentional and focused while striking a balance between their jobs and career.This was stated during the official launch of Women In The Profession organised by a law firm, Details Solicitors, which took place in the Lekki Area of Lagos State, with speakers joining via Zoom.

WIP, a brainchild of the New York City Bar, is aimed at promoting diversity in the legal profession. In recent years, WIP has encouraged the establishment of WIP chapters in Latin America and across Sub-Saharan Africa, including Nigeria.

The keynote speaker at the event, Felicia Djibo, Partner and Consulting at Deloitte, while presenting the results from a survey on the theme, “Why Women Leave Law,” said statistics have shown that while women enter the profession in equal numbers to men, a high level of attrition occurs mostly before or at the mid-level stage of the women’s careers.

According to her, in the survey conducted in April 2022 by Deloitte, 128 women were lawyers and 62.5% of the survey said the women were not being promoted as men.

She said, “Lack of work-life balance are the reasons women ascend slower in the legal profession and employers’ insensitivity.

“Also in the survey, 56% said there should be active policies, implement policies that increase sensitisation and increase the inclusiveness of gender balance.

A panellist at the event, Kofo Dosekun, the chairman of Aluko and Oyebode law firm, said she worked at CitiBank for six years in the legal department and after six years she realised that she wasn’t being promoted like her other colleagues.

Dosekun said due to the training she had in different areas of the banking sector; she was able to move to another department in corporate finance and industry.

Another panellist Michelle Thompson, CEO, Resistant Vision Coaching & Consulting, said that women need to be more focused and their conversation should change.

Derin Adefulu, Executive Head, Governance at Old Mutual Nigeria, said women should be intentional and must nurture their careers because that is what they can control if they have a career plan.

She said, “ You have to be intentional, no matter how hard you work, if your work is not seen, it’s as if you are not working so I think that one needs to manage a balance between working hard and being able to show your stakeholders who are the ones that will determine, for example, your promotion and your appraisals that you are working hard.

“Nurture your career and have the right to opportunities so that people will know that you are there. But if you are not making use of the opportunity, you are just working and working.

“I think there is a lot that needs to be joggled by any person in the public career in terms of your hard work, your work being seen, the opportunity and getting the right balance so you are promoting yourself but at the same time, you are working hard. I will say ensure that you manage not just your job, but also your career,” she said.

A participant at the event, Mrs Sotonye Amachree, who is a Senior Associate from the law firm of Ajumogobia and Okeke in Lagos, said that the inaugural meeting of WIP was very insightful.

“So I believe that these are policies that are realistic for instance talking about maternity leave provisions for women who have had children such that they are allowed to have an extended maternity fixed period as opposed to what we currently have in Nigeria for most organisations it is between three months to four months but there is a proposal here that we want to look at how we can extend those maternity leave periods to six months which I believe it’s a very good initiative.

“Personally, when I was having my children, though it was three months, I had to ask for an extension of three more months making mine six months and that is because my organisation had a human face.

“So I believe that my organization doesn’t have that problem because the management was quite considerate when I was having all my children, which is amazing because I had six months, for each child and I appreciate my organisation for that so if a lot of organisations can do the same, to support their women, I believe, it will go a very long way.”