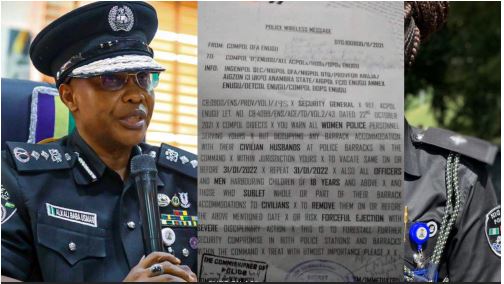 A large number of married policewomen and others married to civilians living in different barracks in Enugu State are on the verge of being homeless following an order by the police authorities directing them to vacate the facilities.

The signal originated from the Department of Finance and Administration in Enugu State and was addressed to all Assistant Commissioners of Police, Heads of Department and Divisional Police Officers in the state.

The document read, “YOU WARN ALL WOMEN POLICE PERSONNEL SERVING WITH THEIR CIVILIAN HUSBANDS AT POLICE BARRACKS IN THE COMMAND X WITHIN JURISDICTION YOURS X TO VACATE SAME ON OR BEFORE 31/01/2022 X REPEAT 31/01/2022.“

The police authorities said the move was to forestall security compromise in all stations and barracks within the command.

The document also asked those who sublet whole or part of their barrack accommodations to civilians to eject them or face disciplinary action. 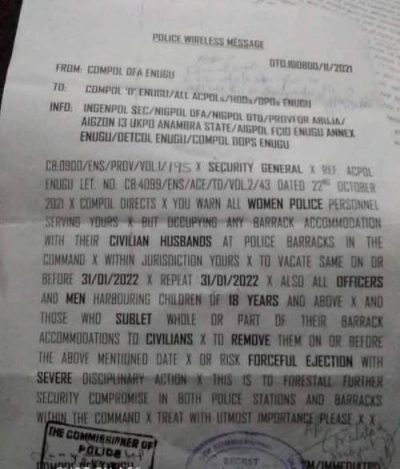 One of the affected female officers, who spoke to SaharaReporters on condition of anonymity for fear of being sanctioned said she was shocked by the directive.

“Evicting women police from the barracks just because they are married to civilians is insane and the shameful. They should have same rights and opportunities like their male colleagues.

“Gender inequality like this will affect the women psychologically and make them feel worthless just because of their choice of marriage,” she said.