The 33-page document applies in the Federal capital Territory (FCT), Abuja, but it would have to be adopted across the rest of Nigeria’s states as part of their own laws through their state legislature and government. 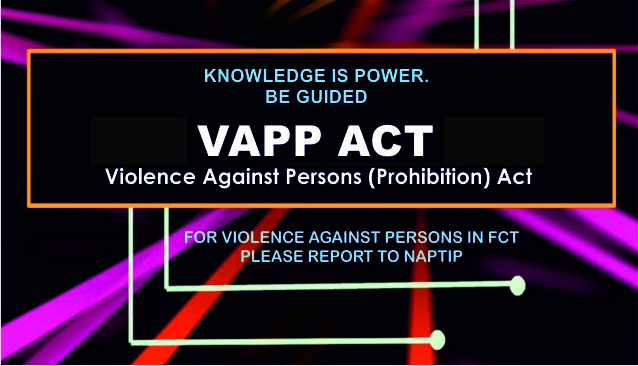 Nigeria is one of the least safe places for women in the world and the Violence Against Persons (Prohibition) Act, also known as the VAPP law, is a very important legal tool that can help make the country much safer for women and girls.

The VAPP law is designed to tackle “all forms of violence against persons in private and public life” and provide “maximum protection and effective remedies for victims and punishment of offenders.”

The 33-page document applies in the Federal capital Territory (FCT), Abuja, but it would have to be adopted across the rest of Nigeria’s states as part of their own laws through their state legislature and government. This is the only way it can be useful to every Nigerian woman and girl and why it is important for Nigeria’s leaders to enforce the VAPP law in all states.

It was signed into law by former president Goodluck Jonathan in 2015 and has so far been adopted in varying forms by 18 of Nigeria’s 36 states.

What does it work to achieve?

The VAPP law covers various forms of violence but particularly hones in on gender and sexual-based violence. It also redefines rape and is the first Nigerian law to recognize that rape can involve male victims.

Because Nigeria is home to many cultural practices that are particularly harmful to women and girls such as Female Genital Mutilation (FGM) and circumcision, denial of inheritance and succession rights, and forced marriage, the VAPP law aims to provide a legal framework that protects the victims of these practices.

“No matter where you are in Nigeria, in the north or south, in the city or rural, Christian or Muslim, every woman and girl is at risk of rape. Nowhere is safe or immune to this violent crime against women,” Amnesty International’s Osai Ojigho said to CNN in June 2020.

Furthermore, the VAPP law focuses on globally acceptable deterrents in the form of punishments for offenders and also includes provisions for the financial compensation of victims — another first. It also categorizes emotional, verbal and psychological abuse as offences.

Ultimately, the VAPP law’s purpose is to reduce the equality gap between men and women in Nigeria as well as cut down the country’s very high incidence of GBV which disproportionately affects women and girls.

3 Facts You Should Know About VAPP Law in Nigeria

Why is that important?

The VAPP law is very important for many reasons, chief of which is the gap in constitutional and protective rights for women in Nigeria. Furthermore, the COVID-19 pandemic has caused a three-fold spike in the number of reported cases in Lagos, Ogun and Abuja.

According to the United Nations Population Fund (UNFPA), 3 in 10 Nigerian girls have experienced physical violence by the age of 15 and a Thomson Reuters Foundation survey from 2018 ranked Nigeria the ninth most dangerous country for women.

Just in May, Uwaila Omozuwa, a 22-year-old microbiology student, was brutally raped and killed in a church in Benin City. Due to the COVID-19 lockdown her school had been closed, so to avoid distractions at home, she had gone to church more frequently to read. A guard who resumed duty one night had found her lifeless on the floor.

Figures from the United Nations Children’s Fund (UNICEF) show that 1 in 4 girls and 10% of boys have been victims of sexual violence. Fewer than 5% of those who have reported cases of violence have received any kind of support, the organization says.

Another reason why the VAPP law is important is Nigeria’s extremely low conviction rates for sexual violence crimes.

Although poor records-keeping makes it literally impossible to say exactly how many rape convictions there has been in Nigeria, the International Centre for Investigative Journalism (ICIR) only found 65 rape convictions from publicly available information between 1973 and 2019.

“I think the VAPP Act is a more comprehensive law. It is a benchmark law for offences such as rape. It covers almost everything,” Rhoda Prevail Tyoden, national president for the International Federation of Women Lawyers (FIDA) Nigeria, told Daily Trust in 2020. “We are getting there.”

There are many people and organizations involved in the passage, signing and domestication of the VAPP law across Nigeria.

From government officials and policy makers to activists and non-profit advocacy organisations like Global Citizen partners Stand To End Rape Initiative (STER) and Women At Risk International Foundation (WARIF), it has truly been a collective effort to first get the law passed at the federal level and work is still ongoing to domesticate the VAPP law beyond the 18 states that have adopted it so far.

How does it work?

Although the VAPP law was only applicable in the FCT in the form it was passed, it also allows for states to domesticate the law and prescribes minimum sentences for the crimes it tackles.

It also makes a provision for the creation of a sex offenders register which has already been created by the National Agency for the Prohibition of Trafficking in Persons (NAPTIP) which is also empowered by the law to enforce its provisions.

What has it achieved so far?

So far, 16 states have passed the VAPP law while Lagos and Ekiti states previously had Protection Against Domestic Violence Law and Gender-Based Violence Prohibition Law respectively — enforceable only within those states— with some of the provisions of those laws making it into the VAPP law.

This means more Nigerians than ever before now have access to support and protections against GBV and other forms of violence in the law. Nigerians have already benefited from the law in various ways and in 2018, NAPTIP said it had secured 38 convictions.

What’s it hoping to achieve next?

Nationwide coverage and enforcement of the VAPP law is the next stage — there are still 18 states that are yet to sign it into law. Of these states, seven (Bayelsa. Osun, Plateau, Rivers, Kogi, Imo, Adamawa) are awaiting the governor’s signature for it to become law.

“[Also,] we are in the patriarchal system where males believe that they have the final say and the women should not say anything and because of that a number of women have suffered in silence and sexual-based violence has continued. Mostly religious beliefs, traditional and cultural beliefs are some of the things that keep on stopping the laws from being adopted,” she added.

How can Global Citizens help?

Nigerian women and girls would be protected from all forms of violence and abuse, survivors would be entitled to legal, health, and social services, and perpetrators would be punished to the fullest extent if Nigerian leaders commit to enforcing the VAPP law across all states.

You can take action by calling on Nigeria’s leaders to commit to safeguarding the lives of women and girls, by approving and enforcing the VAPP law here.

NEWER POSTKaduna And Electronic Voting: Lessons For Nigeria By Reuben Abati
OLDER POSTImpunity Within The Arms And Tiers Of Government By Ebun Olu Adegboruwa, SAN