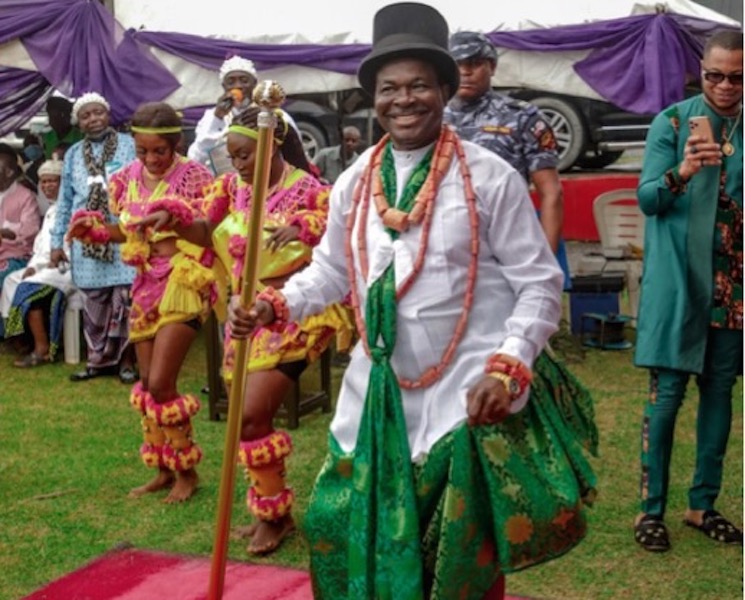 Against the backdrop of his phenomenal achievements and commitment to the protection of human rights in Nigeria, the leading constitutional lawyer, Chief Mike Ozekhome (SAN), was last week honoured with the chieftaincy title ‘Ada Idaha Ke Efik Eburukutu Kingdom’, meaning pillar of strength of Efik Kingdom, by the Obong of Calabar, His Eminence, Edidem Ekpo Okon Abasi Otu V. Yinka Olatunbosun pays a tribute to the flag-bearing lawyer.

The colourful ceremony had all the picturesque setting of a typical Efik traditional royal party and for a split second, one could forget that Chief Mike Ozekhome (SAN) actually hails from Edo State. Clad in the full regalia of an Efik Chief with a defining bowler hat, he swayed to the beat in that breathtaking atmosphere of festivity.

Ekombi dancers captured the audience with their energetic performance; arousing applause and picture-perfect moments at the ceremony. It came as no surprise; Ozekhome is a man worthy of celebration. As the first senior advocate to emerge from Edo, he was a stalwart member of the Gani Fawehinmi Chambers. To date, his voice is a constant reminder of the burning fire of activism in the late Chief Gani Fawehinmi.

Flashback to his younger days, activism ran through his veins with the precision of intravenous fluid. Born and raised by parents who loved education, Ozekhome attended St. Mary’s Catholic Primary School, Iviukwe, and St. Peter’s College, Agenebode, where he achieved the best graduating results in 1969 and 1974, respectively. He proceeded to Baptist Academy, Lagos, in 1975 and gained admission to the University of Ife — now Obafemi Awolowo University — Ile-Ife, to study English and subsequently lost a year in order to switch to the Faculty of Law where he graduated in 1980.

His university externship was with the fiery Peoples Lawyer, late Kanmi Isola-Osobu; while his NYSC was with the Federal Ministry of Justice, Yola, and later, Lagos, wherefrom he was seconded to the then National Provident Fund, Lagos (now known as Nigeria Social Insurance Trust Fund).

By 1982, Ozekhome returned to Ife to pursue his Master’s degree programme in Law. He lectured at the same faculty and today, many of his students are Judges, Justices of Appellate courts, Senior Advocates of Nigeria, top entrepreneurs, Diplomats, Captains of Industry, top military brass and Professors. He later joined the ever-busy and pro-masses chambers of the late Chief Gani Fawehinmi, where he worked, first, as a junior counsel, later as a senior counsel; and finally rose to the highest position of Deputy Head of Chambers by 1985. In 2017, Ozekhome bagged his PhD (by Thesis) from Alliance International University, Lusaka, Zambia.

Ozekhome has a way with words; his profound oratorical skills strike the right chord when he speaks. His deep erudition, incisive dissemination of ideas and strongly held opinions are a beauty to behold. Arguing with him is more fun than watching a reality show.

As a lawyer who certainly knows what he is doing in his chosen field, it is now becoming a delight to see many litigants choose Ozekhome as their lawyer whenever they need one. To them, he is always reliable and does not disappoint.

A strong advocate of good governance, Ozekhome is one activist that cannot be silenced as his voice is constantly heard challenging obnoxious policies of the government to the delight of the masses.

The legal icon with roots from Iviukwe town, near Agenebode in Etsako East Local Government Area of Edo, was weaned on the values and traditions of nobility, character and integrity that humanity can bestow – honesty, humility, a good conscience, fear of God, hard work, selflessness, service to humanity, and courage.

With numerous epochal cases that have helped to define and shape the legal regime and Nigerian legal jurisprudence, Ozekhome was a contributor to the favourable climate that restored democracy, while fighting for good governance and the rule of law to be upheld.

In 1986, he founded the law firm- Mike Ozekhome’s Chambers, with thriving offices in Lagos, Abuja, Benin City and his hometown, Agenebode. His law firms handle many cases of human rights pro bono. Ozekhome uses the law as an instrument of social, political and economic engineering; handling many landmark cases that help redefine Nigerian laws and jurisprudence in all the appellate courts of Nigeria.

In 1987, Ozekhome co-founded the Civil Liberties Organisation (CLO), the first human rights organisation in Nigeria and was named as the pioneer Director of Legal Services and member of its Governing Board. In 1998, he co-founded the Joint Action Committee of Nigeria (JACON), with the late Chief Gani Fawehinmi, who was chairman. Ozekhome was the National Vice Chairman, publicity and publications. He had, earlier in 1992, solely founded the Universal Defenders of Democracy (UDD), an international human rights and pro-democracy league. He also founded the Democratic Rights Agenda (DRA) and Peace Initiative (PI), a peacebuilding and conflict resolution centre. As a result of his relentless pursuit of justice, Ozekhome was frequently detained several times during the days of military rule, starting from 1986, on account of his human rights and pro-democracy activities, especially during despotic and repressive military juntas.

In 1990, Ozekhome was glowingly acknowledged by the Lawyers Committee For Human Rights, New York, in its 1989 and 1990 Annual Reports: “In Defence of Rights: Attacks On Lawyers and Judges”, as one victim of human rights abuses, in Nigeria.

Ozekhome later founded Mike Ozekhome Foundation (MOF), a wholly philanthropic and charitable organization, committed to helping the youth, widows, the poor, vulnerable and down-trodden. A consummate author who has written many law books and numerous national discourse books, he has attracted to himself numerous traditional and honorary chieftaincy titles such as Akpakpa Vighi Vighi of Edo Land (Generalissimo and Commander of the traditional Armed Forces of Edo land). This is a title that was jointly conferred on him at Ekpoma, Edo State, on March 2, 2002, by all the 72 traditional rulers of Edo State, a feat never before achieved by any person.

His office is like a hall of fame, parading plaques that he had received. He boasts of over 300 awards and honours, both local and international. He holds seven honorary Doctorate Degrees (honoris causa) in addition to his PhD by thesis from Lusaka, Zambia. These include Doctor of Laws (LL.D), Doctor of Letters (D.Litt), Doctor of Administration (DA), Doctor of Jurisprudence (JD), Doctor of Letters (HonDL), Doctor of Philosophy (PhD), Doctor Arts (D.Arts), etc, from various universities in USA, United Kingdom, Europe, Israel, Nigeria and Belize.

Dr Ozekhome is Counsel at the International Criminal Court, at The Hague, in The Netherland of 2000 Outstanding Intellectuals of the 21st Century; UN Eminent Peace Ambassador; Ambassador for Peace,
Ozekhome is a fellow of the Chartered Institute of Arbitration (FCIArb), fellow, Academy of Entrepreneurial Studies (F.AES), fellow, National Institute for Education and Research (FNIER), fellow, Nigerian Institute of Management (FNIM), Institute of Chartered Mediators and Conciliators (F.chMC), amongst others.

The generalissimo has over the years spoken truth to authority, challenged dictatorial anti-people decisions of any government in power and insisted that the primary purpose of government which is security and welfare of the people cannot be compromised on the altar of fear, intimidation, sentiments and sheer emotion. An anti-corruption Czar who first propounded the theory that corruption is the 37th State of Nigeria, Ozekhome has been outspoken on impunity, freedoms and liberties of the citizens. His crusades go beyond answering the questions; he questions the answers. In discussing national issues with uncommon passion, Ozekhome leaves no stone unturned.

He is a symbol of total embodiment and commitment to excellence in the act of public administration and management. He has continued to inspire and energize present and future generations by epitomizing outstanding management excellence, efficiency, transparency, prudence and selfless services in different capacities where he has served meritoriously.