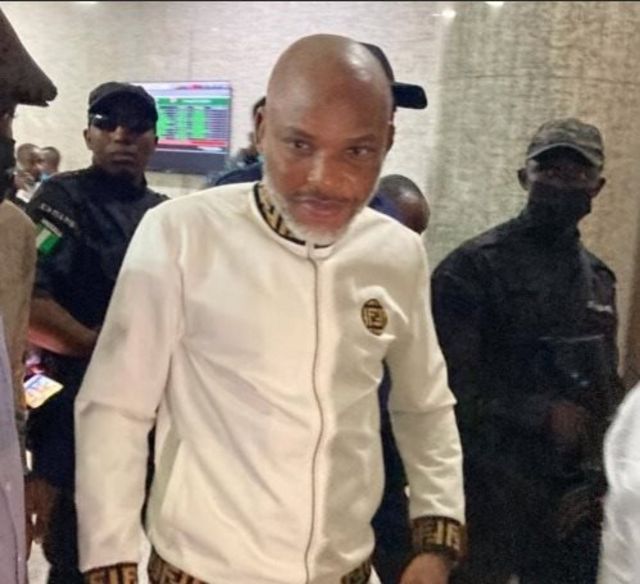 Leader of the Indigenous People of Biafra, Nnamdi Kanu’s legal counsel, Ifeanyi Ejiofor says the Department of State Services has refused to give the IPOB leader his prescribed medication for heart/chest burns for the past nine days.

Ejiofor said Chief Mike Ozekhome, SAN, Kanu’s legal team’s head, gave N1 million to DSS to get Kanu’s medication but the secret police rejected the money, saying it had the financial capacity to provide the drugs.

The lawyer, then, said the DSS has failed to give needed medical attention to the IPOB helmsman, while still detaining him despite court injunctions that have freed him.

Ejiofor revealed this in a statement after a routine visit to Kanu in the headquarters of DSS, in Abuja on Monday.

The statement partly read, “I visited our indefatigable Client – Onyendu Mazi Nnamdi Kanu, today, being the 9th day of January, 2023, at the DSS detention facility, Abuja, where he is still being unconstitutionally held in solitary confinement.

“The legal team spent a greater part of the holidays working discreetly on compelling legal engagements that will ensure/enhance the freedom of Kanu. Hence, this is our first meeting with Kanu in the new year.

“I had fruitful briefings regarding the latest positive update on the hearing of our appeal before the Supreme Court, kudos to the efforts of our erudite Lead Counsel – Chief Mike Ozekhome, SAN. However, the details remain private and will be made public in due time.

“Onyendu reiterated his confidence and optimism on the ability of our legal team, eminently led by the legal Iroko – Chief Mike Ozekhome, SAN, to beat the Federal Government of Nigeria (FGN) to their game.

“Since all channel of complaints to the detaining authority (DSS) has been closed, we have no other option than to always go public to ventilate our grievances with their unlawful activities with respect to their management of Onyendu, and to consequently demand that Onyendu’s full medication, prescribed for the management of his deteriorating health condition be administered immediately and without further ado.”

“Though, our erudite lead counsel – Chief Mike Ozekhome, SAN, immediately swung into action to press for the needful to be done without further ado, it is important to point out that only few weeks ago, a cash sum of N1,000,000.00 (One Million Naira only) was made available to the DSS by our Lead Counsel – Chief Mike Ozekhome, SAN, to specifically be applied for the medical needs, and routine meals of Kanu. Unfortunately, the detaining authority (DSS) refused to accept the money, insisting that they have all it takes to cater to Kanu‘s medical needs and routine meals.

“It, therefore, begs the following questions, to wit: why can’t the DSS take up this statutory obligation of providing for Kanu’s medical needs? Why can’t they provide him with these all important medications, critical to his health? Why are they still detaining Kanu while mischievously refusing to cater to his medical needs?

“What is the justification in detaining Onyendu Mazi Nnamdi Kanu who is merely agitating for the self-determination of the Biafran people, and who had been discharged and his further detention prohibited by the Court of Appeal, meanwhile, the Federal Government of Nigeria is releasing terrorists into the society?

“We are therefore, calling on the Foreign Governments and Agencies, to strongly note the deteriorating state of Kanu’s medical condition, and to prevail on the Nigerian Government to simply obey the Order/Judgment of the Court of Appeal that directed for the unconditional and immediate release of Mazi Nnamdi Kanu, which judgment further prohibited the DSS from further detaining Kanu.

“In conclusion of the exclusive visit, Kanu, specially requested for his goodwill and New Year message be extended to you all, Ezigbo UmuChineke, as he specially conveys his prayers for a better tomorrow for us all.”