Controversial Past Of Sani Adams, Buhari’s Nominee For INEC Commissioner By Alfred Olufemi |The Metro Lawyer 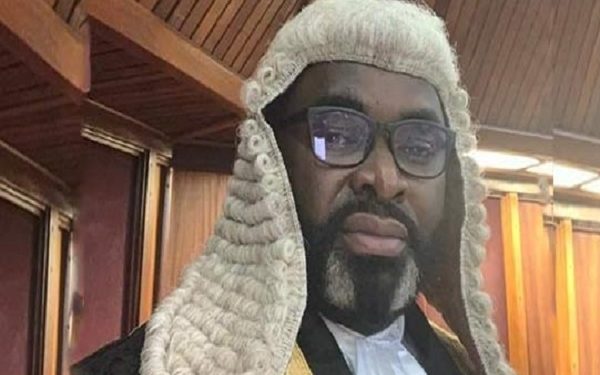 A man being considered by the Senate for appointment as INEC national commissioner, Prof. Sani Adams, was sanctioned on more than one occasion for physical assault, documents obtained by PREMIUM TIMES have shown.

This may be one of the reasons he did not pass the screening exercise of the Senate committee that initially reviewed his nomination.

Of the five persons nominated as national commissioners by President Muhammadu Buhari, two did not pass the screening exercise, the report of the Senate Committee on the Independent National Electoral commission (INEC) stated.

One is the controversial presidential aide, Lauretta Onochie, whose nomination suffered a setback on account of federal character.

Although Ms Onochie, a staunch All Progressives Congress (APC) supporter, had been massively opposed for her partisanship, the committee said her nomination violates the Federal Character Principle.

Her state, Delta, is already represented by May Agbamuche-Mbu, a National Commissioner in INEC, who is still serving.

However, in the case of Mr Adams, the nominee from Plateau State, his integrity was brought to question by his records during his years as an academic.

The committee said it rejected him based on a petition that revisited his past.

According to the Senate Committee, Mr Adams’s appointment was stepped down to allow for further legislative action.

Although the committee did not shed light on the allegations contained in the petition against him, PREMIUM TIMES found out that two cases of assault earned him sanctions at different times.

Mr Adams, a professor of law and a Senior Advocate of Nigeria (SAN), served as a lecturer in the faculty of law, University of Jos, between 1995 and 2007. In between those years, he was indicted for engaging in a physical combat with his colleagues, twice.

The first scenario occurred in an open court, where he engaged another lawyer, James Adokwu, in fisticuffs.

“The attention of the executives of our esteemed Association has been drawn to the shameful misconduct exhibited by both of you on 15 August 2001 in which you engaged your selves in a physical combat in open court,” the Jos branch Vice Chairman of the Nigerian Bar Association (NBA), Sule Kwasau, wrote the two ‘fighters’ on August 22, 2001.

Mr Kwasau said the entire bar received the news of their conduct with rude shock, lamenting that it attracted severe negative publicity to the profession.

“In view of the above, you are requested to give a cogent explanation why disciplinary action should not be taken against both of you. Your response is expected within two days from the date of receipt of this letter.”

Mr Kwasau followed up with another letter addressed to the Dean of the Faculty of Law in UNIJOS, two months later.

He reported the failure of Mr Adams to comply with the directives of the first letter, unlike Mr Adokwu, who complied within the stipulated period.

“Barrister Adams appears to have disregarded our demand,” the NBA official protested.

PREMIUM TIMES, as of the time of filing this report, could not ascertain the cause of the rift between the two lawyers.

Also, the outcome of the correspondence exchanges between Mr Kwasau and the dean is unknown.

Two years after the face-off at the court, Mr Adams was suspended, with half his pay, for physically assaulting a colleague in the faculty of law of the University of Jos.

He had claimed that another male lecturer, Adam Ibrahim, was having an illicit affair with his wife, Aishatu.

But the findings of a committee set up by the school management to look into the matter, revealed that Mr Adams acted on a tip from one of his students, without following due diligence.

“He did not settle down to find out from his wife whether she had any relationship with Adamu Ibrahim or not and whether his wife is a sincere house wife or not. He accosted Mr Ibrahim in his office without any due diligence on verifying the information provided,” the committee report at this newspaper’s disposal, read.

Lecturers in the faculty, who testified before the investigative panel, said Mr Ibrahim was left with torn clothes after his encounter with Mr Adams.

“Sani’s admission of accosting Adamu in the office proves that allegations against him, there is enough evidence before us that Saní took laws into his hands and committed the offence on the 27th October 2003,” the committee cited.

Mr Ibrahim was also suspended following witnesses’ accounts that he was making advances at his colleague’s wife for an illicit affair.

A former Registrar of UNIJOS, A.N Nden, communicated the suspension with half pay as a disciplinary measure against the two lecturers, decided by the committee.

“During the period of suspension, you will be placed on half salary and you are to stay away from the University premises. You are requested to hand over all University property in your possession to your Head of Department.”

The matter was then referred to the Council/Senate Disciplinary Committee, the university’s highest decision-making organ, for further investigation.

However, in a twist of development, the Council Committee decided that the half of his salary, withheld during the period of suspension, be paid.

“The 10th Governing Council at its 2nd regular meeting held on November 23 & 24, 2005 considered the report of its Disciplinary Committee and decided that you should be warned. Accordingly, you are hereby warned to desist from such behaviour in the future in your own interest,” Z. D. Galam, the former Secretary to the Council, further advised.

Sadly, 12 years into his teaching career at UNIJOS, the ‘fighting’ don was laid off. This time, it was not an account of his fisticuffs. He was affected by the downsizing birthed by a government reform in 2007.

The school management said his services were no longer needed, as part of the implementation of the federal government’s Reforms in Ministries, Parastatals, Departments and Agencies set up a Reform Implementation Committee (RIC).

“On the directive of Council, I write to inform you that your services in the University are no longer required and therefore hereby severed. This is in consequence of your being affected by the above reforms. The severance is with effect from Thursday, 31 May 2007. Your terminal benefits will be paid to you from the office of the Accountant-General of the Federation,” the registrar wrote Mr Adams.

Down-sizing in the public sector was one of the implications of the civil service reforms carried out under former President Olusegun Obasanjo, between 1999 and 2007.

The exercise was generally aimed at minimising personnel cost as well as redundancy in the public sector.

Dissatisfied with the severance letter, the don filed a suit against the university in the Federal High Court in Jos.

He prayed that the termination be set aside and that he should be paid all due salaries and allowances.

While his prayers were granted by the lower court on June 6, 2008, the judgment was overturned by the Court of Appeal, when the university appealed the high court ruling.

The university argued that the trial court erred in law when it failed to take into consideration the plaintiff’s stained record of service amongst other grounds.

“The suit at first instance having been taken more than five months after the cause of action had arisen, the cause of action had gone stale and fallen foul of Section 2(a) of the Public Officers Protection Act. This appeal succeeds. The judgment of the trial Federal High Court is hereby vacated and in its place is entered the order of striking out,” Justice Raphael Agbo of the appellate court said in his lead judgment delivered 2013.

Mr Adam’s case with the University of Jos is currently pending at the Supreme Court, according to The Nation’s newspaper.

All efforts to reach the don for his reaction were unsuccessful as a close associate, who promised to put him on the line for enquiry, was yet to get back to our reporter, as of the time of filing this report.

Nonetheless, according to the Senate committee report, Mr Adams has debunked the petition against his nomination, with an explanation that the “situation” occurred on August 15, 2001, when he was a lecturer in the university and it has nothing to do with his integrity.

He supported his claim with a written clearance issued by the Nigerian Bar Association before he was made a Senior Advocate of Nigeria (SAN).