Recall that the spate of conflicting ex-parte orders from the lower courts has taken a drastic turn recently, leading to interventions by the Chief Justice of Nigeria, Justice Ibrahim Muhammad, and the NBA. 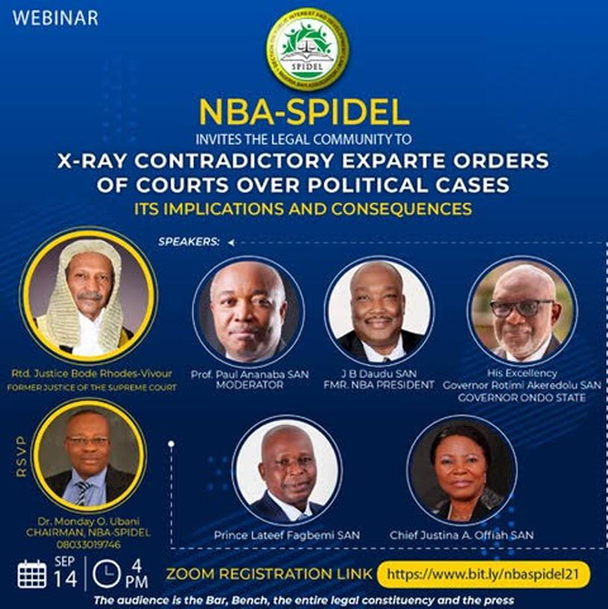 The webinar will hold on Tuesday, September 14, 2021, at 4 pm while the topic is “Contradictory ex-parte orders of courts over political cases: Implications and consequences.”

Justice Rhodes-Vivour will spearhead the discussion by x-raying the entire concept of conflicting ex-parte orders. This tour de force will cover issues ranging from the resurgence of ex-parte orders, forum shopping, politico-legal and systemic implications of conflicting orders to matters relating to the right of fair hearing, infringement of rules of professional conduct and possible sanctions for erring judges.

Coming on the heels of the Keynote Address by Justice Rhodes-Vivour, each Panelist will then address the sub-theme already assigned to them. Among the expected audience are members of the Bar and Bench, law teachers, law students, politicians and media practitioners.

To register for the virtual conference, please click here https://www.bit.ly/nbaspidel21. You will receive a confirmation email after a successful registration.

Recall that the spate of conflicting ex-parte orders from the lower courts has taken a drastic turn recently, leading to interventions by the Chief Justice of Nigeria, Justice Ibrahim Muhammad, and the NBA.

NBA-SPIDEL adjudged as one of the top NBA sections. The section held a highly successful Annual Conference last May in the ancient city of Ibadan.