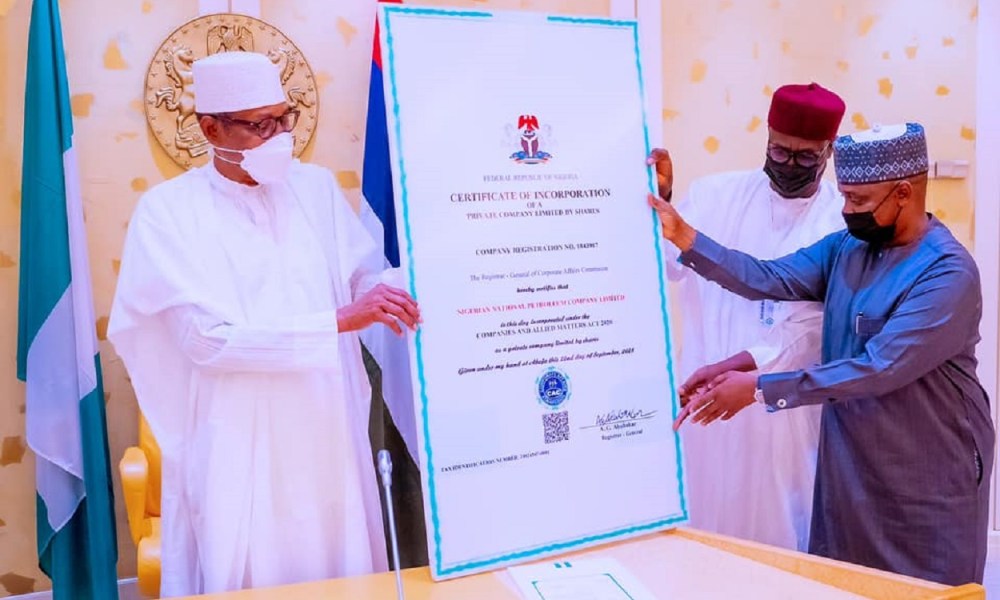 The President, Major General Muhammadu Buhari (retd.), on Friday, received the certificate of incorporation of the Nigeria National Petroleum Company Limited, saying the country expects nothing less from the Board of Directors, the Chief Executive Officer, and the Chief Finance Officer, “than the realization of a global national oil company that this nation desires and deserves.”

Special Adviser to the President on Media and Publicity, Femi Adesina, disclosed this in a statement titled, ‘We expect NNPC to be nothing less than global oil company, says President Buhari’.

Under the recently signed Petroleum Industry Act (2021), the NNPC would operate as a limited liability company.

Buhari described the incorporation as “a significant milestone in our quest to create an enduring National Energy Company that can compete with its global peers and deliver value to its shareholders, the Nigerian people.”

He said his expectation was for a speedy transition through taking all steps required to transfer assets, human and material, “and without wasting time to capitalize the company as required by the Petroleum Industry Act.”

The President also said he was happy to note that the National Assembly has confirmed his nominations for the Board and Management of the two regulatory institutions, and expects immediate take-off to facilitate effective implementation of the provisions of the PIA “on accelerated gas development and optimization of oil production and support for energy transition.”

In his remarks, Group Managing Director of NNPC, Mele Kyari, said the incorporation was “history made again, a massive transformation from what we know, to where we are going,” under the leadership of Buhari.

He added that lots of values have been delivered in the past six years, “and we still have further accountability and values to deliver.”

Registrar/Chief Executive Officer of the Corporate Affairs Commission, Garba Abubakar, said the registration, accomplished within 24 hours, has complied with all requirements of the Companies and Allied Matters Act, and the PIA, disclosing that the new company is one with largest capitalization of N200 billion in the country.

He added that the registration in the short time, “underscores strong collaborations among agencies of government.”