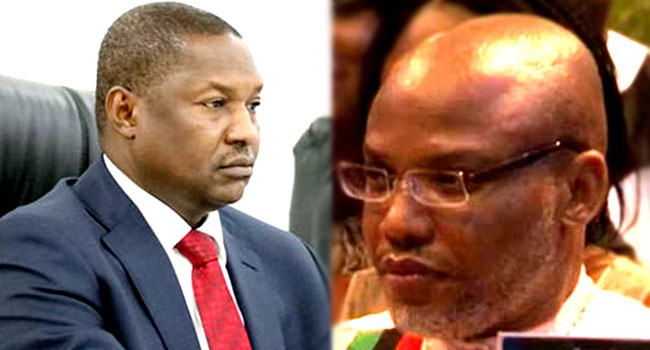 Nigeria’s Attorney General of the Federation, AGF, Abubakar Malami has been challenged to a debate.

Bruce Fein, a United States, US, lawyer of Nnamdi Kanu, leader of the Indigenous People of Biafra, IPOB, challenged Malami to a debate on national television over the legal right of the South-East to agitate for Biafra.

In a series of tweets, the US attorney said Malami would have accepted defeat if he turned down the challenge.

According to Fein: “I challenge Attorney General Malami or his designee to debate me on Nigerian television. Topic: The legal right of Biafrans to self-determination.

“My opponent can use two words to every one of mine. Malami concedes defeat if he scampers away from my challenge.”

Kanu is being held in the custody of the Department of State Services, DSS.

NEWER POSTCopyright Infringement: Court Sets May 25 To Hear A Motion For Injunction Against Transcorp Hilton
OLDER POST2023 And The Imperative Of Women’s Inclusion: Righting The Wrongs By Aisha Waziri Umar