“In my many years as the head of the judiciary, this is the first time we have been given a free hand to fully manage our resources and build to our satisfaction.” 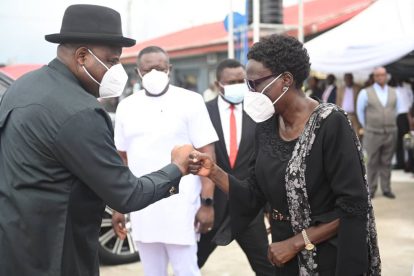 Justice Abiri who stated this on Wednesday in Yenagoa during the commissioning of a renovated court premises and an adapted Lady Justice statue, said judicial autonomy has enabled it to function optimally

The Chief Judge, who commended Governor Diri for prompt release of funds for the judiciary to enable it meet its financial obligations, noted that in her years of service, this was the first administration that had given the judicial arm of government the free hand to manage its resources.

“The commissioning of the newly renovated court premises and the Lady Justice statue was made possible by the appreciable implementation of the financial autonomy in Bayelsa State by Governor Diri.

“In my many years as the head of the judiciary, this is the first time we have been given a free hand to fully manage our resources and build to our satisfaction.”

In his response, Governor Diri said he believes the judiciary should be given financial autonomy to enable it function effectively.

According to him, as a democrat, he believes the only way for democracy to thrive is to ensure checks and balances and the separation of powers of the arms of government.

The governor also called for more collaboration among the various arms of government to work in synergy to achieve common goals.

He commended the judiciary for making judicious use of the funds at its disposal, which led to the completion and commissioning of the project.

“I believe in the doctrine of separation of powers and, of course, checks and balances. That is the only way our developing democracy can be fostered here in Nigeria. So, I believe that the judiciary should have its autonomy to do what we are about to commission today; autonomy to manage its resources even though we all know that the arms of government are one and the same.

“For us as a state, we cannot afford at this time to be working at cross purposes, particularly the three arms of government. This is the time that we need each other. This is the time we need to function as one so that government as one body will be able to deliver the expectations of the people of Bayelsa State.”