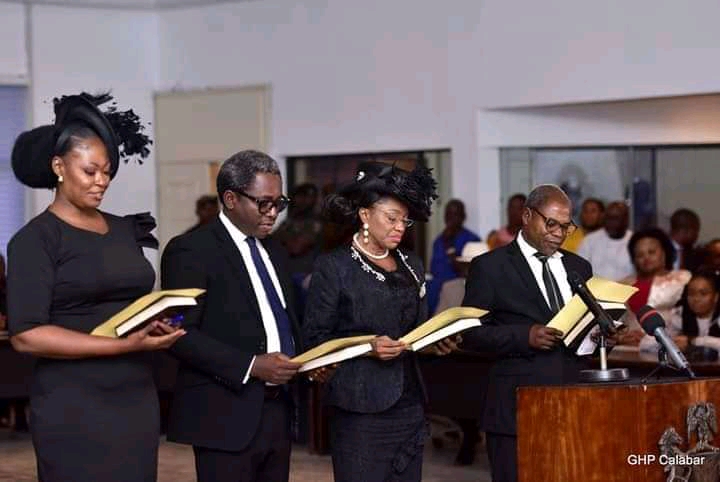 Governor Ben Ayade of Cross River State on Tuesday swore in Justice Maurice Eneji as the new President of the state’s Customary Court of Appeal.

Speaking at the event held at the State Executive Council Chamber, Ayade decried the poor salary structure of judges in the country, vowing that despite the lean financial resources, Cross River would be the torchbearer in upping the standard of living of judges by reviewing their salaries.

The governor said he would meet with the state House of Assembly to ensure the new salary structure for judges takes effect by the first of March.

According to him, “this is a very clear statement that will charge the whole federation to look into the issue of the salary of judges.

“From the 1st of March, the salary of our judicial officers in Cross River State will be changed for good. We will increase your salaries so that other states can know that Cross River, which is number 35 out of 36 states in terms of federal allocation can increase the salary of judges.

According to the governor, “Cross River State will enact the appropriate law in partnership with the legislature so that by March, we will have a new salary structure for our judges”.

He charged Justice Eneji and the new judges “to be shining examples of Cross River”, admonishing them to be “a shining star, be that agent of change that will bring fairness, justice, goodness, kindness and sincerity to the judiciary as a whole”.

“As you hold your Bible today while taking the oath, do not forget the significance of that Bible, let your God be your watchword, let indeed, the fear of God be your guide because your children and grandchildren will reap from what you do.

“Let it not be that when you judge on earth and by the time you go to heaven to be judged you will be sent to hell.”

He reminded the judges that both the common man and the elite solely depend on the judiciary for justice as the last bastion of hope and must not, therefore, compromise justice”, the governor charged the judicial officers.

In his remarks, Justice Eneji, who was a one-time acting Chief Judge of the state, described Ayade as the most judiciary-friendly governor.

He recalled that the governor assumed office in the heat of restiveness in the Cross River judiciary due to a backlog of unpaid allowances but was able to calm frayed nerves.

“Let me say this on record, Your Excellency, you are the most judiciary-friendly governor. This is the third time you are swearing-in judges into office.

“And also, before you came to office, the judiciary was owed a backlog of allowances for about two years, unfortunately, you came on board when the judiciary staff were angry and decided to go on strike but in your humane nature, you gave us your word and said from this day on, this is what I can do.

He appealed to Ayade for a more expansive and befitting judiciary headquarters in the state as according to him, the existing one is too small for the Cross River judiciary.