Are Surrendering Boko Haram Insurgents Prisoners Of War And Entitled To Rehabilitation? (Part 1) 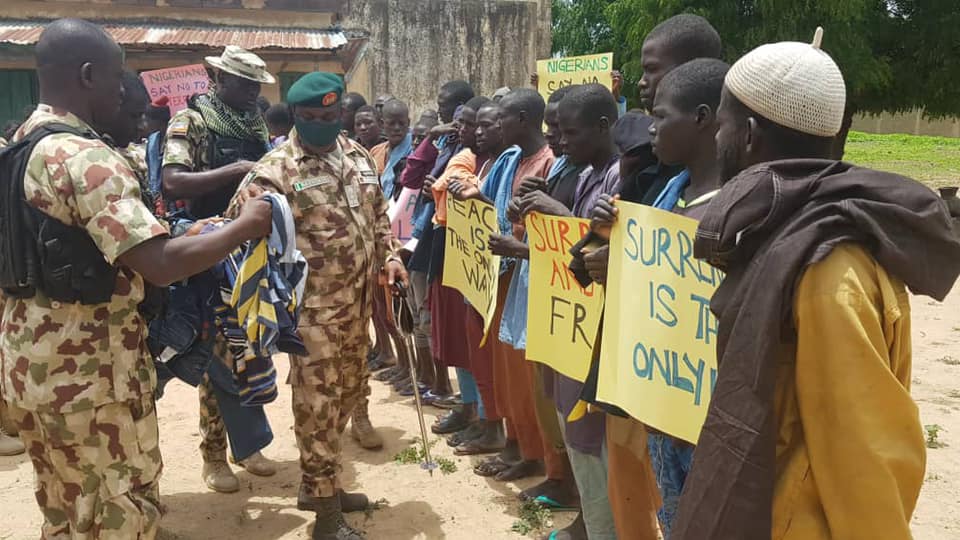 Article 4 of the Geneva Convention on the treatment of Prisoners of War, 1949, describes Prisoners of War by compartmentalising them in two categories: A and B.
Under category A, Prisoners of war are persons belonging to one of the following categories, who have fallen into the power of the enemy:
Members of the armed forces of a Party to the conflict, as well as members of militias or volunteer corps forming part of such armed forces;
Members of other militias and members of other volunteer corps, including those of organised resistance movements, belonging to a Party to the conflict and operating in or outside their own territory, even if this territory is occupied, provided that such militias or volunteer corps, including such organised resistance movements, fulfil the following conditions:
a.that of being commanded by a person responsible for his subordinates;
b.that of having a fixed distinctive sign recognisable at a distance;
c.that of carrying arms openly;
d.that of conducting their operations in accordance with the laws and customs of war.
Members of regular armed forces, who profess allegiance to a government or an authority not recognised by the Detaining Power.
Persons who accompany the armed forces without actually being members thereof, such as civilian members of military aircraft crews, war correspondents, supply contractors, members of labour units or of services responsible for the welfare of the armed forces, provided that they have received authorisation from the armed forces which they accompany, who shall provide them for that purpose with an identity card similar to the annexed model.

Members of crews, including masters, pilots and apprentices of the merchant marine and the crews of civil aircraft of the Parties to the conflict, who do not benefit by more favourable treatment under any other provisions of international law.

Inhabitants of a non-occupied territory who, on the approach of the enemy, spontaneously take up arms to resist the invading forces, without having had time to form themselves into regular armed units, provided they carry arms openly and respect the laws and customs of war.

Under category “B”, the following shall likewise be treated as Prisoners of War under the Convention:
Persons belonging, or having belonged, to the armed forces of the occupied country, if the occupying Power considers it necessary by reason of such allegiance to intern them, even though it has originally liberated them while hostilities were going on outside the territory it occupies, in particular, where such persons have made an unsuccessful attempt to rejoin the armed forces to which they belong and which are engaged in combat, or where they fail to comply with a summons made to them with a view to internment.

The persons belonging to one of the categories enumerated in the present Article, who have been received by neutral or non-belligerent Powers on their territory and whom these Powers are required to intern under international law, without prejudice to any more favourable treatment which these Powers may choose to give and with the exception of Articles 8, 10, 15, 30, fifth paragraph, 58-67, 92, 126 and, where diplomatic relations exist between the Parties to the conflict and the neutral or nonbelligerent Power concerned, those Articles concerning the Protecting Power. Where such diplomatic relations exist, the Parties to a conflict on whom these persons depend, shall be allowed to perform towards them the functions of a Protecting Power as provided in the present Convention, without prejudice to the functions which these Parties normally exercise in conformity with diplomatic and consular usage and treaties.

Flowing from the detailed definitions provided by the Geneva Convention above, a Prisoner of War is a combatant or non-combatant – whether a military member, an irregular military fighter, or a civilian – who is held captive by a belligerent power during or immediately after an armed conflict. These categories of persons are defenceless, having fallen into the power of their enemies; and under those circumstances, the law mandates that these persons should be treated humanely, without any adverse distinction founded on race, colour, religion or faith, sex, birth or wealth, or any other similar criteria.

Rule 3 of the Customary International Humanitarian Law (CIHL) provides that:
“All members of the armed forces of a party to the conflict are combatants, except medical and religious personnel”.

Under Rule 47 of the CIHL, attacks on Persons Hors de Combat are prohibited. A person hors de combat under Article 47 is:

(a) anyone who is in the power of an adverse party;
(b) anyone who is defenceless because of unconsciousness, shipwreck, wounds or sickness; or
(c) anyone who clearly expresses an intention to surrender; provided he or she abstains from any hostile act and does not attempt to escape.

Similarly, under Article 3 of the Geneva Convention on the treatment of Prisoners of War, 1949, it is provided that in the case of armed conflict not of an international character occurring in the territory of one of the High Contracting Parties, each Party to the conflict shall not subject persons that are not taking part in the hostilities, including members of armed forces who have laid down their arms and those placed hors de combat by sickness, wounds, detention, or any other cause, to:
a. violence to life and person, in particular murder of all kinds, mutilation, cruel treatment and torture;
b. taking of hostages;
c. outrages upon personal dignity, in particular, humiliating and degrading treatment;
d. the passing of sentences and the carrying out of executions without previous judgement pronounced by a regularly constituted court affording all the judicial guarantees which are recognised as indispensable by civilised people. Furthermore, Article 1 (Convention (IV) Respecting the Laws and Customs of War on Land and its Annex: Regulations concerning the Laws and Customs of War on Land. The Hague Convention, 18 October, 1907) and the Hague Regulations provide that the laws, rights and duties of war apply not only to armies, but also to militia (Boko Haram, ISWAP, ISIS, inclusive) and volunteer corps fulfilling four conditions:
1. To be commanded by a person responsible for his subordinates;
2. To have a fixed distinctive emblem recognisable at a distance;
3. To carry arms openly; and
4.To conduct their operations in accordance with the laws and customs of war.

Legal Proceedings Against Prisoners of War

NEWER POSTDavido’s Lawyer Searches For, Offers Legal Services To Man Vibing To IF Song After Arrest In The US
OLDER POSTLagos, Technology And The Wheel Of Justice By Toyosi Ogunrinde