"May I also call on government to increase financial allocations that will enable us to introduce technical innovations that would improve adjudication," she said. 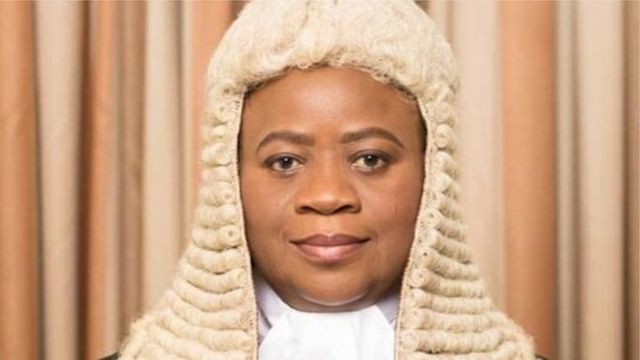 The President of the Court of Appeal, Justice Monica Dongban-Mensem, has appealed to the Federal Government for an upward review of the salaries of judicial officers in the country.

Justice Dongban-Mensem who made the appeal on Monday in Abuja at the maiden edition of Court of Appeal Legal Year and Justices Retreat revealed that salaries of judicial officers had been stagnant for the past 10 years.

According to her, the Chief Justice of Nigeria (CJN), who is the Head of the Judiciary in Nigeria, as at today takes home N279,497 as monthly salary, while his brother justices on the Supreme Court bench go home with N206,425.

She said it was disheartening that the salary structure for judicial officers and staff in Nigeria had consistently ranked poorly when compared to that of their counterpart in other African and Commonwealth countries.

Justice Dongban-Mensem recalled that the last time salaries of judicial officers were reviewed in Nigeria was in 2008, when the upward review was made to take effect on February 1, 2007.

She therefore called on the federal and states governments to leave up to their obligations under the implementation of financial autonomy of state legislature and the state judiciary order, known as Executive Order 10.

“I implore the government of the federation and states to urgently review the salaries and allowances of judicial officers and staff.

“The salaries of justices are static with no graduation as in the civil and public service. We have been on one salary grade for over 10 years now.

“May I also call on government to increase financial allocations that will enable us to introduce technical innovations that would improve adjudication,” she said.

She added that out of the appeals 2,169 appeals were dismissed while 942 appeals were upheld as at August 31.

She decried what she described as the spate of multiple suits and appeals the court was currently handling saying it was an alarming trend that must be addressed by all stakeholders in the legal profession.

“While the Chief Justice of Nigeria has demonstrated resolute leadership in addressing the issue of conflicting rulings by the bench, I call on the bar to also do likewise to clear the augean stables of such unethical conduct, which unduly swell up the appellate docket.”

While saying that the court welcomed constructive observations that would enable the judges better perform their duties, she urged the bar to desist from maligning the character of justices just because the decisions of a panel did not favour their client.

“I also call upon the bar to be the guardians of the law and legality, shunning sharp practices and frivolous appeals, which are otiose and speculative.

“Legal practitioners must be mindful of the Rules of Professional conduct and shun all unethical, corrupt and insidious practices that can bring disrepute to the noble profession.

“I assure you that any indiscipline by lawyers will not be tolerated and the court will not hesitate to refer any unscrupulous Legal practitioner to the Legal Practitioners Disciplinary Committee.”

For his part, the Attorney-General of the Federation and Minister of Justice, Mr Abubakar Malami, (SAN), appealed to the appellate court justices to maintain the sanctity and credibility of the court.

This, he said was to ensure that the sacred integrity reposed in the appellate court remained un-shaking at all times in order to foster and promote public confidence in all their judgments.

Malami also gave the assurance that the administration of President Muhammadu Buhari was working to review the welfare of judicial officers generally to ensure greater efficiency.

“I am happy to inform you that the Federal Government under the leadership of President Mohammadu Buhari is once more revisiting the issue of the welfare of the judicial system generally.

“Very soon the committee report which is being accorded attention by the President will certainly come to pass and the welfare of the judiciary will in effect be enhanced accordingly for greater efficiency of the system,” Malami said.

The News Agency of Nigeria(NAN) reports that dignitaries present at the event included the FCT Minister, Mr Mohammed Bello, the Minister Works and Housings, Mr Babatunde Fashola, and retired and serving judges of courts.