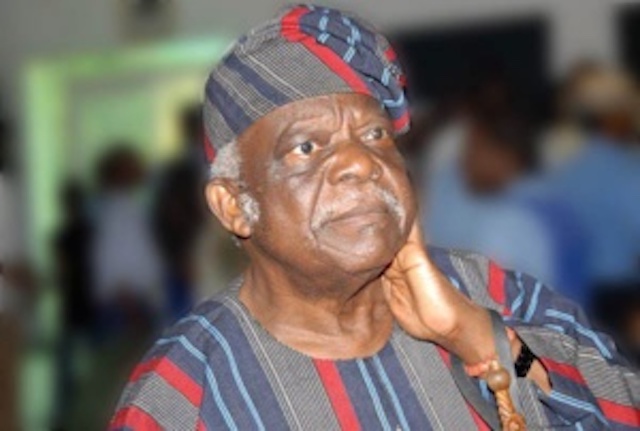 The popular soap opera, THE VILLAGE HEADMASTER, that dominated Television screens between 1968 and 1988 has re-echoed in court over copyright ownership.

Olujimi Olusola, son of Ambassador Olusegun Olusola, has slammed a N101.5billion suit on the Nigerian Television Authority NTA, claiming his father was the rightful owner of the copyright.

Olujimi alleges infringement of the copyright of his father’s works.

A 33 paragraph statement of claim was filed before a Federal High Court in Lagos , by a Professor of intellectual property Bankole Sodipo.

Olujimi who is suing as Executor and beneficiary to the Estate of Ambassador Olusegun Olusola avers in an affidavit that, the VILLAGE HEADMASTER was authored by his father as an unpublished literary work around 1957 in his personal capacity and not in the course of employment of any organisation.

He states as follows:

His terms of employment in the features department did not require him to create a local programme.

There was very little local broadcasting programming in 1958 at WNBS when literary work, the village Headmaster was first adapted for radio broadcast at the WNBS.

None of his colleagues was promoted or demoted for failure to create a radio or Television drama series.

His 1957 literary work, the VILLAGE HEADMASTER was first adapted for radio by the owner of the intellectual property rights therein and broadcast around 1964.

It was adapted for Television around 1964. But it was not broadcast until 1968.

For over three decades, Ambassador Olusola was confirmed as the creator of the Village Headmaster in all its radio and TV adaptations.

It was broadcast on Television for about ten years before the creation of NTA in 1977.

The plaintiff avers further that by virtue of his father’s copyright, he has the exclusive rights to preclude any other person including the defendants and members of their class inter from producing the literary work, adapting it for Radio, Television, theatre and, like or broadcast it in any form.

Counsel to the plaintiff had previously written NTA to desist from any attempt to infringe on the intellectual property rights in the Village Headmaster.

But NTA had falsely asserted ownership of the copyright in the Village Headmaster on the false assumption that the VILLAGE HEADMASTER was created by Ambassador Olusegun Olusola in the course of his employment with the NTA.

In a press briefing and on its website Wale Adenuga production stated that it has signed an agreement with NTA to produce the village Headmaster which was created by Ambassador Olusegun Olusola,

Adenuga has also started recording and producing the Village Headmaster and that it will soon start broadcasting it.

The production will feature the same characters created by Ambassador Olusegun Olusola.

Olujimi claims N100 Billion damages against the NTA and Adenuga for the infringement of the copyright and allied intellectual property rights of the Village Headmaster.

Olujimi also claims additional N500million for passing off the Village Headmaster or the characters herein as if it is the plaintiff’s.

However in a statement of defence on behalf of Wale Adenuga Production and Chief Wale Adenuga, a Lagos lawyer, Ademola Adegbite, relying on a witness statement, denies the claim of the plaintiff.

He says during the lifetime of Ambassador Olusegun Olusola, his copyright ownership was disputed by Sanya Dosumu, his colleague.

Sanya Dosumu is still alive and well and is now the Olowu of Owu kingdom in Abeokuta in Ogun State, as Oba Sanya Dosumu.

Apart from The Village Headmaster,other programmes produce exclusively for NTA were CORK CROW AT DAWN, MASQUERADE,AM EXPRESS by Peter Igoh and others who were late Ambassador Olusegun Olusola’s Colleagues at NTA.

Barrister Adegbite, according to the affidavit by Oyeleye Samuel Adenekan contends Ambassador Olusegun Olusola in his lifetime failed to take necessary legal step to protect his copyright in The Village Headmaster, if at all it exists.

Consequently the facts show beyond doubt that the plaintff’s claim to copyright of The village Headmaster is in the realm of imagination without any bearing on the reality on ground.

The defendants will contend at the trial that the suit is frivolous, gold digging and without substance and must be dismissed with substantial cost.

Also Barrister Yusuf Ali SAN, who is acting for NTA counters that Ambassador Olusegun Olusola during his lifetime never challenged the copyright of the NTA over the village Headmaster.

He says it was the understanding and practice at the relevant time that artistic work created in the course of employment with the NTA belongs to NTA .

He says further stated that there is no valid or subsisting copyright which gives the plaintiff exclusive copyright to the work.

NTA avers further that even if Ambassador Olusola was the copyright owner of the village Headmaster, the right has extinguished or expired by effluxion of time having been broadcast or published for more than 50 years.

NTA also prays the court to dismiss the plaintiff claim for being frivolous, vexatious, and gold digging.

When the matter was mentioned Mr Femi Fajolu appearing for the plaintiff told the court that the parties are trying to settle the matter out of court.