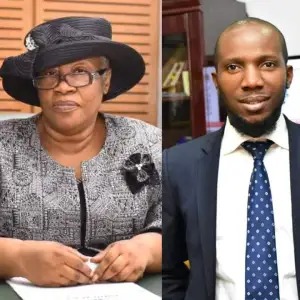 The Chief Judge of Akwa Ibom State, Justice Ekaete Obot, has expressed her anger against a Lagos-based lawyer and human rights activist, Inibehe Effiong, asking him to behave himself or risk being sent to prison.

The CJ’s anger followed the lawyer’s insistence that his client, Leo Epenyong, did not have “confidence” in Obot to determine the matter before her, alleging bias and the likelihood of bias in handling the matter.

In suits No. HU/279/2019, between Governor Udom Emmanuel and Leo Ekpenyong, and No. HU/273/2019 between Senator Effiong Bob vs Leo Ekpenyong delivered in 2021 by Justice Obot, the defendant was found guilty of libel and was asked to pay the sums of N1.5 billion and N150 million to the governor and the senator, respectively.

However, Effiong, who is counsel to the defendant, filed a motion for the judgement to be set aside, insisting that his client was not given a fair hearing; the prayer was later granted by the court.

But the defence counsel also filed another motion praying the chief judge to recuse herself from the case, alleging prejudice and likelihood of bias.

Infuriated by the submissions of the defence counsel and his refusal to sit down when counsel to claimant, Samuel Ikpo, asked him to during the proceeding held at High Court 1, Barracks Road, Justice Obot retorted, “You cannot say that before me, you can’t talk to your senior like that, I don’t know when this man learnt law.

“You are trying to intimidate your senior, did you see the type of counter you filed over miscellaneous matters I overlooked? I still set aside that judgement only for you to capitalise on it and you want to play on the intelligence of the court? Do not allow me to send you to prison!”

“Saying that when a matter is set aside that it must be reassigned to another judge is not the practice; it is a lie from the pit of hell,” she added.

The judge, however, proceeded with the hearing of the witness of the claimant and later adjourned the case to 27 to 29 July for the conclusion of the claimant and hearing of the defendant’s case as well as motions filed even when the defence counsel said the dates were not convenient for him insisting that the case was that of defamation and no urgency in it for accelerated hearing.

Speaking shortly after, the Lagos-based lawyer maintained that he did not have confidence in the CJ to determine the matter.

Effiong said, “I have been described in venomous terms. We know that by law, a court should not address a counsel in that manner. The seeming hostility that characterised the proceedings to set aside the default judgement is discouraging.’’