Speaking at the unveiling of the Arena, legal luminary and Senior Advocate of Nigeria (SAN), Yakubu Chonoko Maikyau, commended the Jimi Poko-led Abuja Lawyers Soccer League for connecting to the need of the kids and young persons in the Durumi Internally Displaced Persons (IDP) Camp. 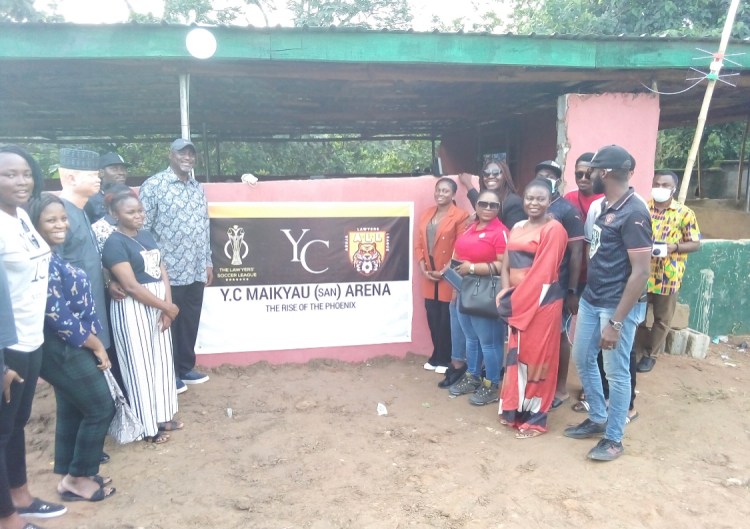 Excitement and jubilation filled the hearts of the kids in the Durumi IDP Camp in FCT as Abuja Lawyers Soccer League built and donated an Entertainment & Sports Arena to the Camp at the weekend for the view of the inhabitants.

The arena, which is named after famous Abuja-based lawyer, Yakubu Chonoko Maikyau (SAN) is where fans and the kids would want to be, feeling incredibly close to the actions from the English Premier League (EPL), cartoons and other entertainment channels.

The coordinator of the Abuja Lawyers Soccer League, Barrister Olujimi Olujide Poko, said the arena was put together with contributions from friends, colleagues and family members.

“Their current situation is not their doing and they are citizens like us but one way or another they have been denied what we enjoy as citizens. We don’t have the millions to have proper building or big project here and what we do in Abuja Lawyers League is football and law, and the only way we can reach out to them is to create an entertaining center, arena for them to also watch the game of football and other programs they would be watching on the goal TV.

“What you’re seeing today is the N1000, N2000 donation from colleagues, friends and family members. We received donations as low as one thousand and as high as 50 thousand naira. We believe in a better time for Abuja Lawyers League and ensure that the goal TV is adequately subscribed for them.

“Our target is the kids from five and 15 years old and by the data of the camp there are about seven hundred and forty of them here, but the hall we have here now can only take 200 of the kids. That means we still need as much as we can do for them,” Poko said.

Speaking at the unveiling of the Arena, legal luminary and Senior Advocate of Nigeria (SAN), Yakubu Chonoko Maikyau, commended the Jimi Poko-led Abuja Lawyers Soccer League for connecting to the need of the kids and young persons in the Durumi Internally Displaced Persons (IDP) Camp.

“I commend this initiative. Jimi Poko and his team have been in the forefront of developing the other skills that the lawyers have in them in the area of soccer, they are the ones that are responsible for the Lawyers Soccer League in Abuja. We had a wonderful tournament that they named after me, ‘Maikyau Cup’, and we had about 16 teams that participated in the competition and they were all lawyers.

So, we are not just persons in court, we are everywhere and that is why we are learned men. If you take us to the field of engineering we would have work to do or any field we will fit in there and contribute value, that is what Jimi Poko and his team are doing in this area and they have escalated it to the point of performing what can be described as corporate social responsibility.

“They have identified this place and come to put this big screen here. They spent their money, time and resources to establish this arena for the purpose of serving the children and young persons that are in this camp. That is highly commendable and pray that God almighty would continue to honour them and replenish those purses from which they brought all that they had to spend for the purpose of putting this together.

“One thing that humbled me is the fact that they decided, for whatever reason and I do not deserve it, to name this place after me. They named it Y.C. Maikyau (SAN) Arena ‘The rise of the Phoenix’ . I don’t deserve it and I don’t know why they did it, if it is for the love they have for me, I appreciate it most sincerely and I pray that God almighty would honour you in return.

“I would like to say that the rise and reposition of this country actually lies in the hands of the young persons led by young lawyers. Absolutely so and we have proof to show for that.

“I’m somebody who is very confident in project Nigeria, I believe in Nigeria and I believe Nigeria is doable. But the young ones have to be given the opportunity to showcase their potential and only to be guided by experience of the olds. I like to see a convergence of that experience and the potential and energy of the young people in the area of governance.