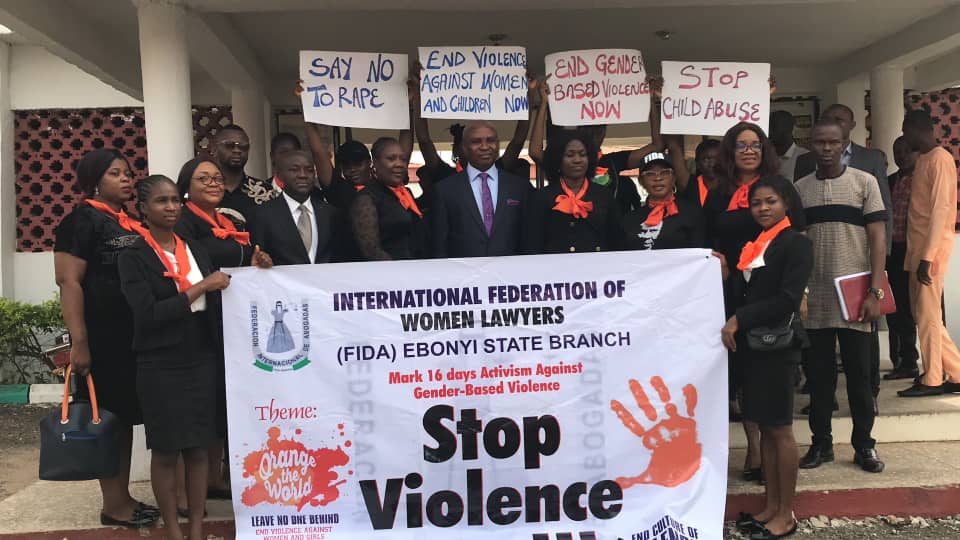 The International Federation of Women lawyers has called for establishment of special court to try cases of gender-based violence.

The call was made by the chairperson of the FIDA, Ebonyi State Chapter, Grace Chima, on Saturday in Abakaliki.

She spoke with newsmen as part of events marking this years 16 days of activism.

She emphasised that creation of Gender-Based Violence Court would not only speed up justice delivery, but ensure that victims of gender-based violence get redress.

Speaking on the theme for the year: “End Violence Against Women and Children Now,” Chima noted that women and children are both special and critical segment of society, deserving care and a sense of belonging rather than abuses.

She further called on parents and guardians to take full responsibility of their children to avoid being abused and encouraged all and sundries not to hesitate to report any form of violence mated against women and children to appropriate authorities for prompt action.

Highlighting the role of FIDA, she maintained that she has played a significant role as the Ebonyi chairperson to ensure that gender based violence is reduced to the barest minimum.

The Chief Judge of Ebonyi State, Justice Elvis Ngene, in his remarks, described violence against women and children as barbaric and inhuman.

Ngene recalled his efforts towards ending the act, even before becoming the Chief Judge, and applauded the efforts of FIDA for the numerous interventions and rescue missions they have embarked upon in the fight against gender based violence in Ebonyi State, pledging to give them maximum support and ensure speedy Justice delivery.

Ngene stressed: “I want to commend FIDA, Ebonyi State chapter for the marvellous work you have been doing.

“I am aware of the numerous interventions you have made in no distant past.

“I am also aware of the rescue missions you have embarked upon to salvage the battered and the oppressed.

“I commend you highly and pray that you sustain the tempo.

“I must tell you, I didn’t just start now.

“When I was the administrative judge of Afikpo, I had numerous cases of violence against women and children, and as a presiding judge, I had to intervene and took it upon myself to ensure that anybody who is accused of rape, defilement never received bail while I was there for six years.”

Ngene maintained that the Family Court established in all the three senatorial zones of Ebonyi State have been designed and empowered to deal decisively with matters relating to violation of children and women.

He however observed that there was the need for them to restrategise with Ministry of Justice to ensure that matters reported to them were expeditiously dealt with.

The Chief Judge encouraged FIDA not to allow the tempo to subside, but work harder to ensure that violence against women and children were eradicated in the State, with sanity restored to human society.

The group had earlier embarked on road walk through major roads and streets in Abakaliki, to create awareness about gender based violence and the need to end the practice.